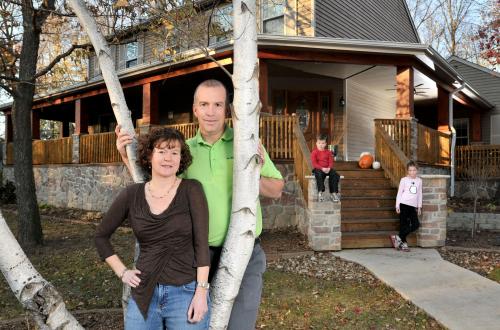 Andi Schlabach knew exactly where she wanted to live when she and husband Duane were planning to move from Indiana to Monticello.
“I just loved this neighborhood. It’s beautiful,” she said of the Turtle Pointe subdivision. “I like the mature trees.”

She also saw the potential of the home they bought there. But one of her first comments was, “It needs a front porch.”

The home had a flat front and very square look, with steep steps leading to a small porch outside the front door. The couple talked about building a porch, but other house projects took priority.
The front porch was never far from Duane’s mind though.

“Every time I mowed the yard for two summers, I’d be walking around and looking at the house, thinking ‘How is this going to look?'” he said.

A friend, Wilmer Otto of Arthur, was helping Duane build a deck on the back of the house, and the two would go to the front yard and talk about how they would build the front porch. One issue — the yard sloped near the garage, and a retaining wall had been put in to hide the problem. They puzzled over how to make that area look better.

“We finally decided we would wrap the porch around to the garage, and have a step off and a little deck coming off of it,” Duane said.

The next issue was the base of the porch. Andi had always wanted brick, but that would require digging to put footers into the ground, which could kill some of the trees — something Duane did not want to do.
They kept bouncing around ideas. Andi suggested moving the front door from the center of the house to the corner. Duane didn’t think it would work, until he saw a friend’s house with a similar design. His brother, who works for Okaw Truss in Arthur, helped design the roofline and assured Duane it would work.

The corner of the first floor was cut off for the new front doorway, and the second story above it is supported by trusses tied into the wall on either side of the door and into the corner posts of the porch.
The Schlabachs decided to wrap the porch clear around the west side of their home, to make it look more balanced.

When they began looking at brick, a salesman at Clayton Sales Co. in Decatur talked to them about cultured stone. It looks like cobblestones but is light enough that it doesn’t require footers for support.

During the summer of 2010, Duane and Wilmer Otto did nearly all the work building the porch. Duane, a nurse at Kirby Hospital, worked three 12-hour shifts per week, and spent his days off working on the porch.

He and Otto set the posts, framed the porch, laid the floor and built the railing. With help from Duane’s brother and another friend, they installed the wooden beams around the perimeter of the porch that support its roof and put up the roof trusses.

Duane and Otto also built a ledge at the base of the porch and put up a plywood wall behind it to support the cultured stone facade. Chuck Sollers of Philo installed the stone. A small, rather awkward foyer inside the original front door became an office. A bedroom at the front of the house became the new foyer.

“It changed the whole inside of the house,” Duane said. “To me, the house is much more comfortable now.”

The project took about seven months to complete. The porch is wired for speakers and the Schlabachs installed ceiling fans. They plan to get a porch swing. Duane jokes the porch reminds him of Cracker Barrel.

“Especially when the trees are all green, it’s really neat to hang out,” Duane said. “It’s the times when you sit and talk about life.” 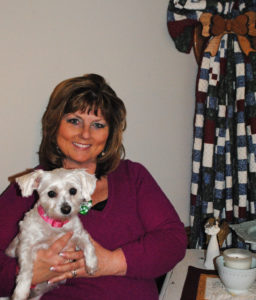 At Home with Cheryl Sizer

Janice Bahr compares the process of redecorating a home to having surgery.