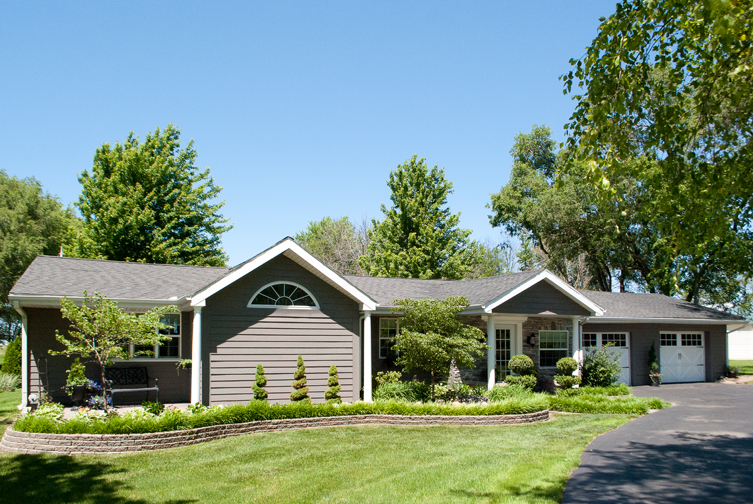 When Lisa Amebeli purchased her rural Champaign ranch, she knew it was going to be a lot of work to get the place in line with the vision she had for the 3-bedroom, 2-bath home with vaulted ceilings and an open floor plan.

“I recruited everybody,” she said from her patio that is decorated with a sea theme. Sea shells and fish décor accented the space.

That’s the modus operandi of most ‘do-it-yourselfers.’ They know other brave fixer-upper types and they pick each other’s brain for ideas. Then, they usually lend each other a hand in the renovation. That’s how Amebeli proceeded with her home transformation.

Since it was warm when she bought the house, they started outside, and cleaned up the façade and also the yard.

“We took down these bushes that were as tall as the house. We took down all these fences. They were everywhere,” she said.

When the weather chilled, they tackled the inside.

“We started in the galley kitchen. I wanted it to be functional. It had hanging cabinets and a door that broke up the space,” she said.

They moved the door further away towards the center of the east wall. Amebeli said it was a brilliant idea.

Next, they reconfigured the flooring. She is still in the process of figuring out the transition pieces. Homeowners know a house is always in some kind of state of transformation. Next, they tackled painting. The ceiling was a salmon color. They painted it an eggshell white. It’s textured, so it was a little intense. They had to use thick, wool-like rollers that could hold intense amounts of paint and reach into the ridges of the textured ceiling.

“Every project we’ve taken on was a nightmare! Nothing was square! The house is over 100-years-old, so things have settled. We replaced doors with windows. The former owners had exterior doors in a couple of the bedrooms. We replaced flooring, baseboards, windows and every counter top. Making things “square” was hard. I just split the difference in the measurements,” she said.

The big projects were a little daunting. There are some great DIY feats, too, in Amebeli’s house. She built the bathroom sinks out of scrap wood, and she floated the counter tops on the top of the wood. It has a rustic elegance to it, as well. Likewise, they used pallet wood as paneling. The greys and browns tie in nicely in the master bedroom, especially.

“Whenever I decorate, I incorporate the same color family and the same materials throughout a home. I’m not one to have completely different themes in every room. It makes things flow, and it brings the home together. Another thing we did that makes a big impact is to change out the lighting. That can really date your home,” she said.

All in all it was a satisfying experience. Like the travertine tile, which is a form of limestone deposited by mineral springs, especially hot springs. It has a fibrous or concentric appearance.

“It has holes in it, and I like the look of it. My friend, Tammy Umberger and I figured out a way to put the grout in the tile, so we wouldn’t block the holes,” she said.

When installing tile, one of the finishing touches is to spread the grout over the tile and then wipe it away. However, with the travertine, it wasn’t so easy. That method would have completely covered the small holes and pits of the travertine tile.

“We used ketchup and mustard dispensers to put the grout in. We squeezed it directly into the spaces between the tile, so it took a lot more time to complete the project. It took a while, but we had a lot of fun. Tammy is up for anything,” Amebeli said.

Amebeli truly proves that the adage of “Don’t judge a book by its cover,” it certainly true. She is a tiny and very feminine dark-haired woman, and based on appearances, one would assume her biggest task would be to plant flowers or maybe paint a wall. The strength, tenacity and talent with the renovation on her ranch home was no small feat. She insists that friends and family made it possible, too. Along with Wilson, she thanks her sister, Stephanie Amebeli, Andy Meyers- her sister’s boyfriend- and her mother, Esther Nixon.

“I could not have pulled it off -or pulled myself together-without the help of some unbelievably loyal and supportive friends. I’d like to thank Greg Tatman, Beth Hunt Graham, Fran Heinz, Tammy Umbarger, Michelle Walsh, Resa Denisar Mayor, Cheryl Huffman, Lindsay Ribbe Riesel, Michelle Zimmerman, Bradley Hadfield, Tracy Ann, Darrel Sharp, and of course the world’s best neighbor, Jeremy Shafer. I want to thank them for helping me get through it,” she said. 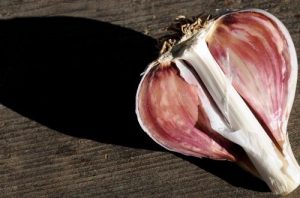 Grow your own garlic

The garden offers more flavorful varieties than the grocery store.