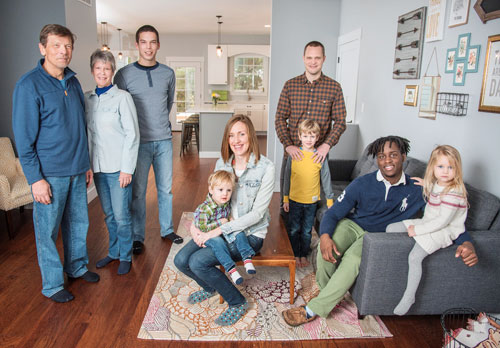 When Mel Fros builds a home, it’s no ordinary house.

When Mel Fros builds a home, it’s no ordinary house. It has thought behind it; a purpose, function, sustainability and meaning to the structure. It also has great beauty. He’s an artist, and he wrestles with his art until it is just right. The bungalow in Urbana is no exception.

It started out as a lesson for his son, Daniel, an aspiring master builder.

It ended up being a nest for a young minister and his growing family. The home itself brought two families together; they now play games in the yard, cook and hang out. This 1-year-old house has more history under its roof than other homes have in a decade.

It began in Paraguay

Mel Fros, of Dutch-German descent, started his years in South America. He was an intelligent, curious and artistic child. He created things, made music and played in the jungle. He built huts from bamboo that grew nearby in the wild. He thrived. Then his family moved to the United States. He was just getting used to the English language when he lost his hearing.

A musical person in a silent world must still create beauty

Mel will tell you that he still hears beautiful music in his head.

“Although I hear international folk songs that were popular in the early 1960s,” he said with perfect speech.

Anyone person could strike up a conversation with Mel and never realize that he’s deaf. He writes poetry, creates watercolors with his son Daniel, referees soccer and jogs.

He met a girl and they began their journey

As a young and penniless college graduate from New York’s Rochester Institute of Technology, he made his way to Champaign-Urbana to renovate and repair homes for disadvantaged people. All the while he dreamed of his own business. While he renovated, he read carpentry books and he took classes at Parkland College. That’s where he met Janet, an interpreter for the deaf.

In just two years, they married. His business grew. Their family grew. Today, he and Janet are the proud parents of Urbana High School and University of Illinois graduates ­— Renata, a web designer, and Daniel, a builder like his dad, on his way to master status.

“The bungalow was a way for Daniel to get in the requirements for becoming a master builder,” Janet said of the homebuilding project that was a learning lesson as well.

The family wanted to put great thought into the bungalow and make it a wonderful home for a someday family. Details were of utmost importance. For example, Janet was very conscious of the accessibility issue.

“My dad had passed away. He couldn’t easily get in and out of his condo because it wasn’t accessible. We wanted clearance, adequate living space, wider doors, lever door handles and wider hallways. I wanted to make sure that the bungalow had that in place,” she said.

She said that even things like heat registers, laundry and mechanicals had to be accessible. This craftsman-style bungalow blends traditional design with contemporary features.

Daniel, an environmental sciences graduate, said they wanted energy efficiency to be a priority. He said they wanted to surpass the local codes in all aspects of the home, most of which the duo mastered themselves, rather than subcontracting out like a lot of builders do.

“We have very deep walls in the bungalow. We’re at 2 by 8 inches in depth. (The local) code is 2 by 6 inches. There is less wood in the walls and more insulation. The R-value is 31,” Daniel said.

Champaign County code for wood walls is R-20, according to the 2012 Illinois Energy Conservation Code.

R-value, or resistance-value, is the amount of thermal resistance that a building product maintains. The higher the r-value, the less energy it takes to keep a structure at a comfortable temperature. It can be applied to insulation, walls, windows and even window treatments like shades and curtains.

“We were inspired by the simple beauty of a craftsman-style home. We wanted to have quality craftsmanship, so we took our time to hand build it. We wanted to build something from the ground up; cabinets, laying patio block, door hanging. What I truly enjoyed was the framing aspect. The framing upstairs was challenging, because of the depth,” Daniel said.

He pointed out that the bungalow has a different layering technique than most homes that are built today.

“I did the renderings, the technical and load-bearing requirements,” he said. “I did my best to not just tell him but to show him how to do various things.”

Mel wakes up every day loving his work. And being able to teach his son the craft that he loved was a double blessing.

“I’ve never doubted who I was or what I wanted to do in life,” he said. “The five years of working with Daniel on various projects; the blog entries, the fine home building — if I die tomorrow, I’m happy to pass on to Daniel this gift,” Mel said from the cozy kitchen in his own Urbana home.

They were happy with the progress on the bungalow.

The Fros family then thought that upon completion, they would put the house on the market and sell it.

“I was doodling at Starbucks. It was 6 in the a.m. I met John there,” Mel said about John Elliott, a local minister who happened to looking for a house for his growing family.

Mel said that the bungalow seemed to be what they were looking for: the neighborhood, the size and the look of the home.

“But they wanted a basement,” he said. A craftsman-style bungalow usually has a half-above and half-under basement, if it has one at all.

In Central Illinois, basements are sometimes problematic because of the groundwater that is common in the area.

The Elliotts — John and Janell, with their kids Gracy, Macy, Maddux and Shai — wanted the extra footage a basement gives — a family. A lot of homes being built have finished basements.

Janet thought they should look up, instead of down. The two parties had to meet on common ground and that ground was the attic.

“Why not use the 900 square feet in the attic to give their extra footage? They would have windows with great lighting, no under-ground feeling and the footage they needed,” she said.

“I told John that I still think that I am building this home for their family,” Mel said.

John Elliott considered the space, Mel said. They met in agreement on the idea of an attic, and since a craftsman-style home has really high-pitched roofs, there would be no problem with head room. The entire home boasts 9-foot ceilings throughout.

So the bungalow began its evolution into the Elliotts’ home. The family even moved in before the home was completed. The trust that was mutually exchanged between these two families was nothing short of amazing.

“Well, we understood where they were,” Mel said.

The moms formed an alliance, too. Janet was the liaison and the diplomat of the process.

“Janelle and I worked well together,” Janet said.

Daniel said they worked long and hard to get the home ready for the eager family.

“We would take breaks, though, and little Grady, his dad, my dad and I would play bags,” Daniel said.

Grady would wait eagerly after that for the daily bags tradition the boys had started. The families broke bread together. They even had the wedding reception of their daughter, Renata and her new husband, Matt Mazur at the bungalow, where Mel and Janet also renewed their vows upstairs in what would later be John’s inspiration space.

“This home has a rich history already,” John Elliott said.

Discover the best of what Central Illinois has to offer. Sign up now and get 2 full years for only $18.95.
Click on the link: http://www.news-gazette.com/store/news-gazette-subscriptions/purchase-two-year-subscription-home-magazine.html

You decide you need a new home.