They wanted to get a couple of steaks, so they set-out from their rural Tuscola home to make their way to the Twin-Cities that Sunday in November.

Michael and Karen Brian will never forget that autumn day they went to celebrate his birthday in Champaign. They wanted to get a couple of steaks, so they set-out from their rural Tuscola home to make their way to the Twin-Cities that Sunday in November.

Michael’s birthday happens to be that same day that has gone down in weather infamy in Illinois: November 17, 2013. That day the Midwest had 73 tornados strike the region. Two in Illinois were ranked four on the Fujita scale (F4), and it was the costliest November ever in Illinois, so far as damage to life and property is concerned.

Outside of the Tuscola area, nobody seems to know about the Brian family and how they lost not only their home, but their farm and trucking company all in a few moments of wind turbulence that forever changed this tight-knit family.

“It was the same day that all those home were lost in Gifford, “ Karen Brian said. “So horrible.”

Karen said they had just purchased a new car, an Acadia, and thought they better turn around and go home when the weather started looking a little foreboding.

“I didn’t want it to get hail-damaged,” she said.

So, they turned around on Interstate-57.

“Our son-in-law, Sean Miller, called us and asked where we were. He was doing some work here at our house, in one of our out-buildings. We told him that we were close to the Monticello Road,” Michael said. Karen said her son-in-law hesitated, and he then told them to be careful.

Miller then decided he should maybe go to the house and get in the basement. The windows vibrated and he said the lights went out.

“I didn’t hear that train sound that people say they hear. It was the sound of a storm,” he said.

“He was screaming, “It’s all gone! It’s all gone! Everything is gone!” We didn’t really believe him. We had an all-brick house. How much damage could be done? We would find out,” Karen said.

Their son-in-law said he knew it was bad when he could see sunlight pouring into the basement from above.

“Yeah, when we pulled up, the sun was out,” Michael said.

Michael said it was all gone- the house, the farm and his trucking company. What took the Brians years to work so hard for: tilling the earth, hauling seed and raising three daughters- Carrie, Michele and Jessica-was all entirely gone in those eight minutes.

The devastation they suffered is still hard for the Brians to articulate into words. They lost their 2,800 square foot, all-brick home. A few cabinets remained, some boxes and things like that. Those from Illinois know how precarious a tornado can be, picking and choosing what to destroy in such a random way that it baffles many.

“There were boxes, seemingly unharmed with all the contents still in them-like a pair of shoes-but when they were opened, they were full of insulation, too,” Michael said.

The garage was completely lifted off of the house, plus, two out buildings, three grain bins, two Volkswagen Beetles, two vintage Corvettes-one Michael had just restored and had never gotten to show-off to his fellow car-club pals- a pick-up truck, a golf-cart, a Harley Davidson motorcycle, not to mention several John-Deere tractors, other farming implements and Michael’s semi-trucking business all destroyed.

Immediately, people from the area showed up.

“Both lanes were full of people. We had hundreds of them here to help,” Karen said, adding that at least 50 more people had to be turned away, because they couldn’t get in at the Brian Farm that day.

Part of the shed was still standing.

“People hauled everything over to the shed,” Michael said.

Karen called a good friend, who had a house to rent close-by.

“Lynnette Smith gave us an all-furnished place to stay. She made it here from Beardstown in two hours to help,” Karen said, tearing up, even after two years.

Ironically, her brother across the road had no damage.

“Gary and Becky didn’t even have a branch down on their yard,” she said.

They worked for days. People kept showing up. Some donated gift cards from afar. Others brought food out to the workers. Businesses in town gave merchandise and money to help the Brians. Farmers brought high-hoes to help clean-up the mass amount of wreckage. Even little kids sent cards from their classrooms, wishing them well and lifting up their spirits.

They spent November 24, their 40th wedding anniversary, cleaning up what was left of their livelihood and their home.

“You fuss and take care of your things, and then one day it’s all out in a field,” Michael said. “We didn’t find the golf cart for two days. It was flattened in another field.”

The Brians pointed to the east of their property to Interstate 74, a few miles away.

“As time went on, we cleaned the fields up to that point. Our things went clear out to the interstate,” Michael said.

Ironically, Karen said the car they had wanted to save from hail damage that day, had also been damaged.

A year later, to the very weekend, after insurance headaches, FEMA heartaches, and the hard work of building a new home, they were in their new home, and thankful to still be here, sharing their lives with their three daughters, their husbands and their six grandchildren.

The Brians stood next to each. They were smiling.

“Yes, it’s been hard, but we’re thankful. Thankful for what we have,” Karen said.

To see more stories and full-color photography, secure your subscription to At Home in Central Illinois by going to: http://www.news-gazette.com/store/news-gazette-subscriptions/purchase-two-year-subscription-home-magazine.html. Or call: 217-351-5252. 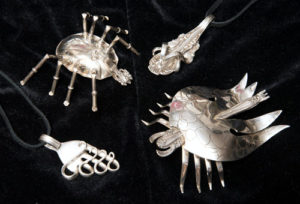