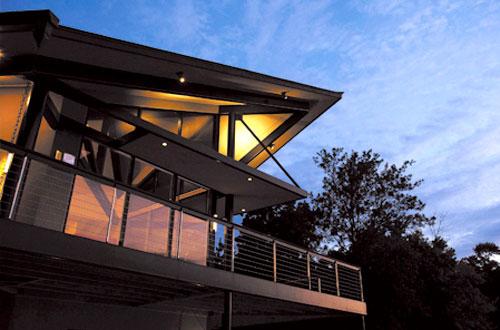 Homes: Relaxing by the Water

Relaxing by the Water

A unique boathouse with a cutting-edge design provides a relaxing retreat for enjoying Lake Vermilion.

Sandi and David Wood built their boathouse to have the perfect place to relax with their five children and three grandchildren during the summer.

They enjoy seeing the boats on Lake Vermilion and hearing the noise of activity on the water. In winter, they might spot an eagle soaring over the water or frost covering the trees on the far shore.

“I thought the lake would be beautiful in summer, but not so much in winter,” David Wood said. “But it’s probably more interesting in winter. We came down during a snowstorm or two last year. It’s a beautiful setting to watch the snow blowing across the ice.”

The modern, two-story structure was built using a steel beam exoskeleton, and has an engineered stucco exterior and large glass windows facing the water. The prow-shaped copper roof has been described as an overturned boat or a kite.

The boathouse is surrounded by a deck, with a spiral staircase down to the lower story and a concrete path along the lakefront.

Building the structure was no simple task.

Perhaps the most difficult aspect was moving equipment and materials down the steeply sloping lawn from the Wood’s Danville home to the shoreline. A neighbor granted them a construction easement across a portion of his property to access the location for the boathouse.

A huge amount of dirt was removed for the construction of the boathouse, and a thicket of trees along one lot line was removed as well.

Landscape architect Jon Gates of Danville built a low retaining wall above the boathouse, with landscaping along it. He used topsoil with a high sand content to improve drainage along the retaining wall. He used polypropylene fabric cover in the landscaped areas to prevent erosion. Gates also incorporated catch basins for rain water into the lawn.

Gates built a path from the house to the boathouse using paving blocks with openings planted with grass to reduce surface water runoff.

The Woods struggled at first with how the boathouse should look. They tried to come up with a design idea that would be similar to the house, to no avail. Then they decided to do something completely different, with the most important factor being the space should be easy to use and informal.

Architect Daniel Korlov of Bloomington, Ind., designed the steel and glass structure. The original design called for a sawtooth roof, but Sandi Wood didn’t like it so Korlov came up with the prow-shaped roof.

“Daniel wanted it to look like it was floating in space,” Sandi Wood said of his design for the boathouse. “There are places you can stand in the back and see all the way to the front. He wanted the feeling that you were standing on a boat.”

Sandi’s brother, Rick McCanse, is a custom homebuilder in Oregon, Ill. He was the general contractor on the project, working closely with Paul Offutt Construction of Danville.

The interior of the boathouse is 600 square feet. The upper level includes a kitchen, eating area, sitting area with a propane gas fireplace, and a bathroom with a heated tile floor and shower. Outside a screened porch faces the Wood’s home.

The deck surrounding the boathouse and the pier and its benches are made from ipê, an extremely dense and durable tropical wood that doesn’t warp. The wood was used for the flooring inside as well.

The boathouse is meant to be an indoor/outdoor space, and the tables and chairs inside are lightweight and can easily be moved outside onto the deck.

The ground floor of the boathouse has storage for the boats — two kayaks, a rowing shell and a canoe, in addition to a small sailboat, a jet ski and a ski boat kept on the water. A garage door made of translucent glass opens for moving boats in and out.

The lower level also includes a bathroom and an outdoor shower.

Gates, McCanse and welder Dale Beesing of Oregon, Ill., designed a 30-foot steel waterfall with a children’s wading area at the bottom that flows between the retaining wall and the boathouse.

Gates also designed a walkway with decorative concrete along the shoreline that extends to a neighbor’s property. McCanse designed the light fixtures along the walkway, as well as the pier. The concrete pad includes a sitting area around a firepit.

The construction, which started in the summer of 2009 and was finished in September 2010, attracted onlookers from the water. Boaters often stopped by to watch the progress of the building.

The Woods not only use the boathouse for themselves and their family, but also for gatherings and receptions for the employees at Watchfire Signs. David Wood was president and CEO of the company before retiring in 2009.

The Woods say the project allowed skilled craftsmen to work on a unique building. They hope it also increases the appreciation of Lake Vermilion.

The best of the best 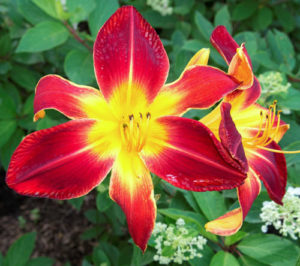 John and Judy Chesnut’s farm hums with life this time of year.