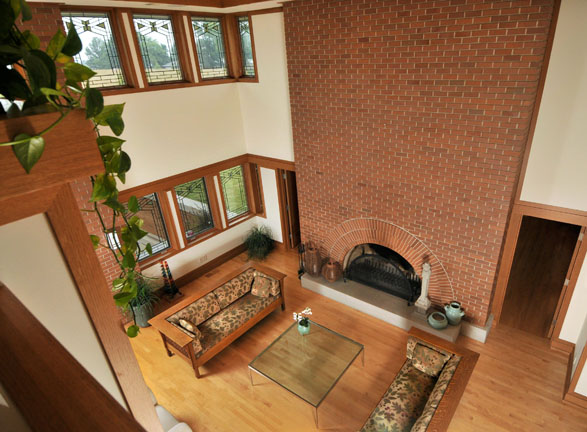 Homes: Prairie-style house on the prairie

Prairie-style house on the prairie

An Arthur home is inspired by Frank Lloyd Wright's designs.

Pat and Jim Jurgens had a unique opportunity, when they moved from the Chicago suburb of Riverside to the small central Illinois community of Arthur, to build a Prairie-style house that was actually on the prairie.

The couple moved to Arthur — Jim Jurgens’ hometown — in 1999, when Jim returned to become president of the State Bank of Arthur.

They wanted to build in Arthur and were considering possible sites for a new house when they met Chicago architect John Tilton on a house walk of Frank Lloyd Wright homes in the Oak Park area.

Tilton designs homes in a variety of architectural styles, but he has a strong affinity for Prairie-style homes. He lives in a Frank Lloyd Wright home himself, and he’s done restoration work for several Wright homes.

Tilton was eager for the opportunity to build a Prairie-style house in a rural setting.

“The vistas from their property looking out, especially to the west, are spectacular. It’s a wonderful view and setting, especially for a prairie house,” Tilton said. “It has this vista that unfolded to the horizon line, really. It had these Amish farmsteads out on the horizon. There was a windbreak of trees to the south, which was kind of a nice backdrop to placing the house.”

The Jurgenses bought 16 acres of farmland — part of 80 acres that Jim’s grandfather purchased in 1900 — from Jim’s cousins. The house sits on 4 acres, with 12 acres of farmland directly to the west.
Tilton suggested an L-shaped plan for the site. While the home was inspired by Wright’s designs, it is not a copy of another home.

“We knew our architect was an admirer of Frank Lloyd Wright, and we knew all the characteristics of his style,” Pat said. “But we didn’t want to duplicate a house. This incorporates characteristics in the house that work on this site.”

For example, the house was built 5 to 6 feet above grade to improve the view. The additional height of the house above grade makes for a spectacular view of the sunset across the fields.
The kitchen and master bathroom are larger than those typically found in a Wright home. Pat likes to cook, and the couple has four children and nine grandchildren.

“The kitchen is the place where people tend to gather,” Jim said. “We said, ‘We need a little bit more space in the kitchen,’ so we moved a wall.”

The Jurgenses had been in a number of Wright houses that were dark, and they wanted a lot of windows. Their home also has a skylight at the center of the house, over the staircase.
The windows feature art glass. Those around the home’s front door have an owl design inspired by the art glass in Tilton’s home.

Wright’s designs emphasized horizontal lines, and the design of the Jurgens home does the same. From inside, the overhang of the cantilevered roof draws the eye to the horizon. From outside, the band of windows around the home accentuates the horizontal.

The couple eliminated downspouts (a vertical element) on the front side of their home. For drainage, water flows down through holes in the corners of the roof into basins filled with gravel, and then into field tile.

Brick “wing” walls radiate out from the house, with limestone composite urns at the end modeled after the urns used at Wright’s Robie House in Chicago. The low-pitched hip roof features overhanging eaves sheltering the second-floor balconies.

“The cantilevers are really very dramatic on that house and kind of soar out into space. That adds to the drama,” Tilton said.

Many of the design elements on the outside of the home are repeated inside. For example, the deep baseboards inside echo the limestone foundation outside. The wood trim on the ceiling in the master bedroom and bathroom follows the same lines as the roof.

The bed’s headboard in the master bedroom has a horizontal banding design, matching the chairs in the room as well as the wood banding along the soffits of the home.
The doors and wood trim in the home are all quarter-sawn white oak, a wood that Wright used. The wood screen around the staircase is also white oak, and its pieces vary in width and in the angle at which they are placed, making the staircase look more open or more closed, depending on the angle at which you are looking at it.

Wright also used different ceiling heights to delineate an open room into separate spaces. In the Jurgens home, the ceiling is lower at the entry inside the front door and in the dining area, but the living room is open to the second story. As you walk into the living room, your attention is drawn to the wall of windows in front of you and the horizon beyond. It is one of Tilton’s favorite spaces in the house.

“The living room, with the loft and the stairway, is a very interesting composition and a very nice space,” Tilton said. “When you come in through the entry and the two-story space opens up, and the view, it’s pretty dramatic to take that all in.

“I really like the sunburst fireplace opening,” he added. “That’s a nice signature to the house also.”

Many of the furnishings replicate Wright’s designs as well. The dining room chairs are replicas of barrel chairs Wright designed for the Martin house in Buffalo, N.Y. The light fixture above the dining table is also a replica, from a company that does period reproductions.

The living room sofas and the chair in the loft reading area upstairs are Stickley designs.

The glass coffee table is decidedly not a choice Wright would have made, the Jurgenses said. It’s more in the style of Mies van de Rohe, Pat said — “an anathema” to Wright. “But we think it works.”

The couple used local craftsmen for much of the work on their home. Willard Helmuth of Arthur built the home, and Jake Chupp of Arthur was the construction manager. Bear Creek Truss built the roof and floor trusses.

“This is the second house I’ve built with Amish contractors. They are an absolute delight to work with,” Tilton said. “They are so resourceful and they really know their trades and know them well and execute the work very, very nicely.”

The Jurgenses plant part of their yard with alfalfa each year, and in the past they’ve had an Amish farmer cut and bale the alfalfa with his team of horses.

“Frank Lloyd Wright’s idea was to make the house part of the setting,” Pat said. “Since there is agriculture to the west of us, it incorporates that into the setting.”

Terry Harkness, a University of Illinois landscape architecture professor, created the Jurgenses’ landscape plan. It includes a sidewalk circling the property, giving the couple a place to walk in the evening, as their home is on a country road without sidewalks.

The property was big enough, Tilton said, that “we had the ability to do a rather grand, sweeping driveway” that circles back toward the house and winds around it, so visitors “really can take it all in as (they) are approaching the house.”

The landscape design also includes native prairie perennials, such as big bluestem, ironweed and coneflowers, and a crabapple orchard just south of the home.

Pat is a Master Gardener, and she plants sunflowers every year along the edge of the cornfield bordering the property. In the spring, the front yard blooms with redbud trees and 700 to 800 daffodils.

“I like Frank Lloyd Wright because he’s very modern. It has such an elegant, minimal feel,” Pat said.

“I think the choices work perfectly with this. There’s something spare and open and stripped down about it. There’s a lot of design, so you don’t have to bring in a lot of frou frou and decorate it. It stands on its own.” 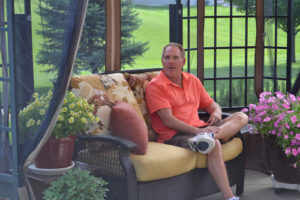 The yard extraordinaire. Phil Lovett takes the guesswork out of a perfect lawn. 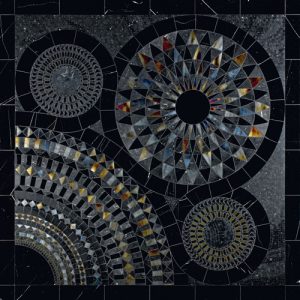 Artistry and artifice in new tiles