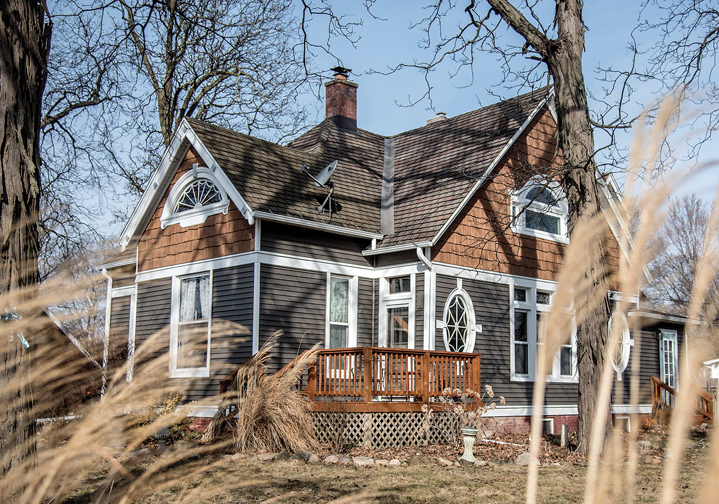 Tara and Jessica “Jessi” Hurless had just finished one of their renovation projects when we visited them in February for the spring edition of At Home in Central Illinois. They share a beautiful Victorian in Mahomet with their dogs, Chaco and Boss, and their cats, Harper, Charlie and Milo.

“We finished up the kitchen,” Tara said.

Tara’s dad gave them 12 boxes of stone tile, which was just enough to cover the kitchen floor.

“We lucked out. We had just three pieces left,” Jessi said.

They recently finished the cabinetry in the kitchen. One of the tips they used to get rid of rust on the hardware was to soak it overnight in a saltwater solution in a crockpot with the heat setting on low.

These are can-do women. They are former record-breaking athletes, Jessi in basketball and Tara in soccer. Tara attended Boylen High School in Rockford, where she still holds scoring records. She played at the University of Illinois and held records for many years there as well. Jessi is a Fisher Bunny who played basketball at Parkland College and then for Iowa Wesleyan University.

They recently finished a busy period in their lives. They married in October 2016. Before that, they had been Googling ideas, watching You Tube videos and picking the brains of carpenter-types to renovate the Victorian beauty that Tara had purchased in 2010.

Like the beauty they are restoring, they never want to just throw something away just because it’s old. Tara and Jessi live by the motto: Reuse, restore and recycle. Nothing goes to waste.

“Tara will find things by the road, by a dumpster or that is salvaged and she will turn it into something usable,” Jessi said from their kitchen island, which is made from throwaways.

“Yes, the wood is from an old barn. Look at the pulley that was on the barn door,” Tara said as she pointed to the fixture on the side of the island.

The barstools were rescued from the trash. They put wooden tops on them and painted the wrought iron.

The countertop is something else, too.

Concrete? As in the stuff that roads are made from?

“Yes, we put it into molds, let it set and this is the final product,” Tara said.

It’s lovely, too. And very durable.

Along with the kitchen, other renovations have been made, including the mud room that was a bedroom before they got hold of it. They will eventually make it into a first-floor master with a walkout deck to the yard that connects with a wraparound porch. These two go-getters make it seem like child’s play.

There is Tim Gadwa, who made a custom dining table and benches made from an old corn crib for their dining room.

“We found him on social media. The table weighs around 200 pounds. Tim is really young. He does great work. He is a self-taught furniture maker and very good at it,” Tara said. “We will use him again to make more furniture.”

They took down their old garage doors — which are wood — and used them as a “Mrs. & Mrs.” backdrop for their DIY wedding. Then they put a new ceiling in the garage, which they learned how to do on You Tube, and new doors on the garage.

Yes, they have done quite a bit themselves, but they want to be sure to give credit to so many who have helped them along the way.

“Our friends and family really pitched in and helped us with our home, too. We are eternally grateful to them all,” Jessi said.

The new siding was put on by S & K Exteriors right before the wedding.

“They left on the old wooden siding and covered it with quarter- inch foam board. Then they put the new vinyl siding on top. It makes for great insulation,” Tara said.

The home has quite a notable history, too. It’s the Byron D. Abbot home that was built in 1895 in a grove of hickory trees near the village of Mahomet. Abbott was the son of early Mahomet developer Stephen Abbott. The hickory grove was eventually split into 18 lots, and Mahomet grew, but the home still carries that same spirit of country beauty, coupled with Victorian refinement.

In all these years since 1895, the home has only had a few true owners: the Abbotts, the Pittmans, the Herriott family — along with their own family, the Plotners — then the Haines family and finally the Hurless family of Tara and Jessi.

It has a total of 2,280 square feet. It’s obvious that the original owners had get-togethers in mind when planning the home. The really impressive part is the details.

“I lived here for four months, and every day I still saw something new and unique to look at,” Jessi said when showing us the pocket doors that have the original hardware — and keys — intact.

The pocket doors have one type of wood on one side that is more expensive and faces the dining area where people would be socializing, while the other side is made from more basic, less expensive wood. This strategy kept the cost down and helped saved money. The doors slide open easily with a flick of the wrist, with no drag or traction from years of wear.

“These transoms are still functional” Tara said, as she opened one above the front-door foyer.

There are transoms above the outer windows, too. Most of them are stained glass and cannot be opened. In fact, there is stained glass all over the Hurless home.

“Yes, Glass FX took them out, sealed the openings and put glass over the stained glass to protect it,” Jessi said.

One room upstairs had to be completely renovated. The couple left the integrity of the room’s shape intact.

“We did have to build our bed here in the room; otherwise we would not have been able to get it up here,” Jessi said.

After Tara asked Jessi to marry her, it was all about the wedding plans, even though they were still working on the house, too.

Jessi said Tara has a flair. It was no different with the engagement.

Tara is a University of Illinois police officer. She has duty at Willard Airport quite often. She took Jessi up for a small airplane ride, when Jessi had time off from her job at TSI. Jessi had no idea what Tara was up to.

“While we were in the plane, I had her listening to music. The song ‘I Lived’ by One Republic was playing,” Tara said. “The line, ‘Look over your shoulder’ played and when she looked over her shoulder, she saw it: ‘Will you marry me?’ It was beautiful.”

A year and a half later, they tied the knot. It was an impressive DIY wedding, with details like bouquets that consisted of dried hydrangeas they cut from neighbors’ shrubs.

After they returned from their honeymoon, they had no projects.

Jessi smiled, because she knows that in a heartbeat, Tara can have the bathroom torn down to the subfloor, or could have picked up some materials she saved from the side of the road.

“All I wanted for Christmas was to not have any projects to do,” Jessi said.

“All I wanted was some grout,” Tara laughed. 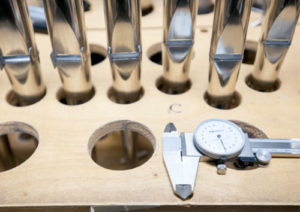 What is a church organ? How are they made?