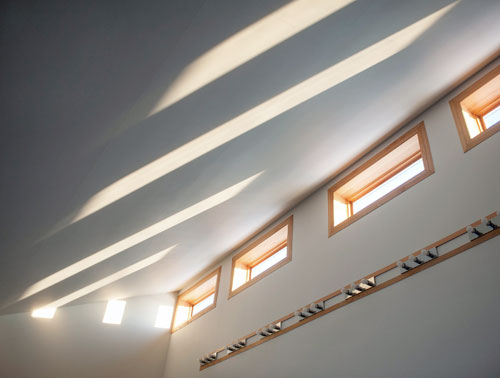 Ty Newell has a wealth of data about his home.

He monitors temperature and humidity levels and the air quality – levels of carbon dioxide and volatile organic compounds (VOCs) and radon. He knows how much energy is produced by the solar collectors in the backyard, and how much energy his home and each appliance uses. He measures how much rainwater is collected, how much water is used, and the light levels in his home.
His solar-powered home in northeast Urbana is called Equinox House. Among the green technologies used for the home are some developed by Newell Instruments, an engineering company run by Newell and his son Ben that works with sensors for the refrigeration and air-conditioning industries, as well as activities involving energy conversion, heat transfer, solar energy and other building technologies.

“As much as anything, this has been a test bed for technologies Ben and I have been developing in our company,” Newell said of Equinox House.

It has always been a goal for Newell and his wife Deb to live in a solar-powered house.

“We’ve always wanted to be good stewards of the Earth,” Deb Newell said. “This is an important part of it.”

The Newells began building their home in the fall of 2009 and moved into it in November 2010. The home is 2,100 square feet, although it feels bigger thanks to the height of its ceilings – 20 feet at their tallest in the living/dining/kitchen area. There are four bedrooms and two and a half bathrooms.

At the edge of the backyard, 600 to 700 square feet of solar collectors face south, gathering the energy needed to power the house as well as the Newells’ Ford Focus electric car. The house is connected to the electric grid, but it is a net-zero-energy home. The solar panels produce about 12,000-kilowatt hours per year. Since the Newells built the house, the solar panels have produced about 48,000 kilowatt-hours of energy. They’ve used about 12,000 kilowatt-hours directly, put another 36,000 into the grid and have drawn about 26,500 from the grid – donating nearly 10,000 kilowatt-hours.

The home draws off the electric grid in winter – roughly from around Thanksgiving (although it was late October last year) to late February or March – and then begins producing more solar energy to power it, ending up with a net positive in energy production.

But even so, their goal was not centered on saving energy. Rather, Newell said, he was concerned with living in a sustainable, comfortable and healthful manner. “Energy was far down the list,” he said.

Newell uses the CERV (Conditioning Energy Recovery Ventilator) system – developed by Newell Instruments – to monitor his home’s air quality. The system monitors levels of carbon dioxide and volatile organic compounds – pollutants emitted as gases from products such as paint, cleaning supplies, office supplies, building materials and furnishings. If those pollutants rise to a certain level, the system brings fresh air into the home. It also exhausts areas, such as bathrooms and the laundry, where moisture and odors linger.

The system also monitors temperature and humidity. It senses when the outside air is better quality than the inside air and it brings in fresh air then.

“The CERV unit is like opening a window automatically,” Newell said.

The house is named after the “equinox overhang” that shelters the clerestory windows – the band of windows high above the living area and master bedroom, near the ceiling – from the summer sun and acts as a solar reflector in the winter. The overhang prevents glare and overheating in the home’s interior, while providing enough natural light to read without any indoor lights on.
Architect Jean Ascoli, from the Smart Energy Design Assistance Center at the University of Illinois, designed an integrated roofline for the home based on what she had seen while working with Taliesin Associated Architects, a firm founded by Frank Lloyd Wright.

Ascoli said the clerestory windows and overhang should be functional elements of the house and “not appear to be stuck on the structure, but really integrate into the design.”
The Newells like modern architecture and are fans of Wright’s designs.

“The look of this house has nothing to do with how it functions,” Newell said, adding he and Deb think of the design as modern Usonian, a term used by Wright to describe homes he designed that were relatively small, constructed with natural materials, with passive systems for heating and cooling, and natural lighting from clerestory windows. Newell said the home is also characterized by a large public space, small private areas and a connection to the outdoors.

The pattern of the sun shining through the clerestory windows across the walls and floor of the home changes with the time of day as well as the seasons, as the sun is lower or higher in the sky.
“I knew how I wanted light to come in. Jean gave us this look and came up with the concept of how the clerestories and the roof would come together,” Newell said.

Deb Newell said she is “thrilled” with the natural lighting in the house. “I never noticed the equinox before, or how the light comes in, but we can see it,” she said.
She is also surprised and pleased that the home feels warm and cozy, even with high ceilings and concrete floors.

The home’s floors are untreated concrete, and they are also a source of experimentation and data for Newell. He studies how moisture is absorbed or released by the concrete and how the humidity in the house is affected. He also likes the pattern in the floors, created when they were poured on a snowy, sleety day.

The kitchen cabinets and island are made by Italian company Valcucine. The Newells saw a display of the kitchen cabinets by a kitchen architect in Tulsa, Okla., while visiting their daughter there. They liked the modern look. Deb Newell designed the pattern of the backsplash, featuring black, silver and red tiles.

The cabinets are made of an aluminum frame with low-VOC particle board for the door fronts. The home has energy-efficient appliances, including the clothes dryer, which runs off a heat pump and is 50 percent more efficient than a conventional dryer, Newell said.

The home’s walls are made of 1-foot-thick structural insulated panels, with polystyrene foam sandwiched between two panels. It has Pella triple-pane windows.

Ty and Ben Newell were the general contractors for the home, and one of their rules was no holes would be cut in outside walls unless absolutely necessary. They made sure the workers putting in electrical wiring, ductwork and plumbing had an easy pathway to do so by creating a corridor in the ceiling. The home has only three holes in its shell, for fresh air intake, stale air exhaust and a plumbing fixture vent. Newell noted that most homes have leaks allowing air to come in around windows and in holes cut in the frame for wiring or vents, and that also allows allergens, dirt and mold inside.

Equinox House is also supersealed at its seams and joints. Having a well-insulated home with few air leaks has a downside, though.

“As we’re sealing up our homes more and more, we’re paying for it with our health,” said Newell, noting the air quality suffers without fresh air coming in, and increased carbon dioxide levels lead to decreased cognition and productivity. The CERV system counteracts that. Part of the work of Newell Instruments is indoor air quality studies in commercial and office spaces, which must comply with fresh air standards.

The Newells harvest rainwater off their roof. It flows into a 1,700-gallon tank under a cistern cover in their backyard. They are approved to use the rainwater in their home’s toilets now. That use accounts for about 10,000 gallons per year, or half their water consumption. They are hoping to eventually get approval to use the water for their shower and laundry as well.
They can collect about 40,000 gallons per year. The tank is never more than half empty, Newell said. Any overflow would go into their rain garden, which could hold another 3,000 gallons, minimizing the amount of water flowing into storm sewers.

Newell said he and Deb built their home within city limits intentionally, because they wanted to be subject to city codes, inspections and requisite approvals. They wanted their home to be something others could replicate.

They also built the home to be one they would live in for the long term. For example, the single-story home has 3-foot-wide doorways and a barrier-free interior. The shower in the master bathroom has no surround or door, just a slight slope to the floor to keep water from running into the rest of the bathroom.

“We put a lot of effort into making this a very simple house that we can grow old in,” Newell said.

“There’s a lot of engineering and technology behind its design, but it’s the simplest house in the world to live in.” 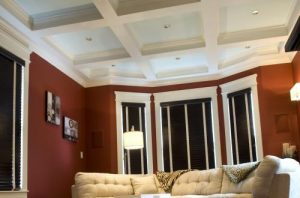 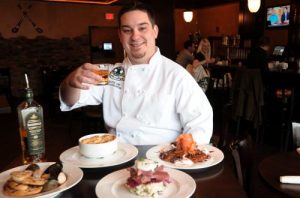