When University of Illinois’ Scott Denmark came to the area, he lived in a familiar place.

“I started out in what is referred to as the faculty ghetto,” he said.

It’s not really a ghetto. It’s a quaint and very historic part of Urbana near UI.

“But then this home became available,” he said, referring to his home.

Denmark’s house was built in 1984, and he bought it in 1992. It is a grey cedar-sided Midcentury Modern-style home.

“I like the cedar, the windows, the open spaces and the quality build,” Denmark said.

MCM homes are simply designed: they have basic shed roofs -meaning the shedding of water, not like a garden shed- that help keep the ample daylight aspect of MCM homes on the high-side, but also offer privacy for the inhabitants with expansive walls. The low side of the MCM roof maintains privacy by its horizontal proportions. The low side usually has large floor-to-ceiling walls of windows and will usually open up to a secluded yard or courtyard. This is the case with Denmark’s home.

MCM homes have private entryways, and usually do not have porches. When entering Denmark’s home, immediately there is a feeling of expansiveness and openness. As he navigated to the common area, the interiors opened to views of the backyard landscaping, which again gave the impression of openness, but yet, quite a bit of privacy.

His bedroom gives great connection to the outside with the adjacent three-season room, which itself had delightful wind chimes made by “Music of the Spheres,” and a view of the water-fall, flowering and evergreen trees, deck and yard, but yet has a secluded vibe, too. The trickling water sound is something that Denmark enjoys. He also has a lovely water feature in the foyer that has that same relaxing sound.

Denmark’s walls are expansive and simply decorated with examples of fine art, which he grew to appreciate by the teachings and instruction of his mother, Selma Denmark, who was a working artist, wife and mother of three. He also has great examples of her own art around the home; one being a lovely tapestry in the Cubism spirit of Picasso that was actually celebrated by the Long Island Portrait Group in 2007. He also has fine original pieces and recreations of paintings, as well.

“This is “The Gift of Many Coins,” and here is the book pertaining to this piece. I like to have the book near the painting. This painting depicts to me that she is conflicted,” he said as he pointed to the woman, a cage and the bird in the painting, suggesting a reference to the bird in a gilded cage analogy.

Denmark grew-up in Lynbrook on Long Island, New York, with his parents and older sister and brother.

“My parents had the dream that their children be college educated,” Denmark said.

So, Denmark went to college.

He is the Reynold C. Fuson Professor of Chemistry at the University of Illinois, which means he has a full professorship and is held in the highest regard as far as contributions to chemistry is concerned at the UI. He has degrees from MIT and ETH-Zurich, culminating in a Doctorate of Science Technology. He has written, to date, 366 articles, 27 book chapters and 29 complete books. He holds 4 U.S. Patents.

And he always knew that he would be a chemist, in some way, shape or form.

“I’m a child of the Sputnik generation,” he said.

He said that his parents encouraged learning in all forms, so they bought him a Gilbert chemistry set. It was a defining moment in his life.

“I was 10-years-old. Every Saturday I would get on the bus and go to the Central Science store to get supplies. Here I am riding the bus with silver nitrate-among other supplies-and it amazes me. Can you imagine that happening today? My basement lab grew and grew,” he said.

He soon became very aware that his experiments could produce noxious fumes, he didn’t want to hurt anyone, so he came up with a solution: a vacuum exhaust system.

“I suspended my mom’s Electrolux-the canister type-from the ceiling with a system of pulleys. It worked well, too,” he chuckled at the memory.

However, as great as an Electrolux can be, they are not meant for intense chemical fumes and eventually the vacuum was destroyed. He said his mom was upset, but it amazed him how his parents nurtured my growth.

“I’ve been in this for 37 years. I have a research group that I work with. I really enjoy it,” he said as he showed our staff his walk-in master bedroom closet.

It was filled with tailored suits and even had an automatic tie rack.

He also enjoys fountain pens and has quite a collection.

“Yes, let’s talk about publishing. When I edit the (PhD) candidates work, I have an arsenal of red pens and I bloody up their manuscript. Don’t they use sentence diagrams in school anymore,” he asked.

Another passion is his love of racing.

“I’m a pure amateur,” he told us, however, he modified a 1987 Porsche 951 with Rick Karich, who is a local mechanic, who is also Denmark’s mechanic and crew chief.

“I have a towing company that tows my car to the racetrack. I just show-up and race. It saves quite a bit of time, which is important because I have a full-time job. I obtained a racing license that enables me to race in Porsche racetracks and other sanctioned bodies,” he said.

He also races motorcycles, he said. His auxiliary garage had three sports bikes, and he owns more that are stored in San Diego, where he races and rides with his good friend Marlon Carlos. He has some very powerful racing bikes: a 2002 Kawasaki ZX-12R, a 2007 Suzuki GSX-R1000, a 2009 Yamaha YFZ-R1, and a 2012 BMW S100 RR. One might not see that there is a link between studying chemistry and racing, however, the adrenaline rush that is part of racing at g-force speeds, is somewhat similar to a scientific breakthrough. The former is more immediate, and the latter is tantamount for Denmark.

“When we discover something about a scientific insight, a thing that becomes part of the edifice of the universe, and where we lay a brick into that proverbial wall of science, it’s very moving,” he said.

He also owns a beautiful red 2015 Chevrolet Corvette that was resting in the garage when we arrived.

“She has a 7-speed manual transmission,” he said.

“I had to decide if it was a girl or a guy. She has curves like a woman, but she growls like a man. So, I named her Lola, after the song by the Kinks,” he said.

Denmark said that Donica Flint Blager of Custom Design and Interiors suggested he name his car. Blager is a certified interior designer, and she designed his renovations.

“I like Donica. She was great to work with. I told her I had absolutely no interest in going through catalogs. I just wanted her to put a design together. I trusted her,” he said.

“I’m really happy with both renovations,” he said.

It makes sense that he is an avid chef, too. Cooking is, after all, chemistry. 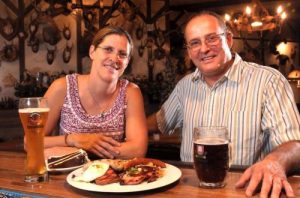