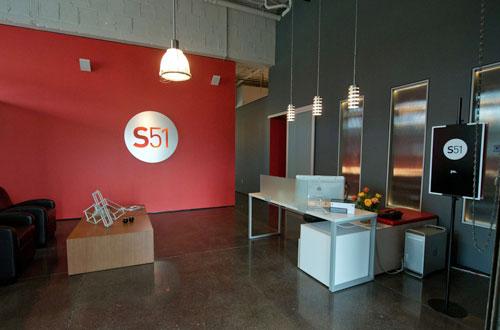 And the new office space for Surface 51, his marketing, design and public relations firm, does that. The business moved from a location on South Neil Street to Blue Line Station at 804 N. Neil St., Champaign.

“It was apparent really quickly. I saw it happen and could sense it,” Fleener said of his employees responding to a more open environment. “We were in here a week and I said, ‘This is just right.’”
When Fleener first saw the space, it was just a giant, empty warehouse. But, he said, “You could just see that you could put some cool office space in.”

Fleener put a lot of planning into how the space would be finished, and he did much of the design work himself. He and building owner Jeff Mellander talked frequently about how the space would look. Fleener said both are quite particular about what they like, and they found they agreed on the look for the space.

Mellander was delighted when Fleener told him he wasn’t interested in installing a drop ceiling or painting the exposed brick walls.

“The further our dialogue went, the more excited I got about his interest in the space,” Mellander said. “It’s just been a great fit.”

As with the building’s apartments, the Surface 51 space has polished concrete floors. Fleener chose to scrape some loose paint off the brick walls but leave the rest, giving the walls a distressed look. The paint that was left includes a band of blue that runs throughout the building, giving Blue Line Station its name.

The ceilings are painted light gray. Along with the windows lining the north side of the building, they give the space an airy feel.

“I love this natural look of everything,” Fleener said.

Fleener paid particular attention to the ductwork and utility lines running through the space. Clean lines are important, he said, and he wanted everything lined up and flowing, like a living thing pulling itself through the studio.

Air King worked on the heating and air conditioning systems. Fleener said he explained that he wanted things a certain way and the workers took on his vision for the space.

Fabricated metal beams contain electrical wiring so there aren’t wires running along the floor. Fleener used shades of red, black and gray, colors the company used in its former location.

The work spaces are separated by cubes and screens that allow light to pass through and the employees to be a part of everything going on in the office, but also allow them a sense of their own space.

The office has pendant lamps designed by David Spears, an artist and co-owner of Radio Maria. Lights designed by Spears also hang in the building’s stairwells and in the upper-floor apartments.
“Having (Surface 51) there is like a dream come true for me,” Mellander said. “It’s a creative environment. (Fleener) chose to maximize the structural architecture and existing elements. It’s this beautiful, pure, clean addition of really interesting architectural elements and design that make the finished space very complementary to the shell that was there.” 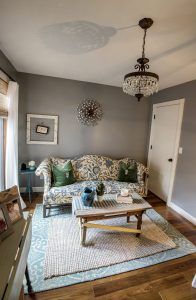 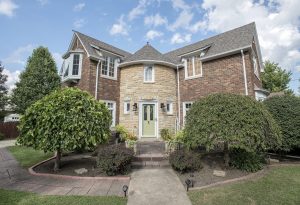