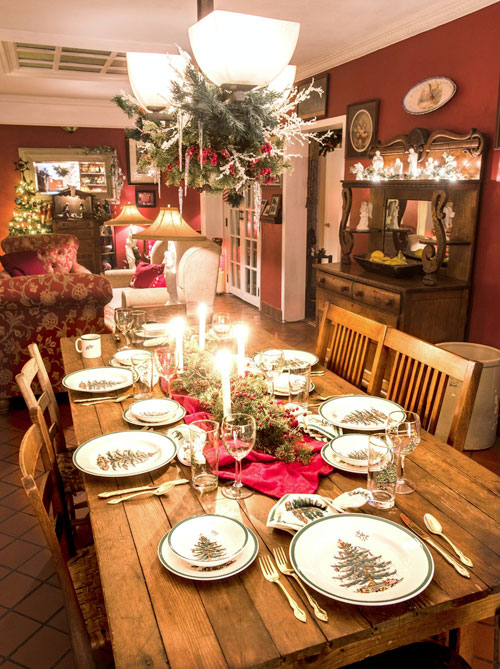 Bruce Rainey and Michael Hogue like to celebrate the holidays in a big way. The Champaign couple pulls out all of the stops for the holidays.

If Rainey and Hogue sound familiar to At Home in Central Illinois readers that’s because they were the first to lead the way to the county clerk’s office that first day of civil union registration in Urbana, June 1, 2011. Plus, everyone seems to know them in and around the Champaign-Urbana area. They throw a huge holiday party every year, and it’s a show-stopper.

“They’re so many people here that if one person turns right, then everybody else at the party has to turn right,” Rainey said with a laugh.

Rainey has a great big laugh that goes with his tall stature. He’s a manager at Meijier in Champaign. Hogue is a real estate broker at Re/Max Realty Associates in Champaign. The two are always out and about in the community and have a zest for life.

They met while in the dinner theater circuit in 1982, and became acquainted with each other, but had other partners at the time. Eventually, fate led the way, and they ended up together. That was around 26 years ago and they are still going strong.

Their home is beautifully perfect in the way it’s put together, but yet, it is very inviting and comfortable. Lovely but not pretentious. And when At Home in Central Illinois visited the limestone ranch it was decorated to the hilt for Christmas! At every turn there was a delight for the eye that cheered the heart.

This home is a mix of traditional, eclectic, country- chic, country, art deco, modern and the renaissance. And guess what? It all works beautifully. The architecture even has some wonderful mixed media, too. Concrete block and brick exist with beautiful wooden built-in cabinets and chandeliers throughout the structure.

“You can put anything together that you like,” Hogue said.

The couple has an eye for design and beauty, and it runs in the family. Rainey’s grandfather was Charles Dean Hyten, who founded the Eagle Pottery Company in Benton Arkansas. His company produced Niloak pottery, known for its “mission swirl” and considered some of the most collectible pottery in the world. The name was derived from spelling the name of the clay that is used for the art- kaolin-backwards. Hyten’s home is even listed on the National Register of Historic Places.

“He was considered that best potter in the world,” Rainey said.

Rainey and Hogue used to take walks around the neighborhood where their limestone ranch home sits beautifully among trees and a lovely yard before it was theirs and they would always stop and consider it.

It’s hard to believe that this wonderful home was actual almost in ruin in 2007.

They would walk by and Hogue said they knew they could save it. They had a vision about what the limestone ranch could be with a little TLC. The house became theirs on November 24, 2007.
“We closed on the day after Thanksgiving,” Rainey said. “It was so bad we couldn’t even see the ceiling,” Hogue said. They filled three dumpsters in one day. “We had the largest dumpsters they had,” Rainey said. In total they used eight dumpsters before all was said and done. Rainey and Hogue speak animatedly about the restoration. They had quite an adventure getting the ranch into its current state of beauty.

He referred to the addition of drywall that blends undetected to the plaster that existed when the home was first built. The home made its way out of ruin because it had “good bones.”
“Italian stone masons did the limestone,” Rainey said about the brick and the quality of it.

As for the interior, the refurbished home has fun elements like the den that is the Disney Room, or the dining table that once sat in a Sunday school.

“The kids carved their names in the wood,” Rainey said. “We didn’t want to take that away from its character.”
“So now we have our friends carve their names in our table when they visit,” Hogue said.

Hogue and Rainey are blessed and they know it.

“I love this house,” Hogue said.

Discover the best of what Central Illinois has to offer. Sign up now and get 2 full years for only $18.95. 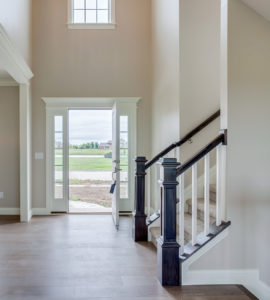 Move in and enjoy

The Radden family gave up a collective “Wow!” as they crossed the threshold of their new home in west Champaign.