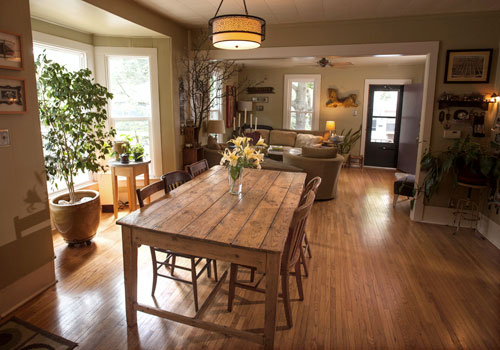 The small Urbana house was old and not in great shape. But Laura Huth liked what she saw – south-facing bay windows that would allow plenty of light into the home and a nice-sized kitchen.
“I knew sun could come pouring into the house if I tore walls out and created this warm, inviting space,” Huth said.

She bought the house about four years ago, moved in and began a “radical transformation.” The home went from one with small, dark rooms to a place with a light, open interior and a blend of old wood floors and modern finishes.

Huth believes the original part of the home is more than 100 years old and it was added onto over the years. It has 1,000 square feet, not counting the unfinished basement, and it has two bedrooms and one bathroom.

The main rooms were closed off from one another, with walls between the living room, the dining room and the kitchen. The living room walls were painted a maroon color, which made the space seem even smaller and darker.

“It was so tiny and dark in that front room,” Huth said.

The ceilings between the living and dining rooms were not the same height, so a beam was added for structural support where the wall once was. It also disguises the difference between the ceiling heights.

Huth did much of the work on the house with help from friends, including the demolition and painting. Tim Gibbs of Urbana was her contractor.

When Huth tore out the carpeting in the front bedroom, which serves as her office, she found the original pine floors underneath. Other areas of the house have oak floors. Huth took up vinyl parquet that covered the wood floors (which had been painted) in the dining room and had all the original floors refinished. She has also replaced all the home’s windows.

When Huth bought the house, the kitchen had been remodeled, with new cabinets along one wall. Huth kept those, moved the refrigerator and stove, and had custom cabinets made for the opposite side of the kitchen, along with the breakfast bar.

“The cabinets I inherited were really nice. I really wanted to have cabinets that were really functional for my cooking needs,” Huth said, adding she “makes a big production” out of cooking.
She didn’t try to match the new cabinets with the existing ones, but rather chose coordinating colors. Likewise, she didn’t match the existing laminate countertops. Instead, she used butcher block for the countertop to one side of the stove where she can do food prep work. Doug Kistler of Uptown Custom Concrete in Urbana put in concrete countertops for the raised breakfast bar and another counter that tops cabinets at a right angle to the stove. The countertops are a brick red/orange color.

“I just love these,” Huth said. “They’re so funky and so beautiful. Even though they are a dark color, they reflect light and make everything lighter.

“It’s a rich and gorgeous color. I think it does a really good job of being a focal point,” she added.

Huth put most of her money into the kitchen, for the new stove, the concrete countertops and the cabinets. The cabinets were designed to maximize use of the space she had and to make it easy to access the items stored in them. For example, the cabinet at a right angle to the stove has doors on the outside, away from the main kitchen area, so guests can reach in from outside the kitchen and get a wine glass.

Huth also transformed her “really lame” backyard. There was a small deck, a shed in the middle of the backyard, and some gravel and concrete blocks that formed a fire pit. She replaced the deck with a screened porch on the back of the house, and she added a recycled plastic deck in the backyard. The porch was carefully planned so it would provide enough space to fit a table Huth inherited from her grandfather and a seating area, but it would not require cutting down a Japanese honeysuckle in the backyard. The new deck has a seating area and firepit.
The shed was moved from the backyard to the end of the driveway, and Huth covered it with a false front made from lumber from the deck that was removed. She also used the lumber for a boardwalk in the backyard.

Another walkway is made from concrete samples Huth got from Kistler. Wine bottles buried upside down in the ground serve as edging and break up the rectangular shapes in the yard.
Huth also recycled the lumber from the deck that she removed to make a vertical garden on the south side of the house. She built the structure on the driveway, then put it up by attaching it to lath strips attached to the side of the house. She attached locker boxes she bought at a consignment store, a metal trough from a sawhorse and cedar boxes for plantings. She filled shelves with objects she found at the Preservation and Conservation Association or garage sales.

“It was so fun to put together,” Huth said.

She planted hostas along the north side of the yard and planted the existing raised beds with plants she got from friends’ yards or purchased. She added a weeping cherry tree to the backyard and a bamboo fence along the back.

After Huth finished the work on her home, she had friends and neighbors asking for her help in their home remodeling projects. She created a new business, called reCREATE, to do so.
“If there’s a way to bring this sort of enjoyment and beauty for other people’s living spaces or working spaces, I’m game for doing that,” she said.

She’s worked with other homeowners on color choices for a deck, on creating an eat-in space in a small kitchen and on helping with color and layout decisions.

And she’s enjoying what she created in her own home.

“I’m glad I could make this into a place where people want to be,” Huth said. “I want to show people they can take an older home in not great condition and make it into something nice.” 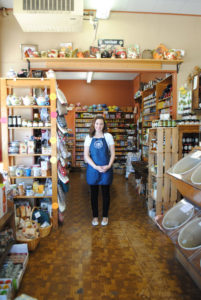 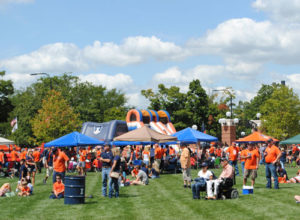