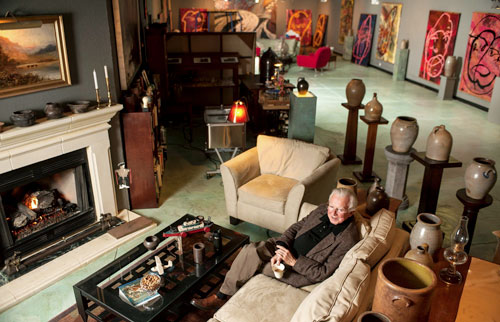 Homes: Art on the prairie

Art on the prairie

Artist Jerry Savage built his rural Sidney home to display his collection of artwork, including his own.

When he was planning for the home he would build, Jerry Savage wanted the best concepts of “universal space” – a place that serves multiple purposes.

His rural Sidney home offers just that. It is part-home, part-art gallery and part-artist’s studio. Savage wanted to be able to paint any time he wanted and to feel he and his surroundings were a part of his work.

From the outside, the home could be a garage or shed, with its metal siding and lack of windows along the front. Inside, the large, open space filled with art feels like a gallery.

Savage built the 10,000-square-foot home about 10 years ago, and he designed his house to have plenty of space to display artwork, both his own paintings and the art he collects.

The huge L-shaped living area includes pedestals holding Savage’s collection of 19th-century utilitarian pottery. They were made to be useful, rather than ornamental, and that’s what Savage likes best about them.

“You can sense the uniqueness of each craftsman,” he said, noting the imperfections in each piece, including fingerprints visible in the glaze of his most recent purchase.

He collects primitive pieces, including folk art, furniture and the pottery.

“I thought the form had a very beautiful aesthetic,” he said of the pottery. “I like things made by modest people, using materials they had. I like to see it age gracefully.”

The long walls of the open living area have no windows. Instead, they are lined with large canvases. Many are Savage’s, but he also displays the work of other artists he collects, including local artist Steve Hudson.

The front area of the home has no windows – partly to make room for the display of the artwork on the walls, but also to keep the light from affecting the color of the paintings and to keep heat from escaping. Skylights provide natural light for the room.

Editor’s note: See the “artists” section on this website for a story on Jerry Savage’s artwork.

Savage chose to position the home’s windows on the back of the house, looking southwest toward a neighboring farm and pasture where horses graze, and capturing the winter sunlight, when the sun is low in the sky.

The corner of the “L” features a cozy sitting area in front of a fireplace, with a nearby bar ready to serve a cocktail to guests. At the far end of the room, in front of one of Savage’s paintings inspired by the Cabrini-Green housing project in Chicago, are a trampoline, a puppet theater and toys – a play area for his 3-year-old granddaughter Ellie.

The dining room has a long, Shaker-style table and chairs where the extended family has Thanksgiving. His home has a mix of antique and contemporary furniture.

The kitchen features a restaurant stove Savage got from a church, a stainless-steel counter from a restaurant and an antique-white wood cabinet that takes up one entire wall. The cabinet had been used in a school and its white paint was flaking off when Savage bought it at a Tolono antique shop. He added a cobalt blue wash and wax, and it is the central piece of furniture in his kitchen.

The home includes a small studio where Savage does drawing and watercolor paintings, testing ideas for his large-scale paintings. He paints those in a large studio at the back of the house.
Savage said the one-story home was influenced by the flatness and functionality of the surrounding farms and their architecture. He wanted the home to be functional and energy-efficient. He also wanted relatively inexpensive and easily available building materials.

“I wanted materials I could get at Lowe’s,” he said.

The north and west walls are made from reinforced concrete block and the interior walls are tongue-in-groove construction board, sprayed with texturized paint. Savage likes the texture, and he needed walls that would hold his large canvases.

The home has high ceilings, and Savage has ceiling fans he uses only in winter, to push the warm air down.

The floor is concrete. Savage originally wanted it just polished, but it was not flat after it was installed and had to be ground down to be made flat. He then had it painted a seafoam green that he loves.

The exterior is a maintenance-free combination of galvanized metal and aluminum that does not need painting. Savage had the metal installed so the lines of it run horizontally, vertically and diagonally in what he calls a “choreographed rhythm.” The same metal is used on the roof, where the sun heats it and melts any snow so it doesn’t accumulate.

Outside, Savage had a 4-foot-high, 200-foot-long berm built that acts as a snow fence and keeps his driveway free of snowdrifts. He planted native plants in back, and he’s allowed some areas to grow up to create a maze of walking paths in the grass.

Editor’s note: See a related story on Jerry Savage’s artwork in the “artists” section of this website.

Central Illinois is known for its ever-changing weather. 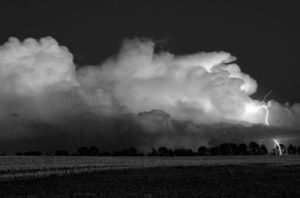