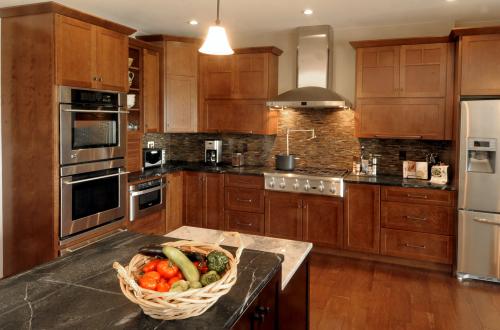 Homes: A labor of love

A labor of love

A Bloomington couple builds their dream house, with help from friends

When Laurel and Larry Schumacher set out to build their dream house, they didn’t just talk with an architect or contractor about what they wanted, then turn the project over to professional builders.

They actually built the house – from sketching out its design to serving as their own general contractors to calling in friends and family members to help with construction.
It wasn’t that big of a stretch. Larry had previously built 10 houses with his father, Larry Schumacher Sr., his brother Dean and a group of friends. None are professional builders, but they’ve learned a lot from experience.

While the Schumachers used subcontractors for work such as excavation and framing, “we had our hands in everything,” Laurel said.

“This is one of those we-get-by-with-a-little-help-from-our-friends kinds of projects,” she said.

The couple wanted to build a house together – their dream house, one they would live in for a long time. They were inspired by Laurel’s great-aunt and great-uncle’s Prairie-style house in Colorado Springs. It was built by Elizabeth Wright Ingraham, Frank Lloyd Wright’s granddaughter, and her husband, who had worked with Wright at Taliesen.

“I always loved that house,” Laurel said. “One of the things I loved about it was it was so connected inside and outside. It really felt like living outside.”

The Schumachers hoped to replicate its simple, clean design with a lot of windows.

They bought a lot in the Tipton Trail subdivision of Bloomington. They are both runners and run on the trail nearly every day. They have a view of the trail, prairie and a lake from their back deck.
They started building the house in the summer of 2011 and moved in just before Christmas last year.

When they designed the house, “we really did a lifestyle evaluation,” Laurel said. “We wanted it to be very conducive to our lifestyle.”

They thought about what they didn’t use in their current home and what they couldn’t live without. They wanted a big open space where it was easy to entertain, with a lot of natural light, and they wanted to use as many environmentally-friendly materials as possible.

The kitchen was where the Schumachers put a lot of thought, time and money.

“We really thought about the kitchen and the flow of it,” Laurel said.

“That’s where everybody is,” Larry added.

They used a variety of surfaces and finishes, including two different stains for the walnut cabinets and bar. The countertops are soapstone, with a marble surface for the baking area.
“It adds an element of interest,” Laurel said of the different stains and surfaces. “We were striving to have something that didn’t look like everybody else’s.”

One cabinet holds a mixer on a shelf that can be raised for use, then lowered back into the cabinet. In their previous home, the mixer was on an upper cabinet above the washing machine and difficult to get to.

The high-end appliances include a double oven with a warming drawer, a pot filler faucet at the stovetop and a built-in drawer microwave.
Between the kitchen and laundry room is a large, walk-in pantry.

The Schumachers couldn’t find a banister that suited them so Larry cut, sanded and stained the pine banister himself, as well as all the home’s wood trim.
The kitchen is open to the living/dining area, with its wet bar. Windows across the back of the house look out onto the deck, and transom windows above the front door and a skylight above the dining area add more light.

The solid concrete fireplace in the living area was designed by sculptor Dann Nardi. The Schumachers picked a curving design from proposals Nardi made, as well as the shade of the concrete. Larry helped Nardi install it.

The deck was important for the Schumachers, who love the outdoors. It has watertight aluminum flooring and railings. A portion of it is covered, with a ceiling fan and a gas grill. A raised vegetable bed is down a set of stairs leading to the yard. The Schumachers often eat outdoors.

“We knew we were going to have something like this, but we didn’t know how well it was going to turn out,” Laurel said.

The master bedroom has a door opening onto the deck. The master bathroom has a steam shower with aromatherapy function, with eucalyptus/menthol and lavender scents. It has a zero entry and the floor slopes slightly to the drain along the back wall of the shower.

The floors in the master bathroom and the garage have radiant heat, which Larry installed.

The walkout basement has doors onto a back patio. The Schumachers installed a key pad for the patio door, so they wouldn’t have to take a house key on runs. The basement has two bedrooms, a full bathroom, a seating area with a projector TV and a bar.

The entire house is wired so the electronics can be controlled from an iPad or phone.

The Schumachers also thought about the future and included things in the house they might want some day. For example, the first-floor office has a large closet which now contains their printer and other equipment. But it could serve as a clothes closet if they want to turn the room into a fourth bedroom. The deck and garage have outlets for TVs and the deck is set up for a hot tub if they ever want one.

The house has a geothermal system for heating and cooling. The Schumachers used low-maintenance steel roofing on the section of roof over the living room and the back deck.
They recycled all the building material they possibly could. The walnut floor in the kitchen and living/dining area is laid on top of recycled milk cartons. They also installed a whole house fan in the attic, something they had in their former house.

Every decision about the home was thoroughly researched, Laurel said.

“Our focus was on this house, every night and every weekend,” Larry said.

“There’s a lot of sweat equity in this house,” Laurel added. 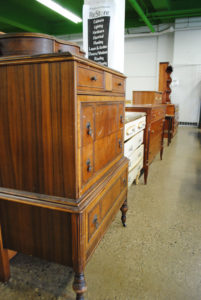 Upcycling. It’s a new word for a new year.