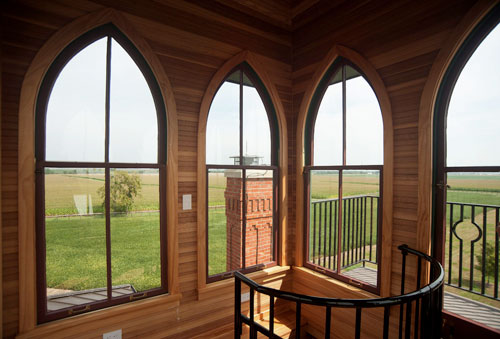 Homes: A family treasure in the cornfields

The McDowell House in southern Vermilion County is a treasure of family history.

The original Italianate house was built in 1874, on land the McDowell family homesteaded in 1849. It’s been in the family ever since, and current homeowners Jeff and Minerva Partenheimer restored the home – which had fallen into disrepair – and built a large addition onto it.

“We wanted to keep it standing for another 100 years,” Jeff Partenheimer said.

He is the great-great-grandson of the home’s builders, John A. and Emma C. McDowell.

While the Partenheimers did extensive work to the home to renovate it and restore as much of the original materials and architectural details as possible, all the home’s occupants helped to preserve it.

“Everybody had a hand in keeping it alive,” Partenheimer said, noting the family once had 640 acres surrounding the home. That dwindled to the current 16 acres when family members fell on hard times during the Depression.

The Partenheimers bought the home in 2004 from Jean Bollar, the granddaughter of the home’s builder. Bollar had purchased the house in 1984, saving it from being demolished. She did a lot of cosmetic work to the house to improve its appearance, Partenheimer said, but it continued to deteriorate structurally.

“Without her, the home would have been bulldozed down for farmland. She saved the home,” he said.

Bollar was a history buff, as is Partenheimer, and she told him stories about the family members who occupied the home over the years. She also left him boxes of letters written in the 1800s.
“She brought it all to life for me,” Partenheimer said.

And he’s brought the house back to life.

The Springfield architecture firm of Melotte Morse Leonatti Parker did the design work for the renovation and addition, and New Prairie Construction of Urbana was the contractor. The first phase of the work – taking about a year and a half – was stabilizing the exterior.

The solid brick home had been tuck-pointed over the years, but not with compatible materials, said Jill Mulder, one of the owners of New Prairie Construction. She said the bricks are soft and the mortar can’t be harder than the bricks, or else the bricks will freeze in cold weather, then crack and break.

The original mortar was analyzed by a Chicago firm, then the entire house was tuck-pointed with 100 percent lime mortar, Mulder said. Twelve brick masons from Chicago spent eight weeks doing the work. Thousands of damaged bricks were replaced as well, using old bricks salvaged from the foundations where a root cellar and smokehouse once stood.

Some of the salvaged bricks were used to build a wraparound porch with posts and gingerbread trim matching what was there originally. The bricks were also used for a fireplace in the master bedroom in the new portion of the house.

Inside, the Partenheimers “spent a lot of time in the old parts trying to reclaim them as much as they could and still have it so a person today could live (there),” Mulder said.

“(Minerva) spent a lot of time trying to not lose the Victorian aspect of the interior but have it still be a place that her things could go and they could live there,” she continued. “I think she did a fantastic job.”

The Partenheimers put a new mantel on the dining room fireplace, but the fireplaces in the living room and parlor have their original mantels. The parlor fireplace mantel is wrought iron with a faux marble finish. The couple left a bit of the original faux finish on the mantel and refinished the rest of it.

Nearly all the home’s wood trim and moldings are original, and much of the trim features rope braiding. The lighter, golden color of the varnish in the parlor dates to the 1890s, while the darker brown varnish on the upstairs woodwork is the original color.

Mulder said her crew had to match the original woodwork in places where any changes were made – for instance, adding a door or a closet.

“Making it all and getting it all to fit together and look like it once did, that was fun,” she said, adding the baseboards and casings were different sizes in different rooms.

The staircase banister had been covered with layer upon layer of varnish over the years, so the wood looked almost black. The varnish was stripped to reveal burled walnut insets in the newel post and alternating walnut and oak spindles. The banister also features rope braiding and gingerbread trim.

The interior doors are all poplar and have no grain. They were originally painted with a faux grain, and the Partenheimers had a conservator from Chicago restore the faux grain look.

The conservator – who also refurbished the staircase – matched the floor stenciling on the only original floors in the home, in the front entry and an upstairs hallway just above the entry. Those floors had a stenciled pattern that had been worn away in the high-traffic areas. The conservator repainted the stenciling to match the pattern that could still be seen in the portions of the floor that weren’t worn.

The transoms above the doors are original, and the Partenheimers were able to keep and reuse all the original window frames, but they replaced all the windows except one. It’s now an interior window, between their breakfast area and the garden room that is the transition to the new addition to the home.

The home’s kitchen is in an area that was originally a pump room for drawing well water. The original kitchen is now the breakfast area. A back door was removed and the space was closed off with an arched inset that holds a small wine cooler. A wall with a window was removed to open the space between the kitchen and breakfast area.

The Partenheimers didn’t touch a back stairway leading from the original kitchen to what was once the servants’ quarters upstairs. Jeff Partenheimer said he wanted to preserve the 140 years of bootmarks on those stairs.

Before Bollar bought the home, its furnishings were sold at auction. Some of those items were repurchased, including a bed and dresser in a guest bedroom on the second story. The room also contains a wicker rocking chair that Partneheimer bought at the auction and restored, as well as a dress dating to the late 19th century that belonged to his great-great-grandmother, Emma McDowell.

Bollar found out who bought the original shutters that now hang on the first floor of the home and the decorative corbels hanging below the home’s eaves, and she repurchased them. The Partenheimers had them all restored.

The roofline of the house originally had an integrated gutter system, and whenever a portion of the gutter became rotted, it was simply sawed off, so the roofline shrank, Partenheimer said. It had to be extended again so the corbels could fit under the eaves.

The shutters on the home’s first floor are original, while those on the second floor are new. The Partenheimers had new hardware cast to hang the shutters as they were originally. The forest green of the shutters is their original color.

The home’s cupola caught fire when it was hit by lightning in the 1920s. Scorch marks are visible on the rafters in the attic. A woman and two boys in the house put out the fire with a bucket brigade up the attic stairs and saved the house.

The Partenheimers had a cupola built, based on the design of the original, and used the original Gothic window frames saved from the fire. They added doors that open onto small balconies for a spectacular view of the surrounding farmland.

One of the most challenging aspects of the project was adding heat and air conditioning and upgrading the electrical system in a solid brick house, Mulder said. She and her crew didn’t want to build chases, or soffits, in the rooms to hide the ductwork.

Instead, “We took a lot of care to open things up and reframe them to make spaces,” she said.

Ductwork runs from the first floor to the attic through a small closet between the breakfast area and guest bathroom, and it is hidden under the floors and above the ceiling on the second floor. Workers also cut channels in the brick for new electrical wiring.

“It’s certainly the most extensive restoration of a residence (we’ve done),” Mulder said.

“It was only because it was such a unique project and they were really interested in saving the old house that we got involved in it,” she said, noting the company usually works in Champaign-Urbana and wouldn’t travel so far for work.

The garden room – a conservatory-style space with an expanse of south-facing windows – is the bridge between the old and new portions of the home. The room features a bay window matching the one in the living room of the original house and a Rumford fireplace built by Steve Halfar, a Champaign brick mason, with a limestone fireplace mantel from France.

The addition has trim with rope braiding and baseboards the same height as those in the original part of the house. It includes a library/office, a master bedroom suite with the fireplace built from salvaged bricks and a private garden off the master bedroom. The garden has a southwestern influence, including a Mission-style door with a handle and hinges forged by a blacksmith – a nod to Minerva Partenheimer’s hometown of San Antonio, Texas.

In the basement is a home theater, an exercise/storage room and a wine storage room featuring a floor of tiles from a 19th-century French cathedral and a tabletop from the home’s original kitchen table.

The renovation of and addition to the home took seven years. The Partenheimers were living in the Dallas area during that time, and when they retired, they moved here to live in the home. They managed to direct the work on the home mostly from afar, by email.

They held a family gathering at the home a few years ago, when 90 descendants of John and Emma McDowell came to see the restored home.

“They were so committed to what was best for that house. It’s very rare,” Mulder said of the Partenheimers. “We’ve had the opportunity to work for about three (homeowners) with the resources and willingness to do more of a restoration than a remodeling of a historic old structure. Certainly Jeff and Minerva’s was the most extensive.”

The couple put ownership of the home in a trust. It won’t ever be sold. Instead, they plan one day to pass it along to another family member – a new generation to care for the family home.

The wheel of life

If Tom Brewer had not been extremely ill his senior year on 1967 at Champaign High School-the last year Champaign had just one high school- this story may just well have been about Brewer the accountant, not Brewer the potter. 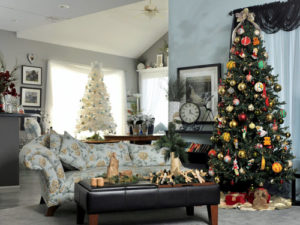