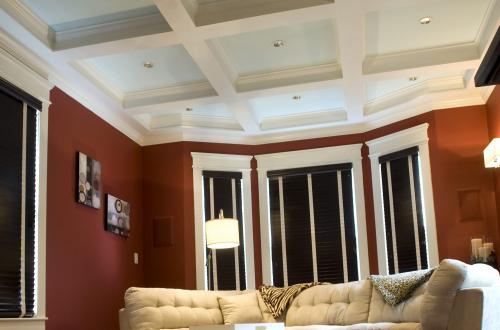 Chad Ebbert has a knack for visualizing what will look good in a home. As owner of Precision Painting, he has worked in a lot of nice houses and made a practice of noting what he likes about them.

So when it came time to renovate his own home, he had strong ideas about what he wanted. Ebbert bought his home on Park Avenue in Champaign, near Central High School, in February 2010.

When he saw the 1920s-era home, he fell in love with the layout and uniqueness of the house. He loved the location near downtown, and the mature trees. “I like that everything here felt like it was established,” he said.

The former owner, the late Danny Sullivan, didn’t want to see the home turned into a rental and liked Ebbert’s vision for the home, Ebbert said. The home already had a new roof and an electrical upgrade. But otherwise, it sorely needed remodeling. Ebbert designed the remodel himself and did nearly all the work, with the help of his contractor, Jim Bowen of Casey, who is a family friend.
The kitchen presented the biggest challenge. Visitors coming in the back door had to go around a counter to enter the kitchen, which was broken up into two rooms. The refrigerator and sink were in one, with a doorway to a bathroom between them. The oven, another sink and a dishwasher were in the second room.

The wall between the two rooms was load-bearing, but Ebbert and Bowen tore it out and replaced it with load-bearing beams in the ceiling. Ebbert replaced the counter with an island, closed up the bathroom entrance, and moved a window. The kitchen has its original cabinets (repainted, with updated hardware and added trim), door and window casings, and windows. Ebbert added a custom-made space for the refrigerator, and he created cubbyholes above the refrigerator and oven, one of which holds a TV. He spends much of his time in the breakfast nook, where he added an arched ceiling. The space was once a mud room at the original entrance to the house. Ebbert obsessed over every detail in his home. He went to St. Louis to pick out the granite slabs that were to be used for the countertops. He painted the dining room four times, beginning with a dark navy, then trying a gray-green and a green. All too “gloomy,” Ebbert thought. He was concerned the chocolate brown he tried next would be too dark, but it looked just right with all the white trim in the room, he said. He tried pendant lights with red ceramic shades over the kitchen island, but they made the dark wood floors look purple at night. He gets lots of compliments on the ones he chose featuring metallic shades with an open pattern. Ebbert loves lighting, and he estimates the home has about 160 recessed lights. He made sure those in the kitchen were wired so that they could be turned on and off at a single switch. In the library, he painted the interior of bookshelves a robin’s-egg blue and added recessed lights.

Ebbert reconfigured the downstairs bathroom, working around a chimney and using part of the original bathroom, a closet and portions of the dining room and library.
The entire house is wired for speakers, and there’s a custom-built stereo cabinet in the living room. Ebbert can control the sound anywhere in the home using remotes that send out an FM signal.
He replaced the original brick on the fireplace with cultured stone, and added a coffered ceiling in the living room.
Upstairs, two skylights were added at the top of the stairs, in a space that is now an office.

The back of the house was substantially remodeled, just as it was on the first floor. Ebbert turned a small bathroom into a hallway laundry area, with a countertop of the same granite used in the kitchen.

He considered using a large storage area at the back of the house as either a bedroom or sitting area, but decided a bathroom was a better fit for the space. Ebbert took part of a deep closet and used it for the shower. The main portion of the bathroom — which runs the width of the house and is surrounded by windows — includes a whirlpool tub. Renovations began as soon as Ebbert bought the house, and he finished the work in October 2011. Ebbert’s intention was to do the renovation once and do it right, so he would be satisfied with the result for years to come.
“I put my heart and soul and money into it. I’m glad it turned out,” he said.

While he was renovating the house, Ebbert got to know Danny Sullivan before Mr. Sullivan’s death in August 2010. He also got to know Mr. Sullivan’s friends, and heard stories about the time they spent in the house. “There’s more to it than just a house for me,” Ebbert said. “I feel like (Mr. Sullivan) is a part of it,” he continued. “There’s a story that goes with the whole house. I’m just a chapter in it.”

Chad Ebbert won a 2011 PACA Heritage Award for his renovation of his Champaign home.

The Heritage Award committee noted that Ebbert recreated original details in the home, including removing aluminum siding and painting the original clapboard and using original door and window casings. “The house now has the amenities of a new home but still contains the old world charm that cannot be recreated today,” the committee wrote.

David and Alyson Stephenson fell in love with their open-concept ranch home.