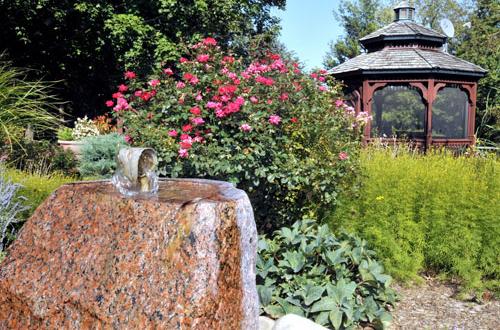 Sandra and David Lampert have filled their property with trees, shade plants, and annual and perennial flowers.

The crabapple tree along the driveway was the first tree Sandra Lampert planted when she and husband David moved to their rural Monticello home in 1967.

Other than five towering maple trees that were already there, the Lamperts planted nearly every tree on the property, including pink and white dogwoods, redbuds and a Korean dogwood that blooms later. They have three crepe myrtles that thrive in more southern climates – one in a pot and two in the ground, well-mulched in the winter.

They planted pine trees at the start of Lampert Lane, leading to their home. They planted fruit trees, including apricot, peach, plum, cherry, apple and Asian pear trees. In 2011, they planted new Norway and blue spruce trees, which will eventually replace the aging pines they planted in the late 1960s.

Of the five large maple trees on the property when they moved there, three remain. The Lamperts had to take out one of the maples a few years ago. The stump remains, just south of the house between their deck and their greenhouse, and they plan to put a playhouse on top of it for their great-grandchildren.

The Lamperts bought the old farmhouse they live in for the property surrounding it, not the house. But that’s where they raised their six children. They originally bought 15 acres and added another 9 acres later that include a large pond.

They remodeled the home’s kitchen and added a bathroom in 1991. They added a sunroom to the house in 2002. It’s where they host large family celebrations, including Thanksgiving dinner.
And Sandra Lampert made continuous changes in landscaping the property. Her grandfather was a farmer and vegetable gardener and her grandmother and mother always gardened.
“My grandmother used to have a wonderful cottage garden. She planted stuff from seed and they just grew,” Lampert said. “I remember when I was a little kid, her garden was just wonderful.”
Once her children were grown, Lampert had more time to garden. And the property and plants on it require a lot of time and care.

During last summer’s drought, Lampert and her husband watered portions of their gardens daily, and the new Norway and blue spruce trees had to be watered weekly. “I think everything would have died if we hadn’t,” Sandra Lampert said, adding she didn’t want to start over with all her hostas and ferns.

The property has a lot of shade, and Lampert likes shade plants.
“There are so many varieties and different colors. Some of them are small, some of them are big and some of them are gigantic,” she said. “It’s really fun.”
Lampert plants perennials along the driveway, with a few annuals for color, and tomato plants at the far end. Her plants include marigolds, zinnias, amarynth, several varieties of sunflowers, vincas, cosmos, lilies, hibiscus, coneflowers of various colors (which provide a feast of seeds for finches) and black-eyed Susans.
She also likes grasses that grow to a good size.

“I think I never met a flower I didn’t like,” Lampert said. “I like seeing other people’s gardens and what they’re growing. Some people have really good luck with things I don’t have any luck with.”
She has a large vegetable garden and a greenhouse, built 10 years ago, for overwintering potted plants.

The Lamperts added a water feature – a waterfall and pond – in 2002. The pond has lily pads, but last year it had no fish. There were koi and goldfish the previous year, but mink ate them all.
A few years ago, one of David Lampert’s employees made them fountain from a large rock they found along Illinois 10. The water spout is shaped like a jack-in-the-pulpit.

A year or two after putting in the water feature, they added two gazebos, one near their house and one at the home of one of their daughters, across the large pond at the back of the property.
The property is now a kind of family compound. David Lampert’s machine shop is just across the lane from their home, and two daughters and a granddaughter live nearby – one daughter across the lane, near the machine shop; the daughter across the pond; and the granddaughter and her family at the end of the lane. Another daughter lives about 3 ½ miles away.

The Lamperts set up a tent for the summer, with tables beneath it, near the pond. It’s the site for various family gatherings for their six children, 13 grandchildren and five great-grandchildren, including a daughter’s class reunion and a great-grandson’s birthday party.

The property keeps the Lamperts plenty busy – pulling small volunteer saplings and planting and moving various plants, in addition to the watering. But Sandra Lampert has plenty of projects in mind.

She planted ground cover – several varieties of vinca and low grasses – and many bushes that will flower, such as snowball and verbenium, on a hillside behind her home and now she’d like to terrace the hillside.

Lampert wants to have a climbing rose cover a trellis near her patio. She would like to put in a brick sidewalk to replace a stone walkway, and she’d like an outdoor kitchen with a built-in grill, a fireplace and seating.

And there’s the playhouse designated for that old maple stump.

“They say a garden is a work in progress and you never really finish. I take that to heart,” Lampert said. “It’s a growing thing, and it keeps changing.” 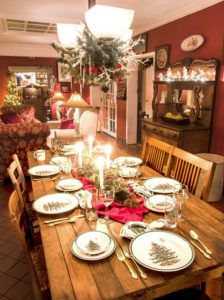 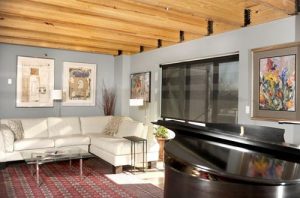