It seems like gardeners get sad in the days of autumn

It seems like gardeners get sad in the days of autumn, like their days in the dirt are over. Not so, according to local expert gardener, Emily Kroner. Besides the fall planting of new grass, trees and shrubs, which is the best time to plant these items, there are many flowers that bloom well into fall, giving a show of color even as the temperatures dip into the thirties and even the twenties. Plus, there are the beautiful colors of pumpkins, gourds and squash that make for cheeriness in the fall.

“The power of flowers,” Kroner said.

Hardly anyone can deny the perk-me-up of a colorful array of blooms, so as the days get shorter, and a little seasonal affective disorder (SAD) sets in, it’s nice to know that there are an array of flowers that bloom all autumn long. In fact, there are blooms that are used for medicinal purposes, too. Three of these grow and bloom well into the autumn season right here in Central Illinois.

Shane Cultra from Country Arbors Nursery, Urbana, said that fall is a wonderful time to put in perennials. Country Arbors has been in the business for five generations. They have been around since the mid 1800s.

“We do things differently than we did all those years ago,” he said. “You can plant eight months out of the year. There’s all kinds of new technology, like drip irrigation that can aid a gardener.”

Cultra can be seen on the syndicated show, “Mid-American Gardener” on PBS.

“Fall planting is cool on the body. Not like summer,” Cultra said.

“Chamomile is a good one and so is calendula,” Kroner said.

Another restorative flower with power is Echinacea. All three are fall bloomers here in Central Illinois.

Calendula is a member of the daisy family, also being called “Pot Marigold.” Salves and topical treatments using the oil from the petals, seeds and stems are very healing, and have been used as homoeopathic healers for centuries. Now, it is scientifically known that the flower possesses glycosides, which have shown to be anti-inflammatory, antiviral and anti-carcinogenic. Calendula can bloom well into 30 degree temperatures.

Chamomile is another healing flower. Many know of the feeling of calmness that its tea can impart on those who drink it. It also eases digestive problems, too. Its bright flowers will bloom well into the fall season. The old blooms can be dead-headed to ensure new blooms will emerge and more abundantly, too.

Echinacea is also known as coneflower, and has many varieties. The North American Natives used this flower as a medicinal herb. Various tribes noted that deer and elk would seek out its blooms to consume them. It is used to treat coughs, cold and sore throats. There are fat-soluble compounds called alkylamides in echinacea, which regulate cytokines that produce inflammation in the body. Its blooms are long-lasting and it also has nice seed heads that look fabulous in their own right.

Black-eyed Susans, the nickname for rudbeckia, also have beautiful seed heads that emerge as the blooms fade in late summer and early fall.

Kroner said that bachelor buttons, asters, and sedum are very nice blooms that last well into autumn. There is also the bold color of pumpkins, gourds and squash, which makes for a nice pop of color when a chill in the air sets in.

“Bachelor buttons look gorgeous, too. They reseed well,” she said. “They are cool-hardy.”

They are often referred to as cornflowers and have bright colors such as blue and red and white. They are a great cut flower and traditionally were worn in the lapels of men’s suits, hence the name “bachelor button.”

Asters are another daisy-like flower that come in colors of pink, purple, blue and white. The word “aster” literally means “star” in Latin. These starry blooms emerge in late summer and early fall. They are considered to be ultra tough and will keep blooming when many other flowers have faded.

A great variety of sedum that grows well in the Central Illinois area is Autumn Joy. According to Kroner, they resemble a cauliflower during the summer, but when fall ensues, the blush of color emerges.

Flowers are wonderful, but who can deny the cheerful look of bright orange pumpkins, colorful squash and interesting-looking gourds? Pumpkins even come in a variety of different colors, sizes and textures. There are even white pumpkins. They can be displayed in the yard, on the porch, or even brought inside for a pop of color. And pumpkins make for family fun with the ever popular pumpkin carving of Jack-o-Lanterns for Halloween.

IS IT SAGE OR SALVIA?

All sages are salvias. Sage is referred to the plant used for cooking or medicinal purposes, and salvia is associated with the flower. They are part of the mint family, and that is evident in their fragrant smell. In fact, it is the largest genus in the mint family with over 1,000 species. Birds and bees love it. If it is kept in a well-drained soil, it will bloom into early to mid-autumn. If it is not planted in well-drained soil, it tends to flop-over in appearance.

COLOR IN THE SNOW

Pansies, violas and Johnny Jump-ups are a genus of flowering plants in the violet family Violaceae. They are somewhat delicate looking, but they are very hardy when it comes to colder temperatures. “They can look kind of sorry in the heat of summer, but can bounce back and look spectacular in the fall,” Kroner said. She said that is why we see them so early in the spring and near-frost temperatures can have virtually no affect on them. She likes them all, but prefers the pansies the most because of their large blooms. “They are Proven Winners, which means they can take some cold weather,” she said.

The word mum is actually a nickname for chrysanthemum. They are everywhere, and are a proven fall favorite in Central Illinois.

“They’re beautiful and they’re hardy,” Kroner said. “There are so many wonderful kinds of mums-chrysanthemums- out there: football mums, button mums and daisy mums are just some of the great varieties.”

There are three types of flower shapes: decorative, pom-pom and daisy. Decorative have long, tightly overlapping petals. Pom-pom shaped mums are small globe-shaped flowers that are petal packed. Daisy shaped mums are not to be confused with actual daisies; they resemble the daisy flower with a center and surrounding petals.

There are also florist mums and garden mums. The big giant floral bouquets and corsages are made with florist mums. The garden mums are just that-they are planted in containers and in the garden. They are both related to the same parent plant however, that originates in China.

Believe it or not, they are one and the same. What defines if the mums last a “season” or “seasons” is when they are planted. Plant a mum in the fall and it will, most likely, not return in the spring. They are relatively inexpensive when it comes to the price of other perennials, too, so it is not such a terrible thing. However, if wintering over is desired, the mum needs to be cut back and mulched.

The best results come if mums are planted in the spring. The plant will have time to establish a good root system before winter’s harsh coldness gets a chance to freeze and kill those roots. To get it to bloom well in the fall, however, the plant needs to be pinched back before it blooms in the summer. Pinching back is the process of removing buds before they open. It forces the plant to rebud, and will make for even bigger blooms later on.

There is no reason to be blue as the days get shorter, the air gets a chill and the sky can be a little dreary. Pops of color in the naturescape of Central Illinois can help with that blah feeling and keep spirits high, even if the temperatures are low.

To see more stories and full-color photography, secure your subscription to At Home in Central Illinois by going to: http://www.news-gazette.com/store/news-gazette-subscriptions/purchase-two-year-subscription-home-magazine.html. Or call: 217-351-5252. 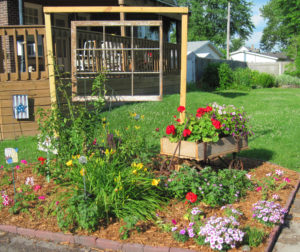