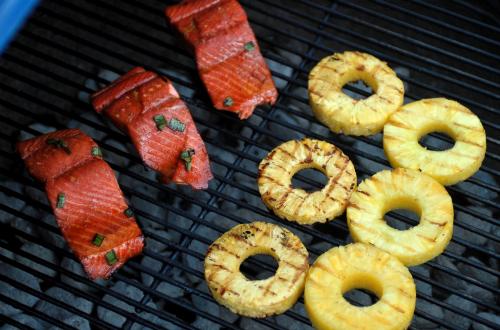 Thinking beyond burgers and steaks

When the long summer days arrive and the weather heats up, dinner preparation moves outdoors.

Mike Potts of Champaign grills three or four times a week during the summer. But cooking outdoors is not limited to the warm-weather months for him. He sometimes shovels a little snow off his driveway, sets up a small hibachi grill and cooks outdoors in the winter.

His grilling is also not limited to burgers, steaks or chicken.

Here, Potts gives At Home readers his tips for a successful grilling season.

Potts has loved grilling since he was a child. “My dad liked to cook outdoors a lot. That’s where I really got the bug,” he said.

He learned to love barbecue when he was in school in Louisiana.

Potts has a custom-made grill and smoker he can tow behind his car. He has used it for barbecue competitions, and to cook for large gatherings at his church.

He also grills on a dome-style Weber grill, and he has the small hibachi grill.

“The easiest way to get started, if you’re thinking of cost-effectiveness, is to get a very small charcoal grill. They’re not that expensive and you can get them almost anywhere,” Potts said. “Get a small charcoal grill, a bag of charcoal, light the thing and grill on it.”

From there, he said, the sophistication and price of grills go all the way up to outdoor kitchens with grills connecting to a home’s natural gas. Another basic option is an inexpensive gas grill with an adjustable flame.

Potts recommends lump charcoal, which he said has gained in popularity recently and is different from charcoal briquettes.

Charcoal briquettes are charred hard wood that has been compressed and contain a binding agent. The wood is not compressed in making lump charcoal.

He sometimes starts with briquettes, then adds lump charcoal on top.

Whichever kind you use, put the charcoal in a pile and let it burn down until you get a white ash on the exterior, Potts said.

“If you still see briquettes that have black on them, it’s not ideal,” he said, explaining they haven’t ignited yet. “You want the entire briquette ignited. (Otherwise), it gives off a different flavor than when it’s burning.”

The ash also helps reduce flare-ups caused by drippings from the meat, he said.

Other options for fuel include propane gas, which allows you to easily adjust the temperature while cooking, just like with a stovetop; and newer infrared technology, which generates higher temperatures and heats up much faster.

“I don’t think there is anything that beats a great hamburger on the grill. Also, I like a great pork chop that is done well,” Potts said, adding he also likes to grill chicken, salmon and trout, and that he sometimes grills scallops or shrimp.

“A lot of people think grilling is hot dogs, brats, burgers. If I get real exotic, I’ll do a steak. It is way beyond that,” he said. “I like to change it up a lot and try different things.”

Whatever you are grilling, though, Potts said an internal thermometer is a must — particularly for poultry or other meats that need to reach a certain temperature to be safe to eat.
“You have to be able to take temperature readings, because you don’t really know what the temperature of your grill is,” he said.

With chicken, “if the juices are running clear, you are on the right track. If you still see pink or red, no,” Potts said. With a whole chicken, “get the temperature out of the thigh, which is the most difficult to get fully cooked.”

With burgers or other meats where it is harder to get a temperature reading, just cut into the meat and check what it looks like, he said.

Potts and his wife Jamee make their own marinades for the food they grill. They use honey, orange juice and ginger for salmon, and teriyaki for chicken. For steaks, they use a dry seasoning that is a combination of black pepper, salt and garlic.

While they often cook meat, grilling “is not just for meat-eating people,” Potts said.

“There’s vegetables, there’s fruit. I think some people think grilling is just for carnivores. I don’t agree with that,” he said. “There is so much out there you can grill. You can grill corn. We’ve grilled green beans.”

Potts said his family eats less meat than in the past, and he sometimes grills all-vegetable shish kabobs and marinated portobello mushrooms. He’ll bake potatoes in a covered, Weber-style grill, and he’ll steam green beans or carrots inside foil.

“What’s really great during the season is corn on the cob,” Potts said. “Leave it in the husk, soak it in water, let it drain a little bit and put it on the grill.”

One of his favorites, though, is putting a whole pineapple on the grill.

“It draws the sugars out and caramelizes that on the edges,” he said. “It is fabulous.” 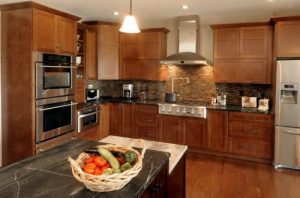 A labor of love

A Bloomington couple builds their dream house, with help from friends 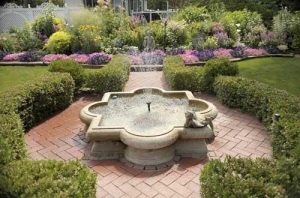