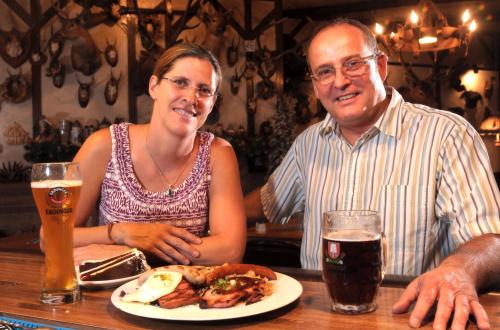 Dining: A taste of Germany in Central Illinois

To include an Oktoberfest celebration with authentic German food this fall, plan to visit Bayern Stube Restaurant in Gibson City.

Start with a pretzel, cheese spatzle or the Black Forest ham platter. Choose from a variety of schnitzel dishes or beef, pork or sausage entrees, with red cabbage, sauerkraut or potato pancakes on the side. Don’t forget a German beer. And dessert choices include Black Forest cake.

Erika and Peter Schnabel opened the restaurant opened in 1991. Peter Schnabel was in hotel and restaurant management in his native Germany, including running a family inn in Bavaria.
He and Erika came to the U.S. to run Jumer’s Castle Lodge, before they opened Bayern Stube.

Their daughter, Jeanne Schnabel, started working at the restaurant while a teenager. She’s been a waitress, bartender, cook and bookkeeper. After moving back to Germany for several years, she and husband Guenter Loesel returned to help with Bayern Stube, then took over the restaurant from Schnabel’s parents in 2005.

“I really like the cooking and bringing people food they are not familiar with,” Schnabel said. “Some people have been to Germany. It brings back memories to them. I like to give people who can’t go to Germany the chance to eat authentic food here.”

She also enjoys running her own business.

While the menu has remained mostly the same for many years, Schnabel’s parents tried different dishes in the beginning.

“Some things were probably a little too German or foreign,” including meatballs in a caper sauce and some herring dishes, Schnabel said.
The most popular items are a pork roast and a filet, she said.

The restaurant offers specials such as rouladen, thinly sliced steak rolled with some combination of mustard, red peppers, carrots and onions and braised; and beer braised pork shanks. Both are offered during Bayern Stube’s Oktoberfest celebration, which will run from Sept. 28 to Oct. 27 this year.

Schnabel gets the sausages she serves from a Bavarian sausage maker in Chicago. Many of the recipes came from her family. For example, the goulash recipe is her mother’s. “Everybody thinks there is some executive chef in the kitchen, but it’s just home cooking. Nobody went to culinary school,” Schnabel said. “The cooking is just different because we learn it from generation to generation.”

Much of the restaurant’s décor has also been handed down from an earlier generation. About half of the animal trophies on the walls came from Schnabel’s grandfather, Dietrich Lutz, who was a game warden in Germany. The dolls, beer steins, antiques and collectibles are from Schnabel’s mother.

“There are things in here that used to hang in our house, growing up,” she said. 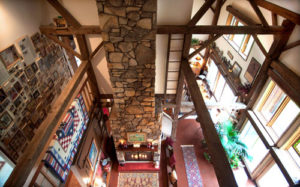 Decorating ideas that will carry you from fall through winter