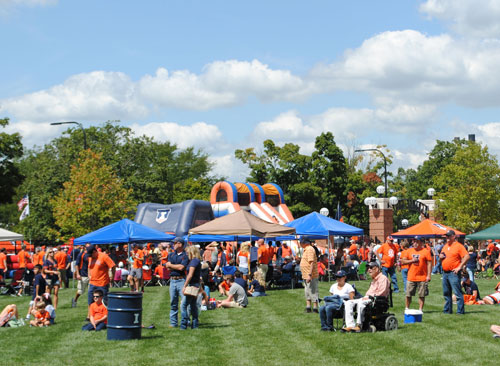 Be seen at the scene, Ideas: Illini Tailgate

Be seen at the scene, Ideas

Ever since I can remember, I have been tailgating at the University of Illinois football games. My parents had season tickets and they were all in. So, when I started doing research on the history of tailgating, I was surprised that “officially” the first tailgate probably started somewhere else other than the UI.

That’s probably true, but I do know this: the UI perfected the art of tailgating and helped make it a constant for football culture. The reason for this humble opinion of mine is because my family is full of football enthusiasts, and we still travel to all sorts of football games: scrimmages, prep games, collegiate division I, II and III games, pick-up games in the neighborhood, and even had our own version of a family football game at my Uncle Keith’s big lawn in DeWitt on Thanksgiving Day. After traveling to all of these games I can tell you one thing: nobody was tailgating like we were here at the UI at these other games.

I remember when I started college at Illinois State University, I was all excited for the first football game and went out to the tailgate. There was one guy having a cigarette by his Vega. Of course, that was the 1980s and ISU now has tailgating, but in those days I missed Champaign-Urbana and the fun of the pre-game celebrating!

Luckily, tailgating is alive and well here on campus, and when At Home in Central Illinois ventured over to the tailgate for the season home opener against Murray State we were greeted by that same spirit of celebration that I have known for my entire life. I met some great sports who let me take their pictures for our feature. In fact, they were really excited.

“We’re originally for Danville. We do this quite a bit,” Ken Cottle, Whitneys’ husband said about the commute to the game.

They were having a great time with their boys, two-year-old Easton, and four-month-old, Jackson.

Tailgating at the UI is just friendly, and by that I do mean the spirit of the participants, but I also mean that the UI rules for tailgating are friendly, too. The successful debut of Grange Grove last year made for some excitement within the UI tailgate community. This year’s premiere was a celebratory sea of orange and blue, and the lovely weather made for a perfect debut.

The rules for Grange Grove apply to this season, as well. UI Associate Athletic Director Brad Wurthman said that besides the excitement of country artist Jerrod Nieman, who played at the UI- North Carolina match-up tailgate, fans will be able to enjoy country music singing group, Parmalee who will perform at the homecoming match-up between UI and Minnesota on Oct. 29.

“We want fans to enjoy the season,” Wurthman said.

Grange Grove opens game days at 7 a.m., as well as the other parking lots that tailgaters set-up in and enjoy the festivities.

“For Grange Grove, people can load the night before from 5 to 7 p.m. The next morning at 7 a.m. they can come and go as they please. Everything is free, even the concerts, which will start two hours before kick-off,” he said.

Fans can also purchase tickets to the game- if they’re still available- and enjoy the excitement of the Fighting Illini under the guidance of Coach Lovie Smith.

“It’s BYOB, and we want to encourage fans to consume responsibly, bring a grill and have some fun,” Wurthman said.

The Fighting Illini Walk- that happens a few hours before kick-off- was so intense. The fans erupted with cheers and shouts of excitement. It was a good place to be. The jubilation continued with the Marching Illini playing by the statue of Red Grange. There was a spirit of camaraderie among the Illini revelers.

Kids played on the inflatables, had their young faces painted and enjoyed the Kid Zone. People tapped their feet to the music, and enjoyed each other’s company. I think one of the aspects of UI tailgating that still gets me to this day is the variety of food people cook-up on their grills at the event. There were the staples of hot dogs, brats, and hamburgers. Plus, chili, some steaks, pork chops, filets of fish, and even one family had lobster tacos. There were creations like pizza on a grill, fajitas, meatballs, green beans, asparagus and pound cake. I tried the pound cake. It was wonderfully delicious.

It’s not too late to get out and enjoy the festivities before games at Grange Grove this season. The perfect fun right before another Illini match-up. For information and tickets go to tickets.fightingillini.com. 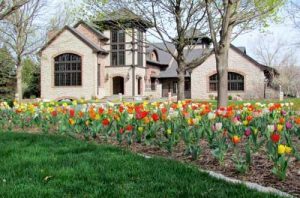 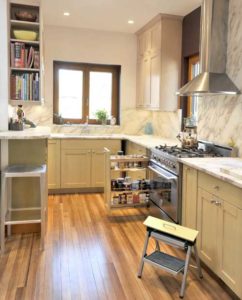