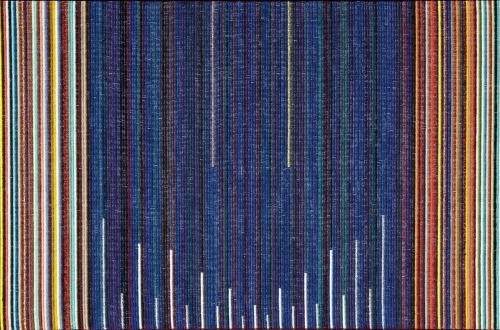 Artists: From science to art

From science to art

A local artist challenges the very idea of landscape painting

Having lived in London and Sweden and France and Israel, and with a career in chemistry to boot, it seems strange Rosalind Faiman Weinberg would become a professional artist working out of Urbana.

“I’ve always painted, ever since I was a very small child,” she said. “It was always part of my world.”

Weinberg, who grew up in London and did all her schooling there, loved studying chemistry and was well-respected in the field. But art became an inevitable transition once she dedicated herself.
“I always thought I would take a year off, and I’ve met scientists who’ve done that. The opportunity came, and I never went back,” she said. “In those days they talked about midlife crises. A psychologist pointed out to me that I wasn’t just jumping off a cliff — I’d been gradually doing this for many years.”

She said her interest in art and science has always been intertwined.

Weinberg has dabbled in science and solar plates over the last few years, but the majority of her last 30 years has been spent painting and printmaking.

Weinberg’s paintings and drawings are in watercolor, acrylics, embroidery thread and pastels, while her intaglios (a printmaking technique) are etched from copper plate and stone. The printmaking is a fairly new endeavor she’s experimenting with, even using an environmentally friendly process of solar printmaking that uses sun and water instead of the traditional acids. But painting has always been her main body of work.

Drawing from both her spiritual and scientific background, Weinberg said her work covers both traditional landscape forms and internal landscapes drawn from her mind. Whether it’s a bridge, a creek, a set of embroidered stripes or a butterfly’s wing, her paintings create a sense of wonderment amid very simple subjects.

“My abstracts, and even my portraits, I consider landscapes,” she said. “If I were to draw you, I would not only be looking at your bone structure and your hair, but at why the expression on your face exists and what you may have seen in your life up until this point.

“Really what an artist is trained to do is look — trained to see,” she added. “What is it that you see when you look around you? When you’re asked to do something? You break it down into small tasks you can accomplish.”

Weinberg works out of a studio in her Urbana home. She has held many exhibitions and been a part of many local art shows over the years.
“I consider myself a local artist,” she said. “It’s strange because I’m foreign, and much of my influence is European. I found it very difficult to understand local artists for many years. But you eventually evolve, and that’s what I did.”

Weinberg has several paintings influenced by local settings, including the Boneyard Creek.

Weinberg is hosting a one-woman show at Urbana City Hall through the end of January. She has been a part of many local shows, including one hosted by the Craft League of Champaign-Urbana, but she’s also received her share of international attention. Her work was selected by the annual Abstract Juried International Art Exhibition from approximately 600 international entries.
It may be her new profession, but art seems to own a deeper hold on Weinberg. For one of her classes, her teacher asked her to keep a diary and then make a painting, ascribing a color to each of her activities. Being the two busiest weeks of her life, the painting was manic and full of busy colors.

“In the background was music and art and literature and science, all the things I really liked to do,” she said. “When the class was over, I said, ‘Suppose I took what I really would like to be doing and put it in the foreground?'”

It would seem as though that is exactly what she’s doing.

When At Home & Away in East Central Illinois visited Country Thyme Tea Room, owner Bonnie Kaeb welcomed us despite the fact that she was busy with some big parties at the Paxton restaurant at 595 S. Elm. 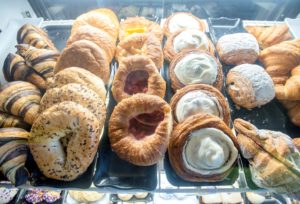