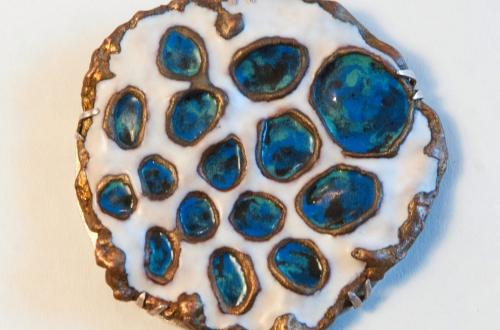 Melissa Huff draws inspiration from nature and the plant world to create her jewelry. She responds to plant forms, which to her are about growth, nurturance and new life. “I think plants can really serve as metaphor and symbol to give deeper meaning to things,” Huff said. “Artists have used nature as a source since the beginning. It’s much more than using a simple flower form because it’s pretty.

“I find plant form is endlessly fascinating. And the variety is incredible,” she said, adding that when she travels she often brings back plants not found in central Illinois. The Champaign artist has been making art jewelry at her own studio since 1995, using the processes of copper electroforming and enameling. “They work really well together,” she said. Copper electroforming “is a process that lends itself really well to organic form.”

Huff began her career as an artist after working in the book publishing world and as a manager representing jazz and acoustic folk musicians. She said her previous careers contributed to what she does now, particularly in helping her learn about marketing.

“With musicians, I was nurturing their creative lives,” she said. “It became very clear to me I’d like to nurture my own.” Huff tried a number of art forms, but found she enjoys working with metals because of their three-dimensional aspect. And enameling allows her to work with color. For the electroforming, Huff paints whatever material she is working with — whether a leaf, twig, seed pod or flower — with a pure silver conductive paint. The material is put into an electroforming bath of sulfuric acid and copper sulfate.

When an electric current is run through the bath, the copper deposits itself on the form. Huff calculates the surface area of the piece and regulates the current to influence how fast the copper builds up.
She can also paint a substance on the material in places where she does not want the copper to deposit itself.
When the copper reaches the thickness she wants, Huff removes the piece from the bath and heats it in a kiln to burn out the plant material, leaving behind a hollow copper form.
Then she’ll use enamel to add color.

“It has endless possibilities. You can create a mood with the piece,” she said. “I love playing with the color.”
Huff has used a technique called “wet packing” for years, in which she adds water to a powdery enamel to create what looks like wet sand. Then she uses dental tools to apply it to the piece. It’s a painstaking process, but produces good results, she said.

She often makes the enamel look matte or opaque, rather than the glossy enamel with which many people are familiar. Some of the original plant materials that form the basis for her jewelry aren’t obvious either. For example, one piece called “Iris Rising” is made from an iris flower with what looks like a bulb at the bottom. It’s actually a gall — an abnormal outgrowth on plant tissue caused by bacteria or insects — from a goldenrod plant.

People “are not sure what they’re looking at in terms of material or form. I like that,” Huff said. “That way you look at it and don’t just give it a label.”
Huff is experimenting with new materials now. She’s working with liquid enamels that can be painted on. Using materials that are more like paints allows her to work more spontaneously, she said.
“I want to be able to respond to what’s happening and make decisions as I go,” Huff said.

She’s also experimenting with metal clay. It’s malleable like ceramic clay, and she uses water to make it thin and paintable. It works better for more delicate forms, such as a flower with spiky petals. It would be difficult to get copper to deposit evenly on the tips of the petals through electroforming, Huff said. Likewise, it’s hard to get the copper to deposit inside the flower petals, but she can paint on the metal clay.

Most of Huff’s pieces are brooches or necklaces, and she makes some earrings. Those types of jewelry allow her to make larger pieces.
Her work has been shown in galleries in Chicago, New York City, Boston, Seattle, San Francisco and St. Louis over the years. She has a longstanding relationship with the Aaron Faber Gallery in New York City. And she has shown her work for the past decade at the Sculptural Objects & Functional Art (SOFA) Fair in Chicago.

Huff has pieces of her work in collections at the Racine Art Museum in Racine, Wis., and the Enamel Arts Foundation in Los Angeles. Images of her jewelry are included in books on enamel art. She received an Illinois Arts Council Finalist Award in Crafts in 2001.

It seems like gardeners get sad in the days of autumn