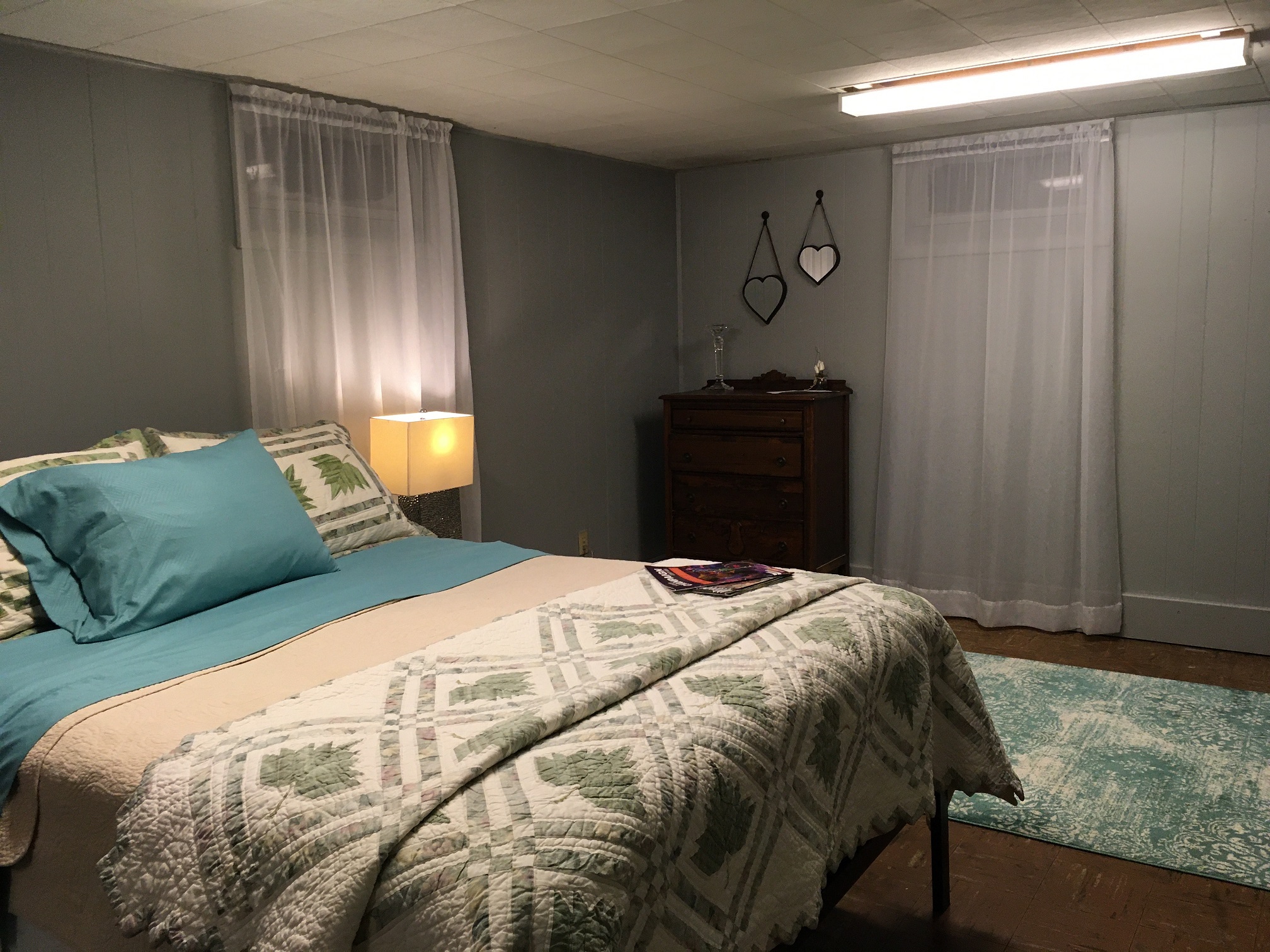 Uncategorized: This Niantic Airbnb lets you stay on a farm

This Niantic Airbnb lets you stay on a farm

Thanks to some innovative owners, a homestead with a nearly 100-year-old barn now offers up truly unique place to rest your head just outside of Niantic.

Thanks to some innovative owners, a homestead with a nearly 100-year-old barn now offers up truly unique place to rest your head just outside of Niantic.

The “Escape to Midwest Living” Airbnb suites were an outgrowth of a wedding venue business called 1912 Barn that owners Aissa and Hank Norris started. Hank, who is from Danville, and Aissa, who is from Lincoln, were hot air balloon pilots looking for a good place to fly from when they found the farm in 2009. “We fell in love with it,” Aissa said. A few years later, Hank, who works for a real estate company, received a call at his office from someone looking for a country venue to host a wedding, and that was how the 1912 Barn business was born.

In the off seasons, the Norrises enjoyed traveling and would often stay at Airbnbs. They decided their 4,000-square-foot home with features like a tennis court and enclosed year-round hot tub would make a perfect place for that as well. “So we said, ‘Let’s give it a try,’” Aissa said.

The Norrises host about 20 events like church retreats, school field trips and nonprofit fundraisers at 1912 Barn each year, with weddings booking the weekends. They’ve even been a part of some couples’ engagements.

It was an extensive process for the Norrises to be granted a special use permit for their rural business because some neighbors initially protested. “But they’ve found we don’t bother anyone,” Aissa said, adding that some even come to the Norrises now to make sure their agricultural activities don’t disturb a wedding. “It’s been a real positive.”

The Norrises see their business ventures as extensions of what they were doing previously with hot air balloons – often helping others to fulfill “bucket list” wishes. “We enjoy doing that with them,” Aissa said.

Some guests stay with the Norrises for months at a time when they’re traveling for work, while others stay for a night or two as they’re passing through. Visitors from places like St. Louis or Chicago enjoy being able to see stars in the sky at night or watch a meteor shower. The Norrises also allow brides and grooms to stay there before weddings at 1912 Barn, which operates from May through October. “We’ve found it to be enjoyable,” Aissa said.

A lot of international guests stay at the farm, and the Norrises get invited to visit countries all over the world. Just in the last year, they have hosted people from Germany, Japan, China, Poland, South Africa, New Zealand, Australia, Canada and Mexico. “It’s kind of a unique experience,” Aissa said. “We give them a little taste of America.”

International visitors sometimes remark on how different Midwesterners are from Americans in cities like New York. “They get a cup of coffee and hang out with us,” she said. “They get a whole different feel from what they see on television. We’re kind of an escape from the city without having to travel. There’s no fast face. You can sit on a swing and visit.”

Visitors are sometimes so changed by the experience that they tell Aissa they are now considering adopting a rural lifestyle themselves. It’s not unusual for one of her chickens to be sitting near the front door, watching what’s going on. “It’s just an experience people in the city never have,” she said. “They’re kind of surprised.”

Aissa is sometimes asked how she is able to let hundreds of people go in and out of her home. “I’ve never had anything stolen or lost,” she said. “And I can count on one hand the number of guests at weddings who have been rude or disrespectful, and we meet thousands of people a year.”

Although guests have their own suites with private sitting areas, they often seek out the Norrises in the large family room to socialize. “We’ll show them our barn, and they’ll spend the day with us,” Aissa said. “People who stay here say it’s so much better than a hotel. If you talk to a stranger there, they think, ‘What are you doing talking to me?’

As people from throughout the world engage in conversation at her home, Aissa said they learn more about one another. “We have so many things in common,” she said. “We get to be a part of that. Sometimes those are great blessings.”

The Norrises met a couple from Poland who were visiting during the Farm Progress Show. They talked about living in a forest in their country versus the prairie where the Norrises lived. The two men talked about a shared interest in home brewing. “It was such a fun evening,” Aissa said. “We do that a lot. You build friendships with people you think are very different from you. But we all have the same worries, the same dreams. It makes it a nice place to be.”

Some visitors are interested in local sites like Lake Decatur, the Devon Lakeshore Amphitheater, parks and nature preserves. Often they are coming for work at a local business like a power plant or hospital. “They’re away from home and want to feel at home,” Aissa said. “They wander in the kitchen in their bathrobe. It gives them that sense of home you can’t get when you stay at a hotel. That’s hard to duplicate.”

One nurse has stayed at the Norrises’ home so often that she has her children come join her there. “It’s like her second home,” Aissa said. “It’s more like we’ve become relatives.”

The same kinds of connections have developed with the 1912 Farm, as the Norrises have become Facebook friends with many of the couples who married there. Some even return to christen their babies there. “That’s kind of a cool experience for somebody to invite you into their lives like that,” Aissa said.

In fact, the Norrises become so comfortable with regulars that they have had some guests they knew watch the house for them and let the dog out while they were gone out of town. “It’s nice to know with as much negativity as we see in the media today that most people are kind and gentle and trustworthy,” Aissa said. “We, as a society, always highlight the negative and are prepared for the worst. We just don’t have those experiences. I don’t want to spend my time worrying about what could go wrong.”

Aissa, a retired school administrator who now substitute teaches, admitted it can be challenging because of the speed with which she has to transform the facility from a Saturday wedding venue into an Airbnb in time for Monday guests. There are also 6.5 acres to maintain, and Aissa is fighting a chronic terminal illness. Sundays are often a blur of washing sheets, cleaning bathrooms and baking fresh bread. But Aissa does sometimes “put it on pause” if she needs to. Frequent visitors know they’re still welcome, though. “With the regulars, we don’t have to perform for them,” she said.

Airbnb has a new offering called Airbnb Experience in which locales build in an experience for their guests. Because Hank is a home brewer, the Norrises are considering offering a class and having visitors learn about the equipment in their barn. The Norrises also offer their farm on a website called Hipcamp that lets people camp in various environments. Although they don’t advertise it on Airbnb, they have a guest suite with a brass bed in their barn for those who don’t mind the possibility of bats flying overhead or hearing coyotes at night. “It’s a whole different experience,” Aissa said. “We can’t guarantee they won’t get a visit from a raccoon or possum during the night. It’s something that is pretty unique. We’ve talked about trying to design some kind of experience around that.”

The character of their home changes somewhat during the season, with it becoming more “cuddly and comfortable” in the winter, according to Aissa. There are three huge bay windows in the kitchen, living room and dining room where visitors enjoy curling up with a book and watching it snow. “We put on the fireplace at night and slow the pace,” she said.

In the winter, the Norrises offer more home-baked goods. “We do wine and cheese in the evening when they come in,” Aissa said. “It’s not a cottage or a log cabin, but we try to give that rustic, homey feeling without having to travel to the Catskills.”

In the spring and summer, visitors often want to hike at places like the Rock Springs Nature Center in Decatur, attend the state fair, watch a concert at the Devon Lakeshore Amphitheater or go on a Route 66 tour. “They’re active and going and want to know what’s out there,” Aissa said.

The Norrises have more out-of-state guests than in-state. In the summer it tends to be families and groups traveling from one location to another.

International visitors are sometimes drawn by Central Illinois’ agricultural industry or by politics in Springfield. “We steer people to unique places for them to remember,” she said.

Aissa said that her home is not unusually elegant or elaborate. “It’s nothing fancy or out of the ordinary,” she said. “But we are a unique setting.”

Kari Beckett grew up with an interest in interior design, watching her mother work her magic on their rural home between Tolono and Philo. 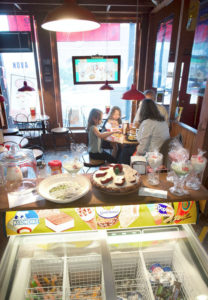