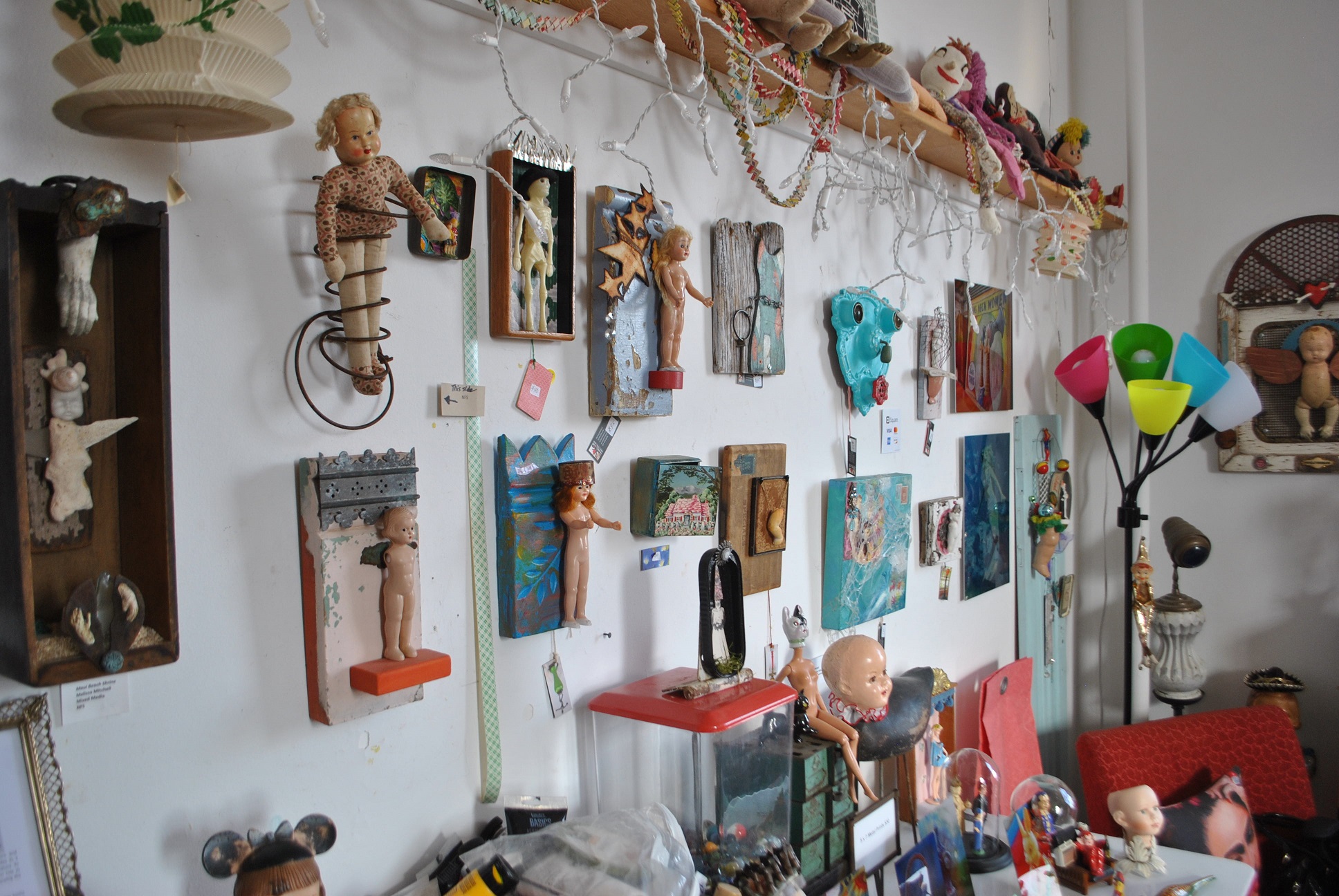 Uncovering the extraordinary … and discovering quirkiness

Melissa Mitchell has a photo album of what she thinks are her first photos, square black-and-white prints dated 1970, making her about 13 at the time.

Melissa Mitchell has a photo album of what she thinks are her first photos, square black-and-white prints dated 1970, making her about 13 at the time. The subjects: Her beagle, poodle, brothers and miscellaneous friends. “Basically anything and everyone in my path was fair game,” she said. “Not much has changed there!”

The Champaign assemblage artist and photographer’s first camera was a box camera; her first “real” camera was an OIympus OM-1, circa 1981. “I recall being quite earnest about splurging on such an expenditure,” she said. “Well before the purchase, I would head out into the country on shoots with my Kodak pocket Instamatic to test my skills and general interest. I didn’t want to spend a bunch of money on a camera if I determined myself to be a lousy photographer or wasn’t able to stick with it. Apparently I passed both tests because I’m still at it!”

Mitchell’s main camera now is an Olympus OM-D, operating like a standard DSLR but with mirrorless technology. “It has a light, compact camera body and a retro design that echoes the old OM-1 styling of my original (analog) camera,” she said. “When people see the OM-D, they often ask if it’s a film camera.”

Mitchell describes her creative style as quirky, offbeat and spontaneous and not unlike stream-of-consciousness-style writing. “With my assemblage art, I start with materials that speak to me and beg to come together, and from there, I just keep building … letting things flow until something materializes,” she said. “I suppose my photography takes a similar path.”

Mitchell heads out with my camera — sometimes only as far as her back yard — and waits until something catches her eye. “I’m constantly amazed that I’ve easily shot every square inch of back yard in the 20 years I’ve lived in the same place … maybe the same variety of flowers, say morning glories … or the same repurposed garden sculpture made from a vintage lamp, with rust tinged crystals … yet year after year, I manage to come up with a fresh image,” she said.

ACME Elfworks is Mitchell’s studio where she makes her assemblage art. The ACME name is a nod to the film noir feel of the Lincoln Building where the studio is located. “When I work there into the night, I often expect to bump into the Prairie Home Companion Guy Noir detective character in the hallway,” she said. “I’m not sure where the Elfworks part came from; the full name emerged through a brain-storming session with friends. The result was sort of accidental branding. People give me elves of all kinds, and they’ve taken on a life of their own in my marketing efforts.”

In 2017, Mitchell began renting a small studio adjacent to hers, which she calls ACME Elfworks ArtSpace. It functions as a “flexspace,” where she hosts occasional workshops and curated group shows with other artists from Central Illinois and elsewhere.

Mitchell advises other photographers to carry their cameras at all times. “I NEVER go anywhere without some ability to capture THE shot, which inevitably will materialize,” she said. “There’s nothing worse than seeing a great image right in front of your eyes but not having the ability to grab it.”

Mitchell says even a device like her iPhone can suffice. “With it, I could do nearly everything I could with a DSLR, except change lenses,” she said.

People often can’t tell the difference between the final edited images taken with that or her Olympus or the Nikon she shares with her partner.

The light and the view initially drew Mitchell to her studio space. “I can see the east edge of downtown Champaign, Midtown and Campustown from the tall, wide east window and have an amazing view of the sun setting behind the Champaign city building from the southwest window,” she said. “The icing on the cake is in-suite access to a mini kitchen area with running water and extra storage. The cherry on top is the building itself and the entire community of folks who inhabit it. We all LOVE the Lincoln Building.”

The Lincoln Building dates back to 1916 and is on the National Register of Historic Places. “It is an important structure in the commercial history of downtown Champaign,” Mitchell said. “Despite being more than a century old, it retains many wonderful, original architectural features, including some period lighting, iron stair railings, transom windows and terrazzo floors.”

Mitchell is working on a curated group show called Women in Their Gardens (AND Their Gardens) that will open April 3 at ACME Elfworks ArtSpace during the Boneyard Arts Festival. The show will focus mainly on photographic portraits of women who are passionate about gardening and will include additional images of details of their gardens. Mitchell and photographers Darrell Hoemann, Della Perrone, Fraya Replinger and Paul Schanbacher Jr. photographed the women last summer. “I’m really excited about the project since it will debut in the spring, which is prime time for those of us who love gardening to start getting our hands dirty again after the long winter,” Mitchell said. “What’s also cool about the exhibition is that it will include women of all ages and experience levels who are drawn to gardening for all kinds of reasons. The show also will include paintings and mixed media work – focused on generic women in gardens – by other area artists.”

Although her next show features portraits, Mitchell doesn’t consider herself a portrait photographer. Friends often use photos she’s shot of them as their social media profile images, but inanimate objects are her go-to subject. “The exception would be cats,” she said. “I would go so far as to say that’s something of a specialty for me. I’ve been taking photos of cats for about 40 years. And since I’ve had black cats for many of those 40 years, that’s become a sub-genre specialty. It’s taken years to perfect the art of shooting black cats – it’s not easy!”

A dream assignment for Mitchell would be 72-year-old musician Emmylou Harris. “I’ve taken many photos of her at concerts through the years,” she said. “She has always been so beautiful, but as she has aged, I find that she somehow, magically, mysteriously becomes more stunning with each passing year.”

Mitchell sees her photography as more of a smorgasbord than a dish. “Looking through my files, I shoot it all: People, places and things,” she said. “I guess I’m what you might call a noun photographer! My favorite subjects tend to be nature (most notably flowers), animals, inanimate objects and still lifes, people. I’m drawn to rust and patina, often incorporating rusty old objects into my assemblage art, but sometimes I also am inspired to shoot arty images of my actual artwork.”

Mitchell is drawn to everyday objects and scenes, drawing attention to them through unusual angles, perspectives, composition or lighting or by juxtaposing them with her assemblage art. “I used to like to say that I’m inspired to seek out and draw attention to the extraordinary in the ordinary,” she said.

Mitchell likes to shoot both “built” and “found” photos, although she estimates about 80 percent of her photos showcase something she’s come across at home, in gardens, in the studio, on the street, in nature or going about her day. “I have been known to move things around a bit after stumbling upon them, doing a bit of styling to get the composition just right,” she said. “And that’s OK because it’s not photojournalism or photorealism! When it comes to art photography, I definitely have that creative license to drive the vehicle.”

Mitchell hasn’t had much time to enter outside juried competitions lately because she’s been so focused on the shows she curates at ACME Elfworks ArtSpace. Last October, she did a Halloween-themed show called “Haunted,” featuring art by locals and other artists from as far as Hawaii. Mitchell was also a main organizer for the new downtown Champaign Fourth Friday Art Walk that a couple of Lincoln Building artists beta-tested from August through November. “So when there wasn’t another show in the artspace, I would put together a mini themed show in that space featuring my own work each month,” she said. “We’re hoping to be able to get the art walk started up again in late spring/early summer, once a month when the Friday Night Live music series begins again in 2020.”

Mitchell wrote about art and health sciences for the University of Illinois News Bureau for 30 years. “In general, because I’ve worked and identified as a writer almost all of my adult life, my assemblage art – and sometimes my photography – does tend to have a narrative quality,” she said. “I view my role as a director, a producer or a master of ceremonies, assembling a cast of characters, setting a scene and setting up a story. But then it’s up to the viewer to decide where the story goes from there. And actually, I think that’s not at all an uncommon role for a visual artist.”

One of Mitchell’s photographs is featured in Busey Bank’s 1868 Collection at the downtown Urbana banking center. Her blank photo cards are sometimes available at downtown Urbana’s Bohemia. She occasionally does pop-up shows with other local artists, including the annual Hooey Holiday Home Show in December and a traveling backyard pop-up show in June with other, mostly Champaign-Urbana artists.

In the past, Mitchell has sold her work at local gallery-style shops and businesses including Vintage Karma and The Vault in Tuscola, The Art Farm in Decatur and the now-defunct Wind, Water and Light in Urbana and Art and Invention Gallery in East Nashville, Tenn.

In the past, Mitchell’s photographs have been featured as 40 North’s Boneyard Arts Festival signature image on billboards and other marketing material, on Champaign-Urbana billboards as a 40 North Sky Gallery winner and on MTD buses as part of a joint 40 North/MTD program. Her assemblage art has been included in juried and invited shows locally and throughout the U.S., from New Jersey to Hawaii, and twice has been juried into and received an award at the prestigious Recycle Santa Fe art festival exhibition.