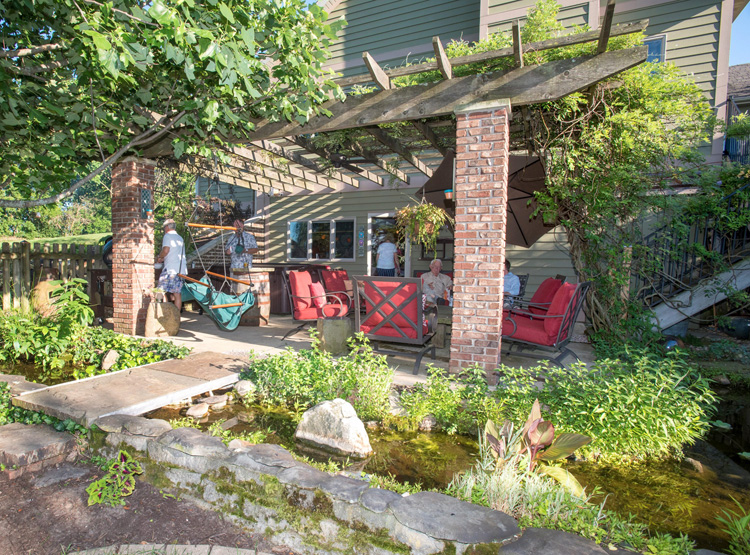 Homes: What lies below? A whisky tasting room basement

What lies below? A whisky tasting room basement

Sometimes you want to go where everyone knows your name to watch the big game or to just have a feeling of acceptance, much like the television show “Cheers.” Guests at Brad and Ginger Passalacqua’s in-home bar and tasting room don’t need to trek to that famous Boston bar to receive a warm welcome. Look no further than this space to make you want to add one of these party rooms at your residence now.

They decided to finish the 2,000-square-foot basement later, at their convenience. “When we finished the house, this was wide open,” Brad said.

When the Passalacquas built the house, they were living in Champaign. Brad, his family and his friends labored day and night to build his dream home in only four months. His aunts often fed the crew members, some of whom were people Brad had helped in the past. “All those favors came back to me,” Brad said. “I had people putting up siding and painting who had never done that before.”

Brad, who is the owner of Dick Butler Roofing, drew on his professional experience when building the home and finishing the basement. “Being a contractor, I’ve seen every possible mistake for 30 years,” he said.

Their first event was a big party catered by Dos Reales cooks, complete with a piñata hanging from a support beam. “As I finished it, the bar evolved into a fun space,” Brad said.

A steady crowd began to build for a standing happy hour almost every Friday. “We’ve been doing this so long, I get text messages Wednesday asking, ‘Are you guys open Friday?’” Brad said.

The rest of the house is bright and white with pops of color and some displays of Ginger’s artwork. His wife had more influence over the interior design in the main house, so Brad made the basement his own enterprise. “It was my space, and upstairs was Ginger’s,” Brad said. “I have the basement and garage.”

In 2010, a friend dubbed the bar the “Duncan Road Country Club,” and the name stuck. Another friend created a logo featuring an animated ground squirrel – a ubiquitous sight around the

Passalacquas’ property — smoking a cigar, drinking a martini and shooting a gun. The

Passalacquas held a contest among their friends to name the mascot, and the name Dirty Randy won. The logo has appeared on glasses, a decanter, a bottle stopper and T-shirts.

County Humane Society. The couple also auctioned off a party for 20 at the DRCC for the

Humane Society’s Fur Ball and raised $2,000 for the organization.

The Passalacquas regret that they have not kept a guest book because they have hosted people from various countries at the DRCC. The guest list usually includes neighbors, veterinarians from the University of Illinois Veterinary Teaching Hospital where Ginger works and Butler Roofing customers. The DRCC has even been the site of a wedding.

Although they call the bar a whisky tasting room, the Passalacquas have occasionally served craft beers brought in from Triptych Brewing and Koerner Distributor. And one of the Passalacquas’

specialties is a fruit syrup they make from combining berries with cassis, a blackcurrant syrup.

Brad said, indicating an extensive collection of bottles behind the bar.

Many of those bottles have been gifts. “Nobody comes in here empty-handed; they always bring stuff in from their trips,” Brad said.

It took four people to carry in a wood-burning stove that Brad acquired. “I knew we were going to build this house, and it would be awesome in the basement,” he said.

Brad shares building space with Cox Masonry, and a friend who works there offered to create the brick nook behind the stove. He also did brickwork on the bar and supporting the pergola over the patio. Brad painted some of the other concrete basement walls to look like brick. “We didn’t have this huge budget to do these outlandish things,” Ginger said.

The bar cabinets were a floor display model from Kitchen-Bath & Cabinet Co. in

Champaign. Under the bar is storage and a dishwasher that comes in handy for cleaning the many glasses dirtied over the course of an evening.

The bar itself was built using leftover two-by-fours from the home’s construction. The top is copper flashing used in roofing. The trim is leftover material from siding the house. Various cigar labels decorate the top of the bar.

The DRCC is on its second set of furniture; at one time, it had a pinball machine and lighter-colored furniture. “I said, ‘This needs to be darker, heavier and more masculine,’” Brad said.

Rich wood planks decorate one wall of the bar, in homage to the log cabin-style home the

Passalacquas considered building. A corner wooden cabinet conceals the components for the projector and plumbing, a distinction that previous belonged to a hollow horse wall ornament gifted from the Dos Reales. Wall photos and comfortable pillows on the couches and leather chairs lend a warmer feeling to the room. In the sitting area, a big projector screen drops down from the ceiling and is typically used during watch parties for major sporting events.

“We just wanted it to be warm and comfortable because it’s chilly a lot,” Ginger said. “We couldn’t afford to do everything at once, so we had to do it as a process.”

Even when the Passalacquas are hosting holiday celebrations like Thanksgiving, everybody usually gravitates to the basement bar. “There are so many places to sit,” Brad said.

The Passalacquas’ tongue-in-cheek humor permeates the space, such as a wooden sign over the door declaring “We can’t miss you unless you leave!”

Ginger enjoys snapping Friday happy hour group selfies and has developed a blanket featuring some of the photos and the DRCC logo.

The Passalacquas made the most of their sloping lot by creating a unique indoor/outdoor space with their walkout basement. Outside, a water garden is just behind the patio, and a pergola with a ceiling fan and lights hangs over the patio. Upholstered red chairs surround a rustic table.

Also outside is a hot tub that Brad uses four or five times a week, even in the winter. A restoration prairie, inspired by the one at Urbana’s Meadowbrook Park, lays on the far edge of the property.

The bar also has a frozen drink machine that brings out guests’ creativity. “Sometimes they’ll bring a leftover dessert, and we figure out how to make it into a drink,” Brad said.

The Passalacquas’ energetic and playful dogs, Auggie and Chip, provide guests with much entertainment. Chet, who enjoys taking a dip in the pond, often lures visitors into playing ball with him.

Ginger’s favorite gatherings are when it’s warm enough to be outside on the patio. “We get great sunsets off of the deck,” she said.

After people visit the bar for the first time, they typically thank the Passalacquas for opening their home to them and remark about the space. “We get so many compliments,” Brad said. “It’s more just an entertainment space that happens to have a lot of liquor in it. We probably cook more than we make drinks.”

The Passalacquas’ house attracts admiration even from strangers. Once a University of Illinois police officer came to the door and shared that he was interested in building a similar home. He and his wife came to some DRCC gatherings, and Brad eventually gave the officer the house’s blueprints, which he used to build a home in Minnesota to provide another place where everyone knows your name.