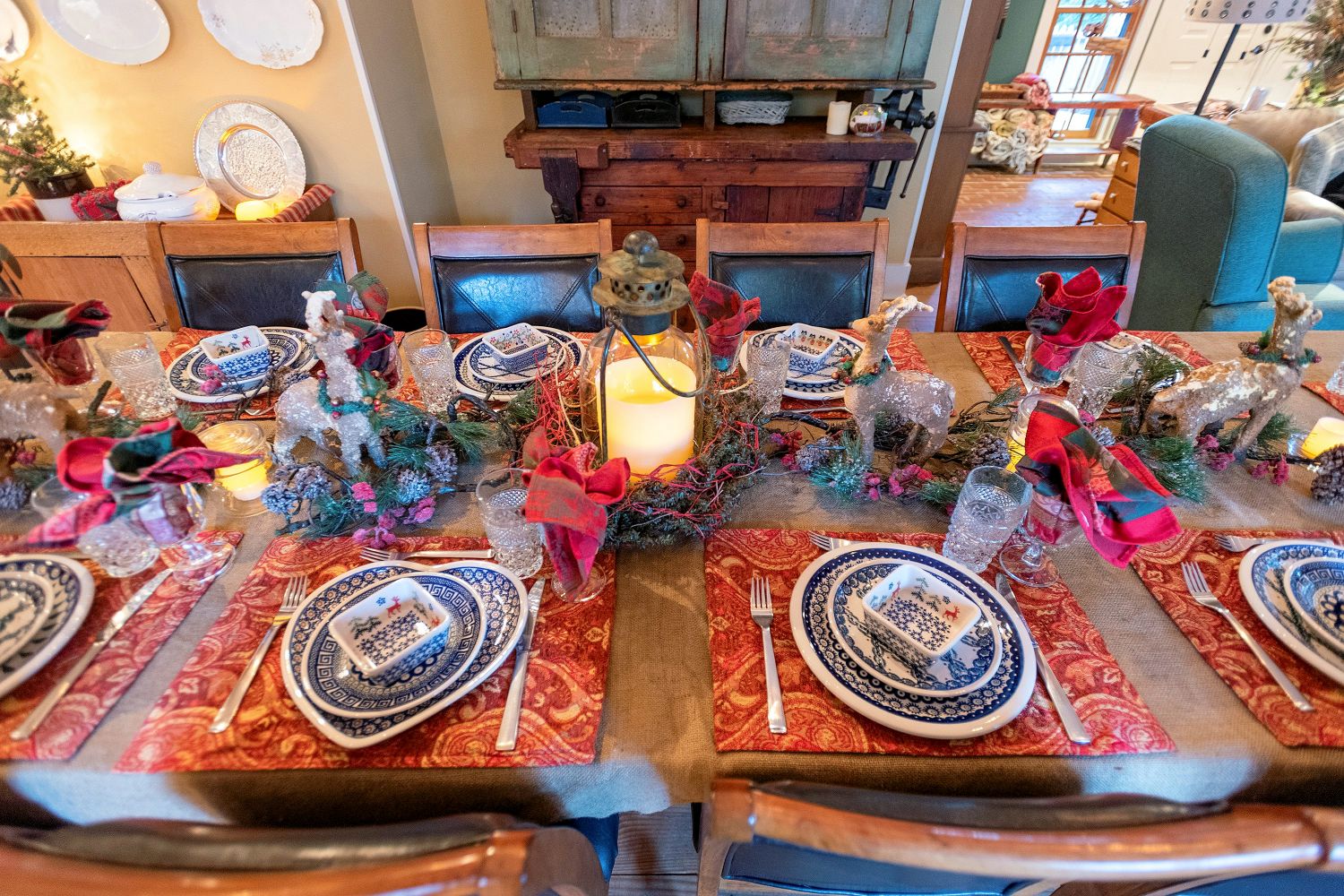 Jim and Betty Gauze love houses. It makes sense – Jim was a homebuilder by trade, and Betty is a Realtor Emeritus. The Gauzes have a collection that they estimate at about 75 miniature houses in various sizes in their home on Champaign’s Georgetown Drive. A neighbor made a number of tiny wooden ones displayed along the kitchen windowsill. “Our house is a house full of houses,” Betty said. “We both love houses.” The Gauzes built their home, which is almost 4,000 square feet on one floor, in 1994. “It’s the only one of its style and kind in Champaign County,” Betty said. “It’s designed to feel old.”

The Gauzes originally had all white walls, but now there are 16 different colors throughout the house. “I’ve never tired of any of them,” Betty said. “I’m not a person who likes to change, change, change. I don’t move things around a lot.”

Betty used a nine-step process to stain the 12-inch-wide pine plank floors throughout the house. “They’ve held up beautifully for all these years,” she said.

The Gauzes didn’t decorate a lot for the first few years. “It took a while to really make it ours,” Betty said.

The house is filled with antiques. “We already had a collection of antiques, so we began to add pieces in every travel we do,” she said. “There’s always room to put another piece. The bigger house, the more you think you need.”

The Gauzes decorate with some touches for each season. They use their home’s unique features as a foundation for their Christmas decorating. “Each room we try to give a different theme,” Betty said. Being in the real estate profession has given Betty a helpful perspective. “I’ve been in so many different homes,” she said. “I pick up ideas of ways I would like to do things.”

Betty said she used to use more decorations but came to a realization: “We don’t need all of this to have the same effect,” she said. ”You need enough to give it the flavor or the feeling of Christmas.”

The Gauzes previously lived in a Queen Anne-style house in Catlin and hired a professional decorator for a few years when they lived there. Betty realized she could build from stock. The Georgetown house has been decorated in red, white and blue. Another year was bears. Still another was outdoors. “We had so much décor,” she said. “I realized I could take bits and pieces and then I adjust ideas to my own taste.” She recommends the process, especially for those who struggle to come up with ideas. “I looked and watched and learned,” Betty said.

She tries to set up a scene that gives a feeling. There are two or three small Christmas trees in most rooms; Betty decides which tree will go in which room by where it will fit the best.

Betty and Jim have a small RV, and Betty said she draws a lot of inspiration through their travels. “We always bring back pieces we think will fit in,” she said. “I do like to go into resale shops. I love the older pieces.”

Betty tries to decorate so that light reflects off of glass, an idea she learned from the decorators, whether it be on mirrors, picture frames or glass containers. “I love that look,” she said. “It gives you the extra glow from the light and candles.”

Betty and Jim usually start decorating on Thanksgiving weekend. It usually takes them about three days, from the start to the cleaning stage. Jim strings lights on the main tree and gets out and puts away many of the decorations. “He’s a great help,” Betty said. “We have real similar taste.”

Betty takes photos after she’s done decorating so she can remember what she did from one year to the next.

The Gauzes have held many parties in their home over their years, with as many as 250 guests at one time. “Often guests say the house should be in magazines,” Betty said. Foreign exchange students and graduate students from around the world, Jim’s niece, as well as Betty’s mother, have lived with them. “We enjoy sharing our home,” Betty said. “We’ve shared it a lot with different groups and causes.”

The Gauzes fell in love with a fireplace in a church basement that they saw on a mission trip to the Appalachians. Betty sketched a picture of it, got home and hired the right mason to come to their house to build a similar one, but larger, brick by brick, in what they call their gathering room. Their guests enjoy “food, fire and conversation,” Betty said. “We love the fireplace,” she said.

An old piano crate serves as the fireplace wood box. Betty likes the dings and gouges on the box that she feels give it character. Jim notes that the lumber is 1.5 inches thick, making the box extremely heavy to carry. “He really appreciates the quality that goes into a piece like that,” Betty said.

Betty uses iron skillets that hang from the mantle to make Dutch boy pancakes that she serves to breakfast guests. The beam that makes up the fireplace mantel came from a barn in Cisco. The Gauzes spent two and a half hours walking through the barn to pick out the beam they liked best; it ended up fitting the fireplace so perfectly that it didn’t have to be adjusted at all. “It meant a lot to us,” Betty said. Some dramatic dangling iron candleholders hanging over the 10-foot dinner table were found in Galena. For Christmas, the room featured an outdoor theme. A milk can tree in the room stays up all year, with the lights turned off after the Christmas season has passed.

One nativity scene in the room came from Germany. Another on the mantel is from Jim’s childhood. The only Christmas decoration she doesn’t store in the room where it’s displayed is the gathering room’s tall Christmas tree. “It’s so much easier to decorate,” Betty said. “With storing in the room, so you don’t have to sort,” Jim added.

The handmade wooden 10-foot table is covered with burlap. “It’s a good color for this time of the year,” Betty said. The table is set with Polish pottery from a trip to Boleslawiec, a town with a long ceramic history. The nearby tree is decorated with ornaments that Betty has found in various places. It’s topped with a star from Prague, as are the other trees in the room.

An antique cabinet in the room displays finds from countries all over the world.

A favorite decoration of Betty’s is two Christmas caroler figures given to her by a dear friend. She places them under a street lamp decoration that stays in the room all year.

Also on display are a number of decorative dashchunds, a tribute to their beloved wirehaired companion, Hannah Grace. Numerous Santas punctuate the rooms too. “A lot of things have been given to us over the years,” Betty said. “People know we collect houses.”

Jim designed everything in the kitchen, including a large hand-wrought pot rack that hangs over an island. A group of traditional Christmas nutcrackers on the kitchen counter can sometimes be seen marching in various locations in the house. The kitchen Christmas tree is decorated with cooking utensils.

The unusual candle lights over the table were found in Mexico. For Christmas, it’s decorated in a less formal, gingerbread theme. “I love this spot,” Betty said. “I think of this more as a kid place, more youthful.”

Betty enjoys photography, and a collection of her pictures hangs on either side of a wide hallway just off of the breakfast area.

Even the laundry room has a wreath, and the bathrooms have some Christmas décor as well. “We sometimes don’t realize what you can do if you really try,” she said.

The living room/parlor has been known as the candy room. Betty is known for serving her homemade sweet treats when entertaining, particularly pies. That room has an old-fashioned theme with its ornaments, pine cones and twisted trees. “I really like this theme,” Betty Gauze said. “I like the more Victorian look of it.”

One of the guest bedrooms has an angel theme that Betty describes as “a little more formal.” Another bedroom is always done in an outdoor theme. “I just like lots of styles,” she said.

There’s an antique tree decorated with deer in a hallway off of the bedrooms. Betty admits that she thought it looked “kind of straggly” when she first spotted it in an antique store but saw its beauty after it was decorated. “I get a lot of comments about the deer tree,” she said.

Outside, the Gauzes have an English garden with rocking chairs that serve as rose trellises in the spring. For Christmas, the home’s exterior is decorated in colorless lights with trees on the front porch. Some years there’s a wagon; others there’s a sled.

Betty is philosophical about her decorating. “There should be something in a room that takes you to a memory,” she said. “You shouldn’t like everything in a room, but you should see something that connects you to your life and your likes.” 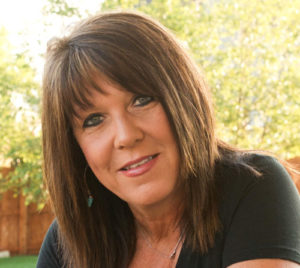