Artist's view: Not your grandmother’s quilts

Not your grandmother’s quilts

Kelly McCleary fondly remembers as a young girl watching her artist mother paint and draw in their Sadorus home.

McCleary herself loved to draw horses as a little girl. As a teenager, she became more interested in music as an artistic expression, playing guitar, piano, drums, bass and trombone. “I’ve always been pretty creative,” she said. “Part of my (artistic) process is I listen to music. That’s huge.

Even if I’m really involved in what I’m doing, I can’t have just silence.”

After majoring in history at Parkland College, she started working, married her Unity High

School sweetheart, Dave, and started having children, who are now 12, 9 and 5. “We’re busy people,” Kelly said. “Art and music fell by the wayside.”

Kelly didn’t know how to sew when she and Dave moved to their Monticello home 12 years ago, but she decided she wanted to make curtains and some bedding. “I wanted a special color combination and print but I couldn’t find it in the store,” she said. “I thought, ‘I’ll try making this.’”

After a “quick crash course” from her mother, Kelly started sewing, first for herself and then to make gifts. “People started saying, ‘Have you thought about selling your work?’” Kelly recalled.

When Dave started going to school full time about five years ago, Kelly decided it made financial sense to start a business as a way of generating some extra family income. And so The Quirky Quiltress was born. “I love it to death,” Kelly said. “But it’s a lot of work. There’s a lot I really like about this. I’m working with my hands, even though what I do is really difficult.”

Kelly chose her business name based on advice from e-commerce website Etsy to use alliteration in a business name. Kelly estimates she produces close to 200 pieces each year, selling her products online and at art markets and fairs, mainly in Illinois.

Kelly works full-time at the University of Illinois. When she gets home, she takes care of the kids, helps them with homework, makes dinner and gets them off to bed. “If I’m not too tired I come out here (to her garage studio) and sew until I have to sleep.”

How long it takes Kelly to create a piece depends on its complexity. “Everything I make is improvised,” she said. “It happens as I go. Design is happening during the piecing process.”

Kelly gestured to a quilt top that she’d been working on for a couple of months. She dyes and batiks the pieces individually. “It could take three hours or it could take six months or a year – it just depends,” she said. “I’d love to get this done. It’s been really slow going.”

“It opened the world of dyeing my own fabrics,” Kelly said.

Eventually Kelly wants to start making her own natural dyes from sources like onion peels and avocados. “You can get some really cool colors,” she said.

Kelly’s favorite color combination is indigo blue with a bright mustard yellow. “I think the way the yellow plays off of the blue; it’s what makes my eyes happy,” Kelly said. “I feel like that’s my signature. But I cover every color that exists.”

Kelly may be inspired by seeing two colors of flowers next to each other, by a coworker’s outfit or by a print she really likes. “A lot of my inspiration comes from color,” Kelly said. “Sometimes

I’m at work, so I grab a Post-it and write it down because otherwise I’ll forget it. By the time I’m making dinner, it’s gone.”

Each piece she cuts out, Kelly, 35, makes a different size. “When I tell someone I’m a quilter, they immediately think of the quilts their grandmothers made from a pattern with specific quilt blocks laid out in a specific and precise way,” she said. “What I do is different. I think what people like about it is, it’s not what they expect. I have potholders that have cicadas on them or lunar moths. They just want to buy it, or they’re drawn to it – sometimes the color combinations.”

When Kelly is making a quilt, she is usually thinking about her next project. “If I think the idea is really good, I’ll stop and work on that,” she said. “Or I’m thinking about things I have to do at work tomorrow.

It’s like therapy for me now at the end of the day to work with my hands and sew. It’s a good distraction from everything happening. Everybody has a hobby or a way to escape.”

Kelly advises new artists starting out not to get frustrated. “Keep going,” she said. “I couldn’t do this without years of practice. Sometimes it’ll turn into something else you didn’t know would happen.”

Kelly considers Miller her mentor and said Miller has taught her about not only art techniques but about running a business and figuring out who her audience is. When Kelly would get frustrated, Miller would remind her, “I’ve got 25 years in this, and you’ve got two months,” Kelly said.

Kelly sees quilting as a skilled trade and an art form and is proud to carry on the tradition. “Not that many people do it anymore,” she said.

Kelly has her grandmother’s old 15-foot quilting loom that she used to create quilts to sell during The Depression. “It’s really neat,” she said. “When I think about the work that goes into it, I feel a connection.”

Kelly can look back at her work and see how it has evolved over the years. “I’m self-taught but

I’ve figured out shortcuts and methods that work for me,” she said. “It’s a lot more refined. I’m more advanced with it.”

People often ask Kelly how she has enough time to produce her work. “I don’t know; I just do it,” she said. “I’m just like any other working mom. It’s all about balance.” 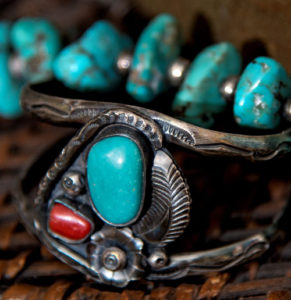 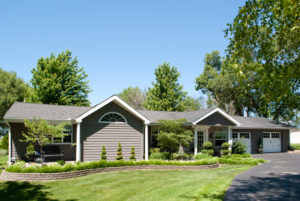