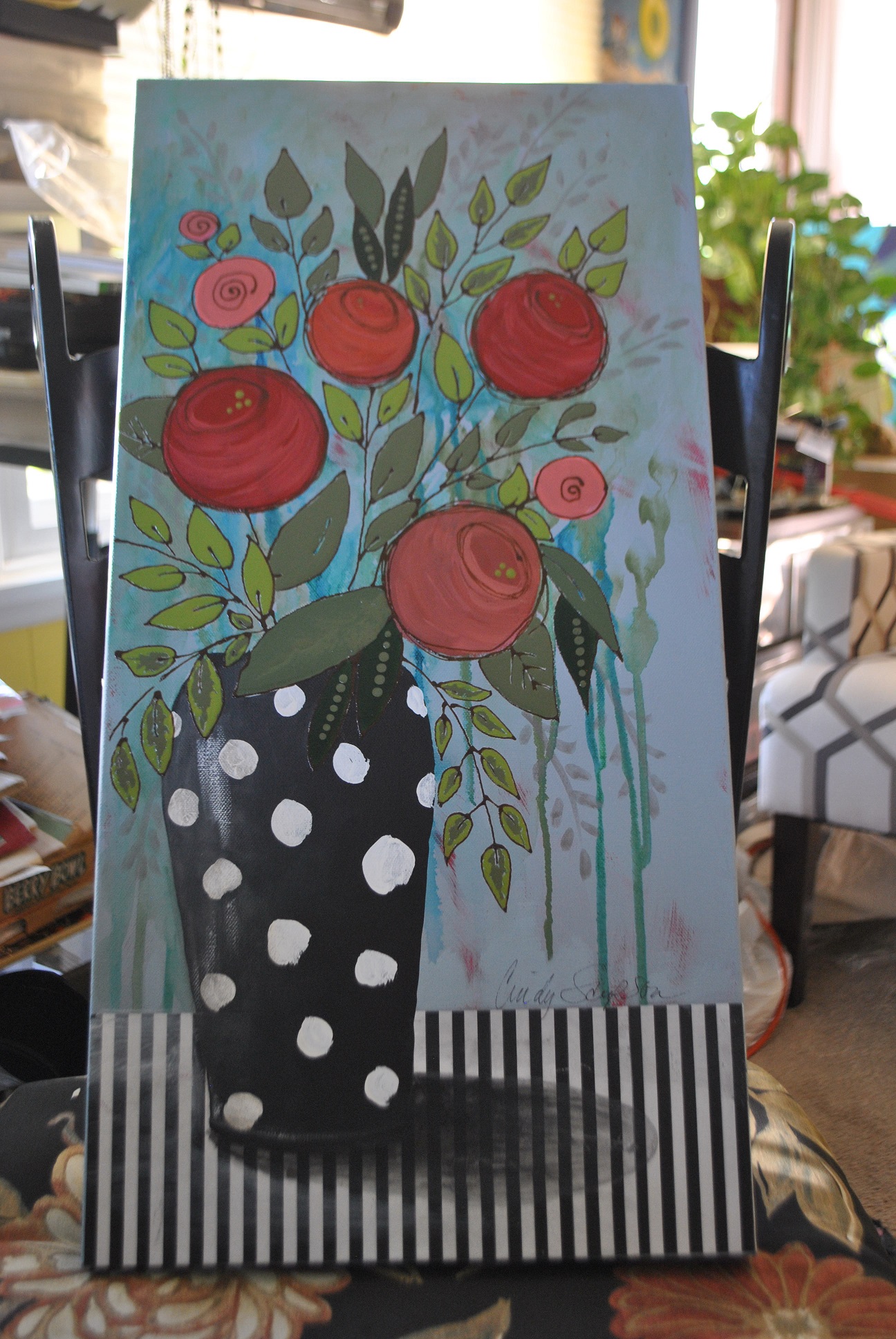 Using her experiences and creating beauty

In the bright and airy plant-lined sunroom at the back of Cindy Sampson’s Champaign house is her studio -- a treasure trove of her many art supplies and more than a few pieces in progress.

In the bright and airy plant-lined sunroom at the back of Cindy Sampson’s Champaign house is her studio — a treasure trove of her many art supplies and more than a few pieces in progress.

Although she has dabbled in everything from clothing and assemblages to jewelry, she’s been doing a lot more painting than sculpture recently. “Lately I’ve been on this gilded kick,” she said. “I have artistic ADHD; my brain is just going constantly. I usually have lots of projects in the works. I like to experiment.”

The Fisher native believes her work is guided by “whatever higher power you believe in.” “I’m a conduit, kind of, I guess,” she said. “I don’t know where it comes from. I feel like I open my mind and let it go.”

Sampson’s interest in art started as a young toddler when she was given paints. “There are pictures of me sitting on people’s laps, painting,” she said.

It was country folk art that first gained Sampson recognition. That artwork has appeared in magazines like Better Homes and Gardens and on television shows like “The King of Queens.” The television show “Room by Room” did an entire episode on her art, using sets of cats that she had done all around a house.

As a commercial artist, she was with a publisher for eight years. Sampson, 57, decided to go out on her own and publish herself under the name Cindy Sampson Studio, using Bopi in Bloomington. She currently uses Dixon Graphics. “When we stopped doing shows, I needed something creative to do,” she said. “I just need a creative outlet. Whatever it be, I just have to have something to do. I do a lot more traditional contemporary than I used to.”

Sampson used to worry about the fact that her artistic styles were so different but has come to terms with that. “When I was trying to get into a show or a gallery, I couldn’t plop down a portfolio and have everything look exactly the same,” she said.

Sampson works four days a week as the manager for Country Fair Self Storage in Champaign and works on her art in her off hours. She has been selling jewelry made from recycled materials at the Market at the Square in Urbana every Saturday from May to December for 15 years. “I needed to support my bead habit,” she joked.

Sampson usually begins a painting with a sketch on tracing paper. It’s not unusual for her to brainstorm other ideas and write them at the bottom as she’s sketching. Sampson sometimes paints words underneath her paintings, creating hidden messages. She also buys old canvases and combines the work with her art, signing both her name and the original artist’s name to the finished piece. “I may take an element out of one (painting) and use it in something else,” she said.

Sampson keeps lots of journals, many of which other people have given her. “I write down ideas as I think of them,” she said. “They’re scattered all over the house.”

Sampson’s work can sometimes be seen in shows around town. For the last three years, she and some other artist friends, Melissa Mitchell, Cammie Meerdink and Jill Miller, have been doing a pop-up show during the first week in June. Sampson was one of 13 artists whose interpretations of Mitchell’s digital photographs were recently featured in an exhibition called “Echoes” at the Lincoln Building in Champaign. Sampson enjoys the camaraderie of other local artists and is part of a group called the Art Nerd Club that meets periodically to critique one another’s work.

After a difficult time in her life, Sampson started doing recycled pieces, “making art out of junk,” she said. Her favorite piece from that time is one she titled “Metamorphosis.” “That was the beginning of the transformation,” she said. “What I did figure out is, my art is my sanity. Traumatic things change who you are. All my good and bad life experiences all get put into this one big pot and stirred up. That’s what makes the art.”

Sampson has started using a technique known as eco dyeing, a process that uses dyes found in nature. She uses red wine vinegar for the dye and then wraps the paper in plastic and steams it. “It comes out with all of these colors and marks,” Sampson explained. “One of my friends had read about it online. One winter day we were bored and decided to try it.”

Sampson has been enjoying working with teabags, another thing that people give her. “I love old magazines – the graphics, the colors,” Sampson said. “Sometimes it’s the fonts.”

Sampson sometimes goes to estate sales and buys old journals to use for her artwork, always trying to be respectful of the person who wrote the words or drew the doodles within. “I use it very sparingly,” she said. “It’s precious.”

The colors for a piece she’s working on now came from a shirt. “So there’s inspiration anywhere,” Sampson said. “I love old books too. I like the graphics in those too.”

One of Sampson’s favorite tools as an artist are her paint trays, which are recycled foam trays used to package meat. She also uses a lot of pencils.

Sampson enjoys going to museums to see artwork up close because the brushstrokes, colors and textures look so different than in photographs. “I’d love to travel and see more art,” she said.

Sampson’s favorite artist is Austrian Gustav Klimt, whose most famous work is a symbolist painting with added silver and gold leaf called “The Kiss.”

“I come at art differently than other people,” Sampson said. “I’ve always tried to sell it to pay the bills and put food on the table. It’s not precious to me. It’s not the end process; its’ the experimenting and playing and creating and letting go that’s what I enjoy. If I could win the lottery, I would give it away.”

Sampson has trouble titling her pieces. “A lot of times I put it online, and people title it for me,” she said. “I like to hear how people interpret it. Usually I’m not consciously thinking of a message. It’s like they’ve got into my head.”

There’s no telling where Sampson’s work may show up. A cousin who lives in England once sent her a photo of one of her pieces in an English pub. She’s even heard about her art being used to barter in Kazakhstan.

Sampson loves it when children engage with her art. “That’s the most flattering,” she said. 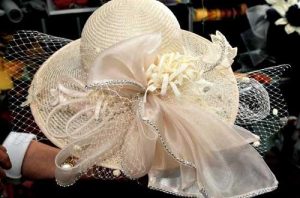 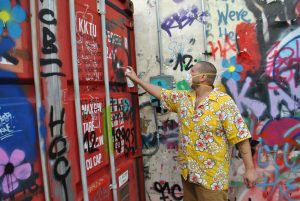 Bringing the humor and creating joy

Originally from Ohio, Marc-Anthony Macon earned his degree in theater and rheto­ric from the University of Illinois.