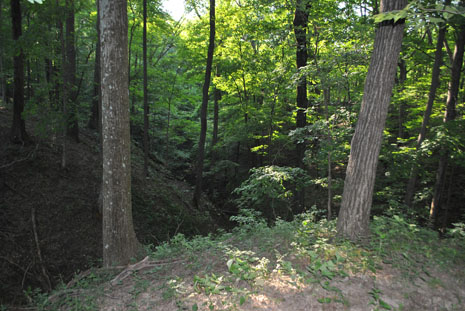 Venture just an hour south of Champaign-Urbana and you probably wouldn’t expect to see breathtaking views of rolling ravines that look like something you would might find in the hills of Tennessee.

Venture just an hour south of Champaign-Urbana and you probably wouldn’t expect to see breathtaking views of rolling ravines that look like something you would might find in the hills of Tennessee.

For those unfamiliar with Warbler Ridge Conservation Area just south of Charleston, the spectacular scenery that awaits you there provides just such a surprise.

The area is the showpiece of Grand Prairie Friends, a nonprofit land trust organization with a mission to preserve natural areas in east-central Illinois. GPF is perhaps best known for its fundraisers, a native plant sale in May or the Rattlesnake Master Run for the Prairie each November, both in Urbana.

The group’s origins go back to 1984 when some concerned citizens decided they wanted to acquire, preserve and restore tallgrass prairie in East Central Illinois. Since that time, the group has purchased several original prairie remnants varying in size from 1 to 14 acres that have never been plowed — typically along railroad tracks and in cemeteries — in Champaign, Vermilion, Ford and Iroquois counties.

GPF executive director Sarah Livesay notes that North American tallgrass prairie is an ecosystem that is more imperiled than the Amazon rainforest. Because of that, over 18 different groups – some from other states – have applied to do research on GPF lands.

From its grassroots origins, Grand Prairie Friends has become a 501c3 led by a volunteer board of directors. In 2011, Grand Prairie Friends began to raise money to buy over 130 acres of Coles County forest. The land was located along the Embarras River, south of the City of Charleston-owned Woodyard Conservation Area and north of Fox Ridge State Park. GPF saw an opportunity for what is known as landscape-scale conservation, a holistic approach to conservation that is focused on preserving contiguous corridors of land. These connected areas, especially along waterways, all the continuous habitat areas needed for plants and animals. By 2018, GPF ended up buying 1,000 acres. GPF is now missing only one piece of land to have a completely contiguous corridor, its long-term goal. “As a land trust, we get opportunities when land becomes available,” Livesay said. “It’s an intentional approach for us to connect habitat areas along the Embarras River.”

GPF is not a governmental entity; all of the funding it uses to purchase land comes from grants and donations. “Grants are one of the most important pieces that help us acquire and preserve these lands,” Livesay said.

The organization is then left with the responsibility of stewarding all of that land in perpetuity. “When we take on that parcel, we now have the obligation to be good stewards for the land and the community,” Livesay said.

GPF has added three new parcels in the last six months. Most recently, grant support from the Illinois Clean Energy Community Foundation and The Lumpkin Family Foundation allowed GPF to add a series of about 6 miles of trails through the property. In addition, GPF restored wetlands, planted pollinator gardens and thousands of trees.

Because it is protected land, there are rules like no ATVs or horses at Warbler Ridge.

One idea that has been discussed for the future is controlled hunting for deer management, partially to protect GPF’s investment in the trees on the property. “There’s lots of reasons for managed hunting programs on conservation land,” Livesay said.

There are no immediate plans for that, however. “We’re always striving to do whatever is best for the land,” Livesay said. “Whatever the land is best suited for is what we want to do.”

Some of the lands that GPF buys are in agriculture. The properties are enrolled in the USDA’s Conservation Reserve Program, and sometimes they are later taken out of production for other restoration activities.

Livesay said a common misconception is that GPF’s land is taken off of the tax rolls. Livesay said that for most of their properties, the organization chooses to voluntarily pay property taxes.

GPF is a member of the Prairie State Conservation Coalition, a coalition of 30 land trusts from across Illinois. While some land trusts don’t open their properties to the public, all GPF sites are open from dawn to dusk at no charge. “We hope more than anything that we’re building future stewards by allowing access to the natural areas we preserve and restore,” Livesay said.

For some people, being a conservation steward could mean recycling, while for others it might mean becoming a donor or giving volunteer hours to do things like pick up litter. GPF has a team called The Champions who do a variety of tasks like removing invasive species, improving trails, collecting seeds and planting native species. The public is invited out on special stewardship days. “We’re always looking for volunteers,” Livesay said.

The Illinois Nature Preserves Commission has designations for land and water reserves as well as for natural heritage landmarks.

GPF has a team of experts who advise the organization’s leaders on conservation and help keep them up to date on ever-changing practices.

GPF also has mitigation opportunities. For example, the U.S. Fish and Wildlife Service recently named GPF as a mitigation partner to receive funding from Apex Clean Energy to put funding toward a project that would offset the wildlife impacts – specifically on bats — of a wind project. GPF is currently undertaking a bat habitat restoration project that involves creating new areas of forest for two species, the threatened Northern Long-Eared Bat and the endangered Indiana Bat, both of which have been found on the Warbler Ridge property. Researchers from the University of Illinois, Eastern Illinois University and the Illinois Bat Conservation Program discovered a lactating female Indiana Bat just adjacent to the property. “This is huge for a federally endangered species,” Livesay said.

Over the next five to seven years, the area will be restored to trees, and artificial bat habitat boxes and structures will be added. As soon as harvest was over, work began to outfit 25-foot-tall power poles with artificial bark called BrandenBark, developed by Kentucky firm Copperhead Consulting, to simulate trees. “It’s a really new innovation,” Livesay said. “I think a lot of people are curious.”

Ameren volunteered to “plant” all of the poles in the ground. “They’re just a great community partner,” Livesay said.

There will be four pods, each with three structures inside of it. Multiple structures are needed as bats switch roosts to avoid predators. A 3-acre wetland is going to be built in a field depression, a cover crop is going to be planted to stabilize the soil, and then a 10-acre swath of trees will be planted.

The research that Davis’ team conducted before the restoration project provided baseline data on the bats and revealed that of Illinois’ 13 bat species, nine live at Warbler Ridge. “That’s awesome,” Livesay said. “We have a perfect opportunity to make a maternity roosting site.”

The team set up acoustic monitoring stations to better understand the distribution, relative abundance and migratory patterns of bat species in different habitat types and set up mist nets to capture the bats for banding. The team also collected excrement, or guano, to better understand what the bats are eating. This could have implications for agriculture, as bats eat many of the insects that damage crops.

GPF is putting out “rocket box” bat houses that will be mounted on 20-foot-tall poles in the corner of the property at Warbler Ridge this fall as an additional way to improve conditions for the bats.

A fungal infection, white-nose syndrome, that kills bats during hibernation, has devastated the North American population for about the last five years. “We know we’re seeing less and less on the landscape,” Davis said.

The research will help to find how bat habitats could be better managed as well as what changes from the activities at Warbler Ridge will have on the bat population.

The bat researchers will be publishing scientific manuscripts on their findings. “It’s taking this data and delivering it not only to managers but to the general population,” Davis said. “A lot of people are scared of bats, so if we can show their value, it will make an impact.” 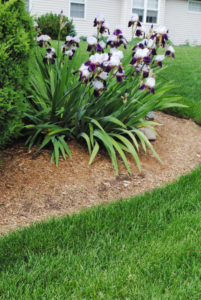 Lawncare takes a lot of work. Learn how Phil Lovett does it. 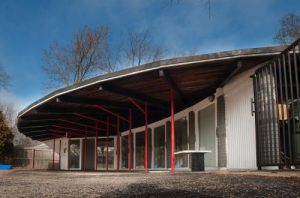