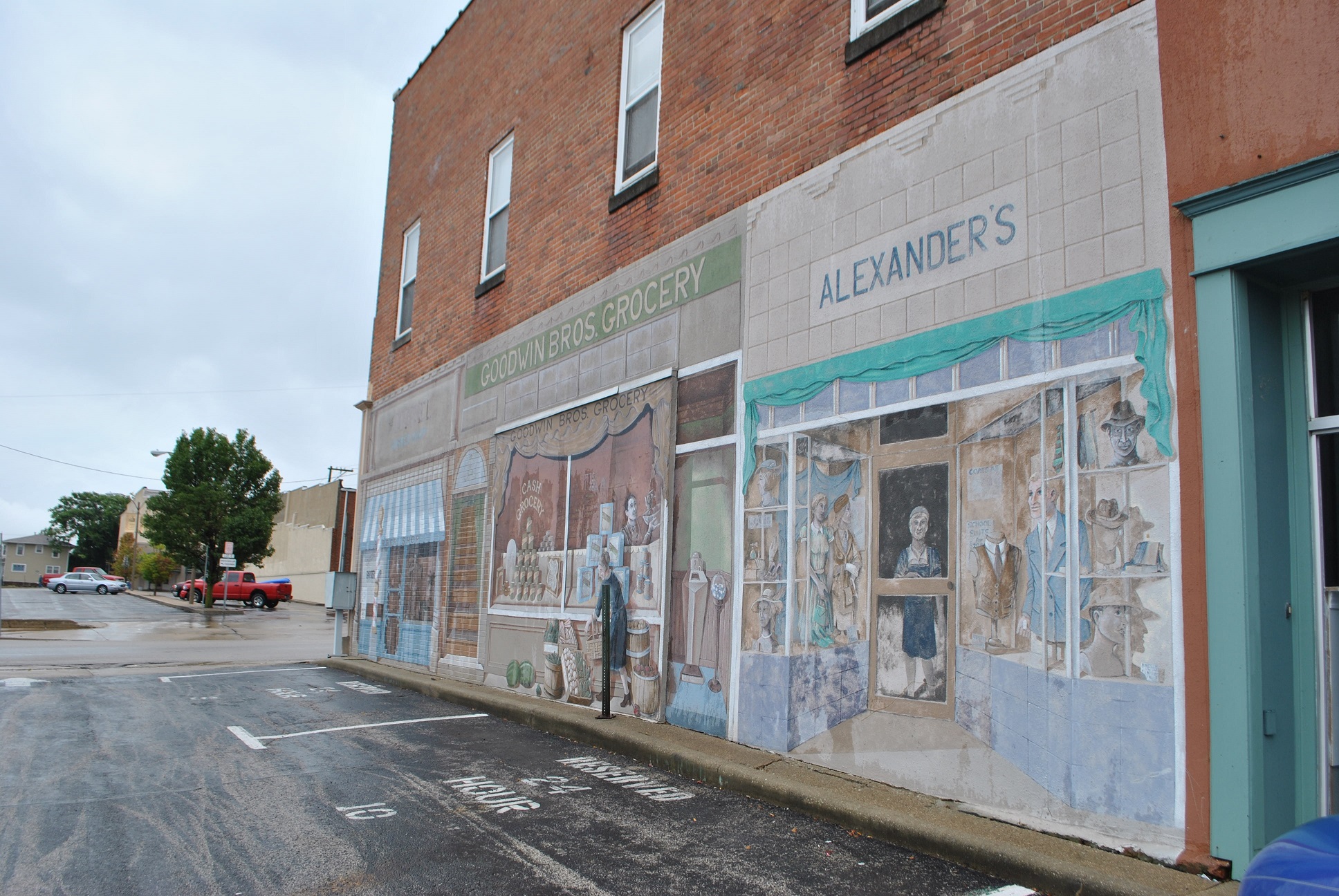 Whether you enjoy culture, festivals, history or nature, Charleston has something for you.

Whether you enjoy culture, festivals, history or nature, Charleston has something for you. From Champaign it’s about an hour’s drive as you take Interstate 57 south, get off at Exit 192 and take Illinois 130 east.

EIU’s Tarble Arts Center showcases visual arts. Its permanent collection includes Illinois folk art and contemporary art. Along with exhibits, there are outdoor sculptures and a gift shop, and it hosts classes and lectures.

There are seven murals around Charleston’s downtown square, painted in 1998. “They’re representations of different things from the city’s culture and past,” Pamperin said.

There are occasionally tours of the underground tunnel system from the Coles County courthouse to the jail. “It was originally a steam tunnel, and now they use it to transport prisoners in the winter, especially,” Ratliff said. “They used to do a lot of school tours in it.”

The 5,400-seat Lantz Arena is home to EIU basketball and volleyball. Within the same complex is Lantz Indoor Fieldhouse, home of Panther indoor track and field and the indoor practice facility for all teams.  Also in the complex is Ray Padovan Pool, home to EIU swimming. The 10,000-seat O’Brien Field hosts Panther football and outdoor track.

Each spring, EIU and Charleston host an outdoor festival called Celebration: A Festival of the Arts that includes a weekend of live music, festival-style foods and an art fair with everything from blacksmithing to watercolor. EIU’s Family Weekend typically features a concert, and homecoming week includes activities like an all-you-can-eat breakfast, 2.5-kilometer race, parade and football game.

June’s Tour de Charleston lets bike enthusiasts tour the city on 12.5-, 25- and 50-mile rides. Last year over 250 bicyclists rode in the event that starts and ends downtown. Next year, Charleston will be one of the host cities for Ride Illinois’ Grand Illinois Bike Tour, in which 25 states were represented last year. “Charleston is becoming a biking destination,” Pamperin said. “We are really trying to expand those offerings because we are a college community.”

Abraham Lincoln traveled to Charleston as he rode the Circuit of the Eighth Judicial District from 1847 to 1857. “Lincoln in Charleston is a pretty big deal,” Pamperin said.

The Lincoln Douglas Debate Museum is Illinois’ only museum that depicts all Lincoln versus Stephen Douglas debates through film, audio selections, artifacts and photos. It’s open to the public from 9 a.m. to 4 p.m. seven days a week for self-guided tours.

The Lincoln Log Cabin Historic Site was the 1840s home of the 16th president’s father and stepmother, Thomas and Sarah Bush Lincoln. “He spent a lot of time visiting his family,” Pamperin said, adding that Abe Lincoln was 21 the first time. “He had a lot of family and friends in Charleston. He spent time here as a president-elect, literally right before he went to Washington, D.C.”

Lincoln visited his stepsister, Matilda Moore, at her home southwest of Charleston Jan. 31, 1861, on his final visit to Coles County before leaving by train for his inauguration. “It was in his heart,” Pamperin said.

Charleston is one of the six official Gateway Communities designated by Looking for Lincoln Heritage Coalition. The Abraham Lincoln National Heritage Area partners with the National Park Service and its Passport to Your National Parks program, and the Charleston City Hall is one of the venues where visitors can record their visits to NPS sites by stamping their passport with a rubber cancellation stamp. “It shows how important Lincoln’s time in Charleston was,” Pamperin said. “Charleston is visited a lot by history and Lincoln buffs.”

Visitors often come from nearby states like Indiana and Ohio, and some have come from as far as Shanghai. Sirius-XM Radio personality Gordon “Phlash” Phelps has even made reference to Charleston.

“It just kind of shows people gravitate to Charleston and see the Lincoln sites here in town,” Pamperin said.

One of the most famous cases Lincoln tried in Charleston was one in which he assisted in prosecuting slave owner Robert Matson’s case against two Coles County abolitionists, Dr. Hiram Rutherford and Gideon Ashmore, who took Matson’s slaves to press the issue of slavery.

Three years ago, Charleston hosted a re-enactment of the Charleston Riot of 1864 on the square. The riot happened after Union soldiers and local Republicans got into a gunfight with local insurgents known as Copperheads, a faction of northern Democrats who opposed the Civil War; nine were killed, and 12 were injured. Lincoln ordered the release of 15 instigators who were imprisoned for seven months after being captured. “There was a little bit of a North vs. South thing here,” Pamperin said. “The city was deeply divided. Charleston is definitely rooted in some Civil War history.”

In 2017, the City of Charleston received the Governor’s Hometown Award for its trail system, the product of a meeting four years earlier by a group of local bicycle enthusiasts to brainstorm ways to upgrade the lake’s trail system. In early 2014, the system was comprised of about 2 miles of single-track trails around the lake. With the help of private partners, a group of volunteers and public works employees started improving the trails and hand-building more single-track trails around the lake.

There are about 9 miles of walking/hiking/biking trail along Lake Charleston with five trailheads where people can enter. “There’s something for all skill levels,” Pamperin said. “You have to travel a distance to find the quality of trails we have.”

For those who like an adrenaline rush, the west side’s trail is more challenging, with steep grades. “These aren’t flat prairie trails,” Pamperin promised.

For those wanting less adventure, the east side has a 9-foot asphalt path accessible by wheelchairs and walkers, and the Embarras River can be seen on the other side. There are four roof structures with benches evenly spaced along the path, where pedestrians can stop and rest.

Plans are in the works to apply rip rap to the slope at the north edge of the property overlooking the trail to prevent slope erosion.

On the south side is an oil-and-chip surface. A local Boy Scout troop contributed four Adirondack chairs for those who want to sit to take in the view. A new pavilion and restroom facilities built in the spring already have been used extensively. Assistant Director of Public Works Greg Culp said plans are in the works for a playground and tree-slung hammocks under the oaks there.

In addition to the public, EIU biology and recreation classes use the facilities. EIU’s Civic Engagement and Volunteerism department has students volunteering at the trails. “We have a lot of interaction with students,” Pamperin said, adding that the City hopes that the amenities will help the university in both recruiting and retaining students, as well as keeping them in Charleston after graduation. “The City is able to offer a lot of different things for the size we are,” he said.

The Lincoln Prairie Grass Trail connects Mattoon and Charleston with a crushed limestone trail that’s going to be upgraded to a multimodal trail. The goal is for people to be able to take a train from Chicago, get off at Mattoon and bike to Lake Charleston. “We’re trying to build this into a regional destination for mountain bikes,” Pamperin said, adding that Fox Ridge State Park, south of Charleston, has its own set of trails and that the Grand Prairie Friends’ Warbler Ridge trails, between Charleston and Fox Ridge, would ultimately connect everything in the region.

Birdwatchers frequent Fox Ridge State Park to see over 300 bird species, and the Lake Charleston area is home to a bald eagle family. There are two canoe/kayak launches at Fox Ridge, providing a 5-mile trip on the Embarras; boats are allowed on Lake Charleston, too, as long as they don’t go over 5 miles per hour.

For those who enjoy spotting smaller wildlife, the Urban Butterfly Initiative is creating butterfly hotspots in the Charleston Carnegie Public Library’s parking lot, at the Lake Charleston levee trailhead’s new pavilion, in Fox Ridge State Park, at the Loxa Road access to the Lincoln Prairie Grass Trail and in EIU’s Secret Garden.

Most folks retire as their careers wind down. Not so, for these two bird enthusiasts, or “birders” as they often refer to themselves.

In any artistic endeavor, whether it be music, painting or stained glass, there is the “art” of the medium, but also the “craft” of the creation.