Byron Denhart comes from a background in real estate construction management and first began thinking of the idea for a tiny home business after being laid off. “For whatever reason, it kept popping into my brain,” Denhart said.

When Denhart first proposed the idea to his wife, Jessica, she was hesitant – partly because they had a 6-month-old son — and continued to be for the next six months. The third time he brought it up, during a walk around the Wandell Sculpture Garden at Meadowbrook Park in Urbana, she decided to give him a chance to explain it more thoroughly. “I said, ‘You must have a plan,’” Jessica recalled.

Jessica grew up on Guam and admits that it took some time for the Central Illinois landscape to grow on her. “Over the years I fell in love with the prairie and stark beauty of it,” she said. “There’s this beauty about it that speaks to you.”

That love of the prairie and the way it seemed to tie into the company’s philosophy inspired the name. “I said, ‘What about Switchgrass? That has a nice ring to it,” Jessica said.

Byron said that with each build, they strive to make it both beautiful and functional. “She (Jessica) calls it simple elegance,” he said. “We believe in good design, simple design.”

“It is about the simplicity of it,” Jessica added.

They make an effort to use sustainable materials whenever possible, using salvaged or reclaimed materials from sources like PACA (The Preservation and Conservation Association). They have even used a kind of lumber called beetle kill pine reclaimed from the devastation of Colorado’s mountain pine beetle.

Jessica said the quality of Byron’s work is what sets him apart. “He is a craftsman and a perfectionist,” she said.

Each home is unique and customized for the homeowner. “We take pride in what we do,” Byron said. “We start by asking them a lot of questions, so we get to know them very well, what’s important to them, not only in their hobbies but in life.”

Homeowners sometimes design their spaces to accommodate things they enjoy doing, such as cooking, baking, canning or crafts. “It’s not about living without,” Byron said. “It’s getting rid of the clutter.”

A major life change often precipitates someone choosing to buy a tiny home, according to Byron. “It’s a very philosophical thing,” he said.

“It’s not necessarily minimalism so much as essentials,” Jessica said. “What am I paring down to live my life more fully?”

Switchgrass is now building a home for a Peoria couple who are moving to Colorado’s Southern Rocky Mountains. The couple already has a home built out there, off grid, and the tiny home on wheels, which is specially designed to withstand high altitudes, is for the wife’s mother, who is going with them.

Other homes have gone to Georgia, Louisiana and Los Angeles, and a tiny coffee house that was featured on the DIY Network’s “Tiny House Big Living” is outside of Nashville, Tenn. “We’ve been talking about mobile tap rooms,” Byron said.

“As more people choose to go tiny, we’re trying to find places for people to land with these houses,” Jessica said.

Byron believes there could be a market for tiny homes locally with land values being relatively high. He has met with some local government and municipality leaders to explore options and is encouraged by what he’s hearing. “In this area it’s still a little bit of an unknown thing,” he said. “But they’re willing to listen. We really want to get a community going here locally.”

Those who don’t own any land can create a hybrid tiny house by building it on a semi-permanent foundation. For those who want to try out micro-living, there are even tiny house hotels that are for rent by the night. Byron believes there’s a market for that locally, with events like the IHSA wrestling tournament filling up Champaign-Urbana hotels quickly. “From an investment standpoint, it’s a good return on investment,” he said.

There are also RV parks that have rental lots available for people to bring in their own tiny houses. Something like that could be useful locally to traveling professions like professors and nurses, as well as grad students, Byron said.

Byron said he often has to dispel the notion that tiny homes are similar to mass-produced recreational vehicles. “These are well-built structures,” he emphasized.

The Denharts are trying to pass on their values to their 3 ½-year-old son. He even has his own toy workbench and likes to pretend to work on builds.

Switchgrass recently hosted an event called A Day of Tiny Living with Lodgic Everyday Community in Champaign, where they had the company’s model home and current build on display. There were tours throughout the day, and Byron gave a couple of talks as well.

Lodgic Workplace Director Marissa Siero said Switchgrass’ philosophy about communities and sustainability meshes well with Lodgic’s, so a partnership made sense. “We were excited to host them and have the conversation about tiny homes,” Siero said.

Byron agreed. “It’s about experiencing, not about things,” he said. 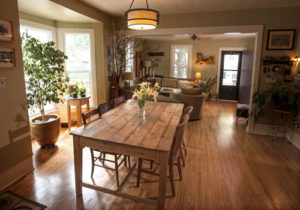 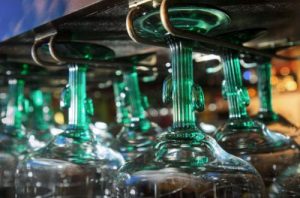 Spicing things up for 25 years