Jim and Angie Walsh had a rough time when they first moved into their old farmhouse north of Potomac.

Jim and Angie Walsh had a rough time when they first moved into their old farmhouse north of Potomac. During that bitter-cold December, the plaster walls in the home built in 1912 were crumbling and had to be repaired. “I wouldn’t wish that job on my worst enemy,” Jim Walsh said. “It took about a year to get it all livable again,” Angie Walsh added.

Still, there was something about the house. “From the time we moved in, we felt like this was home,” Angie Walsh said.

Since that time, the Walshes have added onto and modernized the house. Outside there is a huge swimming pool and a deck, and Angie Walsh enjoys landscaping with flowers.

Lewis and Kate Messner were the home’s original owners. Lewis Messner was a doctor, whose office was in what is now the entryway, but at that time was on the side of the house. Jack and Anne Prillaman, businesspeople who owned a Potomac car/implement dealership, moved into the home in 1939 and owned it until the Walshes bought it in 2010.

The home is decorated with antiques with a bit of a modern twist. “I like to decorate with things that mean something to me,” Angie Walsh said.

One sign on the wall bears the names of Jim and his father, Burdette Walsh, and used to be on one of their grain trucks when they farmed together. Two framed aerial photos depict the homestead where they now live in the early 1970s and more recently. Photos on the walls throughout the home tell the story of family members throughout the years. The Walshes’ son, Adam, is the third generation of the family to farm. Jim’s grandfather worked in a cereal plant at Paris, Ill.

Angie Walsh is a retired second-grade teacher, which is evidenced by many of the home’s decorations. Displayed are two letters from the same student – one he wrote to express his appreciation for her as a second-grader, and the other he wrote to thank her as he was going off to college at Eastern Illinois University.

The Walshes knocked out some walls to open up the area between the kitchen and the living room, creating one large space. They had a green shag carpet removed to reveal the original oak floor.

One of the home’s most unique furnishings is a kitchen island made from an old square grand piano that Anne Prillaman bought from a funeral home. The Prillamans had three sons; one named Tom was married to a woman named Jean who passed away in the midst of remodeling. As a tribute to her, the Walshes covered the back of the piano island with the sheet music for the parlor song “Jeanie with the Light Brown Hair.”

The largely glass porch gets a lot of solar heat, so on cooler days the Walshes leave the door open and let it heat the rest of the home.

The living room has a table that Jim Walsh made from a wheel from one of his father’s wagons and has corn and soybeans in the center of it, under glass.

The office has a window that used to be in the kitchen. A valance at the top was created from bedrails that the Walshes found in the attic. The walls’ farm decorations include a bill of sale from a farm sale, a photo with a coon dog and the house from the dairy farm where Burdette Walsh once lived.

The master bedroom has a gas fireplace that the Walshes’ cat, Shirley, enjoys warming herself in front of. A door was switched to make more of a master bathroom. What was originally a sewing room was changed into a laundry room and a guest bathroom with a beach theme. A linen closet that was painted white was stripped to reveal the wood beneath. Angie Walsh’s great-aunt’s brass bed sits in a guest room with a nature theme. A vintage window serves as a collage-style frame to display various kinds of leaves in the divided panes of glass.

One of Angie Walsh’s most treasured furnishings is a cradle built by her great-grandfather, Jacob Klein, in 1876. It has held generations of babies in her family, and she even made a small plaque for it to explain its history.

One of the home’s most unusual features is a basement bomb shelter with doors that open in, which Jack Prillaman added. Prillaman, who had been a tail gunner during World War II, even had flak jackets and bunk beds in the concrete-reinforced cinder block shelter; a safe there is too heavy to be moved, and the Walshes don’t know if there’s anything inside.

Both of the Walshes’ children are grown and out of the house, so it’s just Jim and Angie living in the large farmhouse. “It’s amazing how much of the house we live in,” Angie said.

Jim Walsh said the home’s many windows are one of his favorite parts about it. “We have a view, no matter what room we’re in,” he said.

Jim Walsh gives credit to Eric Rademacher of Gifford for designing the kitchen and to Stan Remole and Dave Carter of Potomac for all of their carpentry work on the home. “They’re craftsmen,” he said. 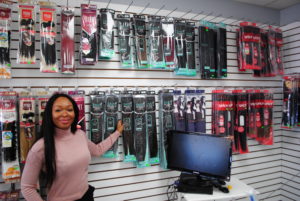 A whole new you! 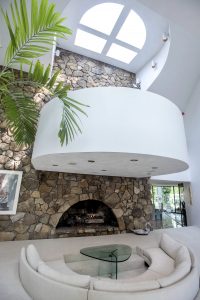