Dressed in crisp red, white and blue uniforms, a color guard stood at attention during the singing of the National Anthem between baseball games at Parkland College in Champaign.

Dressed in crisp red, white and blue uniforms, a color guard stood at attention during the singing of the National Anthem between baseball games at Parkland College in Champaign. Nearby a group of veterans of various ages lined up near home plate to be recognized, flanked by players from Parkland and Danville Area Community College who were holding their caps over their hearts.

The scene took place at “Mission 22” Day, an event held to call attention to a Department of Veterans Affairs study that found that each day, at least 22 American veterans who have faced difficulties adjusting when they return home take their own lives.

The Illinois state ambassador for Mission 22, Charlie Downey, grew up in the same area as Parkland baseball coach David Garcia, and Garcia taught Downey’s daughter in that school district.

“I reached out to him because I really wanted my guys to start having more interaction with veterans,” Garcia said.

Garcia’s grandfather was a World War II veteran, and he wanted his players to develop the kind of respect for veterans that he was taught, so he invited Downey to speak to them.

“He started opening up to everyone about Mission 22,” Garcia said, adding that his players instantly connected with the message.

“I think they saw it was an opportunity to use baseball as a forum to bring the subject of traumatic brain injury to the forefront and have people be able to talk about it,” Garcia said. “It wasn’t something we wanted to stay away from. The statistics were mind-boggling. It’s unbelievable, it’s sad. We just wanted an opportunity to help in any way we could.”

“I wanted to show respect to the veterans who were on hand,” Garcia said. “Once you serve, you’re always serving. You give part of your life.”

The effects of war are long-lasting, according to Garcia.

“My grandfather died at age 83, and he was still dealing with PTSD,” Garcia said. “This is an ongoing issue.”

Garcia hoped to help erase the stigma associated with PTSD and with the depression that leads to suicide in the general population.

“It hit home with my players,” Garcia said.

Garcia has gotten a lot of positive feedback about Mission 22 Day.

Mission 22 is a nonprofit organization that raises awareness about veterans’ suicides. Three veterans who had battled Post-Traumatic Stress Disorder (PTSD) founded it in 2013 as a company called Elder Heart and started with art therapy out of a barn.

The organization created a 22-foot-tall sculpture called Soaring that features 22 steel leaves in Nashville, Ind., to represent the 22 veterans who lose their lives every day. The sculpture was being seen by over 3 million people every year at the artists’ community.

“It got a lot of attention,” Mission 22 Public Relations Director Diane McCall said.

Elder Heart then started a campaign to raise awareness about the 22 veterans committing suicide each day.

“It caught on so well they legally changed their name to Elder Heart DBA Mission 22,” McCall said.

One of the organization’s main goals is to get veterans into treatment for PTSD.

Mission 22 partners with other organizations to pay for veterans to get into Brazilian jiu-jitsu training, equine therapy and service dogs.

Mission 22 is working with a doctor from Chicago who specializes in endobiogeny and schedules Skype appointments so that veterans do not have to travel. The doctor studies samples of the veterans’ blood to determine what is out of balance and creates tinctures to restore that balance. There are currently over 100 veterans in treatment.

“The goal is not to mask it but to reverse it,” McCall said.

Mission 22 created a mobile monument called the War at Home Memorial that features silhouette cutouts of real veterans who lost the PTSD fight, each of which is 10 feet tall and 4 feet wide. The memorial, which has details about their lives and service at the base of each silhouette, started out in Texas and is now in Norfolk, Va. Next year it will be in Tulsa, Okla.

Mission 22 has over 3,000 ambassadors who go out and set up information booths to raise awareness and to raise money for treatment. A total of 88.46 percent of the funds Mission 22 raises go back to veteran treatment, and the organization’s goal is to raise that figure to 90 percent.

McCall, a Champaign resident, knew some people in Mission 22 and became involved after she learned more about it.

“It’s hard talking about a heavy subject like suicide,” McCall admitted. “But it’s great to know we may possibly be saving some lives out there.”

Mission 22 is not associated with the VA or the military and is funded through donations and the sale of Mission 22 merchandise. Third parties sometimes host fundraisers like golf tournaments for them.

“People are very generous in holding events for us,” McCall said.

One thing Mission 22 does not do is promote alcohol since some veterans abuse substances in an attempt to self-medicate.

Mission 22 tries to dispel the misconceptions associated with PTSD.

“There’s a lot of people – veterans especially – that think you’re weak if you ask for treatment,” McCall said. “It’s believed that the number of PTSD cases is so prevalent now because we don’t celebrate them (veterans returning home) like we used to. Unfortunately, we don’t have the right words to get them into treatment. There’s a saying that if you ask a veteran if they have PTSD they’ll tell you no but if you ask their family, they’ll tell you yes.”

Some veterans hesitate to reach out for help because they fear losing their VA benefits.

“We don’t share any information with the VA,” McCall said. “It’s totally anonymous.”

Mission 22 is starting a new Mission Troopers program to get kids involved. Children would earn badges as they take part in activities with veterans.

“We won’t be talking necessarily about suicide with them but about respecting veterans and honoring them,” McCall said.

To learn more about Mission 22, how to donate or to become an ambassador, visit its website, www.mission22.com. Those who are interested in applying for treatment can do so there as well.

“We check every e-mail,” McCall said. 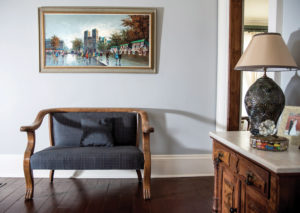 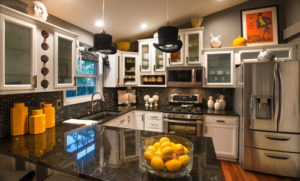 Bring on the glam

When Theresa and Thomas Kohl bought their St. Joseph home in 2004, it was very beige. The walls were beige. The carpet was beige.