Featured: Two homes into one

Two homes into one

Near Georgetown, the Emmerts’ farm is always bustling, and depending on the time of year, they’re either planting or harvesting. The family dogs, Annie, Abby and Auggie are there to greet guests with a little good-natured barking to let their family know they have company. A beautiful two-story home sits amid tall trees just far enough from the winding country road. This home looks like it’s possibly 20-years-old at the most. Looks are deceiving, though. This home has a big story to tell.

Around Georgetown-and all across the prairies of Illinois-storms typically come in from the southwest, following the Jetstream. “In this case, a storm atypically came out of the northeast,” Norman Emmert said. His wife, Norma Emmert, sat close by and nodded her head.

If they had only known that the following minutes were about to change their home forever. “What happened next sounded like a giant flyswatter hitting the house,” Norma said. And to be honest, that “giant flyswatter” not only forever changed their home, it changed them, too.

The Emmerts are the owners of Terra Plana Family Farms, a multi-generational farm near the towns of Georgetown and Catlin in Vermilion County. “Terra plana means, “flat land,”” Norma said. Norman and Norma are proud of their rich agricultural heritage. In fact, they met in the 1950s in Brazil, Indiana, married and decided to move over to east central Illinois because of the great farming opportunities in Central Illinois. So, they farmed and thrived. They had a growing family. Things were going well, until that stormy day, June 23, 1995, when the storm that defied the Jetstream moved through the area.

And anyone that has gone through a major catastrophe knows that rebuilding can be a challenge. The Emmerts made it look easy. When they speak of it, they relay the experience as if it was a great opportunity to make changes and improvements. This is what successful people do: they embrace “change,” knowing full-well that change is always an inevitable part of life, and they take the opportunity use it to their advantage to make changes for the better.

After the storm, they realized that they no longer had a living room and two bedrooms. They were there one minute and literally gone the next. Farmers, however, are used to the weather affecting their lives. The Emmerts are also smart and successful, not prone to rash decision-making. They knew they had to carefully decide what they should do next. They figured they would sleep on it. “We actually slept on the floor,” Norma laughed. Norman agreed with a laugh himself. It’s easy to see why this couple has been married for 66 years. “We debated on whether we should rebuild or build something new,” Norman said.

The Emmerts always liked the look of the old house down the road. “It had belonged to the Carson family at one time,” Norman said. “I would look at that house and knew it could be so much nicer-looking with a wrap-around porch on it,” Norma said. Norman said the Carson house never had running water, either. “It had a cistern,” he said. It was a very old house.

The house they had lived in for many years wasn’t functional for them anymore. This was their opportunity to build exactly what they wanted. So, they decided to move the Carson house to the property they cherished so much and put it right on top of where their old home used to be. Plus, they wanted to improve the old Carson house, too. “I really didn’t like the kitchen,” Norma said. So, they decided they would move the Carson house and sit it right where the old Emmert house had sat, but also add new parts-like the kitchen-to suit their needs. The Carson house wasn’t that far down the road, and it had good bones-as many old homes do-so they decided to get the old/new house started.

A good friend of Norman’s, Dean Galyen, was a great carpenter. “He built a lot of houses in and around the Georgetown area. He was the best. We got together and made plans,” Norman said.

They contacted a local home-moving company, Peters House Movers. “They were from Farmer City,” Norman said. “They really knew their stuff. They moved 50 houses in one year. That is amazing.”

So, by April 1996, plans started moving forward, and what destroyed the house in the first place, put another wrinkle in their plans: the weather. “It rained and rained. We knew we had to get this house moved by winter,” Norman said. They didn’t let that stop them. They kept moving forward. Dean and Norman started working on the plans for the new build that would incorporate an old home on top of the former home’s crawl-space, pour a basement and make a nice new addition. Remember, Norma didn’t like the Carson house kitchen, so, Norman climbed up on the roof and literally sawed off the old kitchen. They just left it behind when they moved the Carson house down the road.

“The house movers were amazing. Before they even moved the house, they cribbed and shimmed anything that didn’t meet the beams and was not perfectly square. They put shims in to make everything solid so they could move that house,” Norman said. Cribs are wooden boxes that are installed under the structure. Shims are pieces of material used to fill in spaces and gaps. They moved slowly, and it actually took hours to get the house moved from just down the road. It was quite a sight to see, and everyone in the area came out to watch the process.

In the meantime, the Emmerts lived in the Carson house before they moved it, as well as a tiny house at their hog farm, then a trailer, and also the basement, once it was poured. They laugh about it now. “They have always had a great sense of humor and a positive outlook on all of this,” Whitney Emmert, their granddaughter, said. She stayed at her grandparents’ house in all of the rebuilding stages: sleeping on the floor, the Carson house, the hog farm, the trailer and the basement while the build was being completed. She is very close to her grandparents. “I remember Grandma cooking for the farm-hands in a makeshift kitchen in the garage. Grandma is amazing,” Whitney said.

“I laid awake many nights thinking about how we should design the house,” Norma said. They had the opportunity to build the home of their dreams, and it was very exciting.

“Yeah, who has three houses, but were actually homeless? We were! But, there was a lot to complete, so we wanted it be done right,” Norman said. They finally moved in on September 1, 1996. The finished home is an amazing 3,000-square-feet of living space, plus a partially finished basement with pantry. “The basement concrete is 8-inches thick,” Norman said. The old home-the Carson home-is on a partial crawl-space, which is easily accessed from the new basement. The home has two-stories, three bedrooms, three bathrooms, a huge kitchen and dining area, large living room, sitting room and a home-office that is comprehensive enough for a large working farm. They rewired the electrical system, put in new plumbing, and had two furnaces and two air conditioners installed. They got rid of the plaster and put in drywall. The home has R-factors that meet and exceed current building codes, too. Beautiful appointments like quality flooring, baseboards, panel doors, a stairwell with decorative baluster, balustrade and bottom rail, and quality windows make the space all the more lovely. It is most definitely “comfortable-farmhouse-meets-luxury-living.”

“We also took apart the fireplace and put it back together in the house,” Norman said. He moved into the next room and showed the line between the living room and kitchen that is where the houses-old and new-are joined together. To be honest, one cannot even tell where it is. The blending of the structures is seemingly seamless.  “It has a 7/12 roof pitch, too,” he said. A 7/12 roof pitch means that the roof rises 7 inches for every 12 horizontal inches.

Plus, just like Norma always visualized for that old Carson home, a wrap-around porch was added with enough clearance for rocking chairs and flower pots, just what is needed to enjoy the Illinois breezes and the big and beautiful sky in the cool of the morning or on a starry summer night. The yard is expansive with flowers and garden areas all around the property, so pops of color literally greet the eye at every turn. It begs for one to sit, sip some iced tea and pet Abby, Annie and Auggie. “It’s good,” Norma said, nodding her head and smiling. “We like it.” 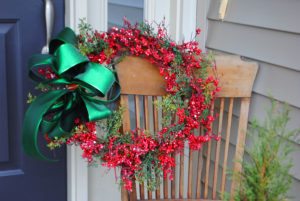 A happy circle on the door…or something more

Wreaths are a pretty common sight on a front door, holiday or not.