Artist's view: The wheel of life

The wheel of life

If Tom Brewer had not been extremely ill his senior year on 1967 at Champaign High School-the last year Champaign had just one high school- this story may just well have been about Brewer the accountant, not Brewer the potter.

If Tom Brewer had not been extremely ill his senior year on 1967 at Champaign High School-the last year Champaign had just one high school- this story may just well have been about Brewer the accountant, not Brewer the potter. This much celebrated potter and educator happened upon his life’s purpose in much the same we all do: by the very course of day-to-day life. Happenstance. “I missed three weeks due to a severe illness. When I returned to school, I was told I had missed too much of my bookkeeping class to catch-up on the material. So, I took a sculpting class,” he said from the Griggs Street Studio he bought in 2009. Brewer was there looking in on a massive amount of works that had just been taken out of the kiln. They were sitting there shining in the midday sun that was streaming through the gallery’s windows and fairly begged to be touched and explored. Pottery is beautiful, but it is also tactile. It is art, but it is useful, too. This kind of art has so many levels, kind of like Brewer himself.

Brewer is a snow-bird that has works in many studios: The Griggs Street Studio and Cinema Gallery, both in Urbana, The Prairie House in Springfield, The Carol Robinson Gallery in New Orleans, The Art on Douglas located in New Smyrna Beach, Florida, Florida Craftsman, Inc., in St. Petersburg, Florida, to name just a few. He was in Central Illinois for the annual holiday sale and open house in the gallery that was once owned by Betsey Cronan. The holiday sale was her tradition, and Brewer wants to keep that tradition alive. Over the course of his career he’s been in many galleries and countless select exhibitions in places like Akureyri, Iceland, Mississippi, New Jersey, Kentucky and Minnesota. And of course, Illinois.

Thema Fite was the art teacher who saw the interest and potential in her young art student. “She helped direct me. She made a great impression on me,” he said. From there he attended Parkland College and transferred to Southern Illinois University, graduating with a dual major in art education and ceramics.

Most artists do not get to enjoy the opportunity to be a working artist, but Brewer had a local gallery right away. “I had a gallery here in the area called the Locust Street Gallery. I lived in Ivesdale and Sadorus, too,” he said. Then, he taught kindergarten through grade 12 in the small district of Cowden-Herrick. “After two years, I came to the University of Illinois and completed my master’s in art,” he said. In 1985 he went to Florida, taught and then began working on his doctorate in art education at Florida State University, which he completed in 1989.

He’s passionate about art education-both in teaching art and teaching others to teach art. He’s done both. His resume is quite impressive, however, the best part is he is really down-to-earth, which is akin to the works he creates that originate from the earth themselves. He’s easy to talk to, he’s kind and he enjoys people. Pottery is beautiful, but is also useful. “For many years, I was dragging my wheel everywhere I went,” he said. He works on pieces that resemble ancient artifacts and upscale pieces that belong under a spotlight and celebrated on a nice block of marble or wood. He also creates pieces that are meant to be used, like mugs, plates and other wares that enhance daily living. Then, he creates those pieces that are inspired by life, like a great smile on a child, a large hog or an Illinois silos. “About that large hog. I saw a large boar pictured in the News-Gazette. He was an award-winning hog. He took up the full-frame of the photograph. He inspired these pieces, which I named, “Bacon’s Memory,”” he said.

He has his own original glazes, like his wood ash glaze. A huge shelving unit with jars and cans of chemicals sits in the studio that is reminiscent of a chemistry class, not an art studio. All colors and patterns can be enhanced by chemicals being added to the clay.

As he looked at the newly fired works he stopped and told everyone to listen.  Sure enough, these little sounds escaped the pottery. “That sound is called, ‘pinging.’ It is the sound of the glass fitting around the clay,” he said. Everyone in the room paused and listened again. It was like looking for a shooting star; that great expectation and then elation when it occurs. Even as a semi-retired artist, he still enjoys the process, the throwing on the wheel and the art. And the pinging.

For more information on Tom Brewer, his art or to add to your own collection, go to TomBrewerGallery.com. 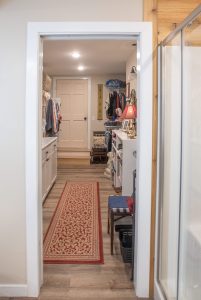 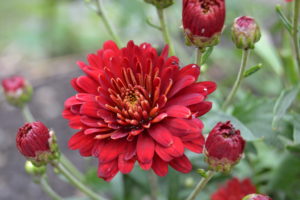 Lake of the Woods-Mabery Gelvin Gardens

The Mabery Gelvin Botanical Garden is located in Lake of the Woods Forest Preserve.